This article is not only about political scandals and intrigue…

Where can you buy the most expensive sandwich in the world? In an Italian mansion, now a magnificent hotel called CLIVEDEN. In the 2007 Guinness Book of Records the Essen Platinum Sandwich costing £100 was registered as the most expensive sandwich ever sold, it was ordered in the restaurant of the Cliveden hotel referred to as “The valley among cliffs” this romantically sounding title derives from the fact that it is nestled among some beautiful cliffs above the Thames in Taplow, England.

This hotel is not only well-known for their “golden” sandwiches...

The history of this Manor house began in 1237 according to some documents found in ancient archives. At 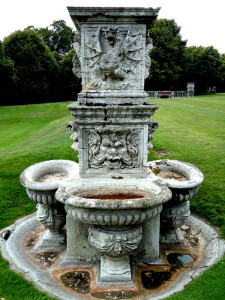 various times over the centuries the estate belonged to a Count, two Dukes, a Prince and a Viscount. Three times the Manor was rebuilt over many years, in 1795 the first house was burned down due to a servant knocking over a candle and in 1849 the second house burned down when decorators set off a fire by accident which completely destroyed it.

The modern mansion now used as a hotel was designed in 1851 by the architect Charles Barry in a Palladian style, Charles Barry is known for his project at Westminster (The House of Commons and the Chamber of Lords). George, the 2nd Duke of Sutherland and a one time owner rebuilt the Manor in the style of an Italian country house.

In 1893 the nouveau riche Lord Astor bought the Manor house and spent a fortune redecorating it with a magnificent huge hall, ceilings and walls decorated with panels from English oak, columns with wooden carvings and a 16th century fireplace brought over from a destroyed Palace in Burgundy. Most of the rooms were covered with tapestries and armor from the 18th century. One ceiling painted to represent the four seasons with portraits of the of Duke Sutherland’s children, (The only surviving element of the architect Charles Barry) was too beautiful to be destroyed so Lord Astor decided to keep it. The Rococo style French dining room, was acquired from a French Castle which was rented at one time by King Louis XV for his mistress Madam Pompadour.

Outside, the Parterre in the landscaped gardens is one of the biggest in Europe. Beautiful green pyramids,

wedge-shaped flower beds, and seasonal flowers adorn the Manor’s great park. A water garden with an island and a Chinese pagoda was acquired in 1900. 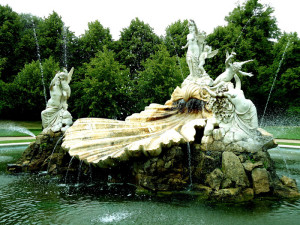 One of the more unusual features of the gardens is a collection of sculptures, most of which were acquired by the Astors at the end of the last century in Rome. The most impressive is “The Love Fountain” on the lime avenue leading up to the Manor house, it is shaped in the form of a sea shell entirely sculpted from Carrara marble, supporting three full-scale female figures accompanied by cupids. Finally there is a unique collection of eight Roman marble sarcophagi, some of them dating back to 100 years AD as well as a mausoleum and a lovely Tortoise fountain.

Beyond the beautiful formal gardens lie open magnificent landscape garden and woodland with breathtaking views of the Thames and all sorts of wildlife.

Cliveden is well-known for its political scandals. One of them was about, a small club of political intellectuals led by Nancy Astor known as the “Cliveden set”. A journalist from the communist newspaper “The Week” published an article where it was reported that communications took place between the club and Nazi Germany. Later, in 1972 a man named Christopher Sykes wrote that the whole story about the club and the Nazis was ideologically motivated misinformation.

The worst scandal to be associated with the Manor came in the 1960’s which involved a Secretary of State for War, a high class call girl and a Soviet Embassy official. The story goes that a London call girl named Christine Killer was the mistress of the Soviet military attaché Eugenie Ivanov based at the Soviet Embassy in London and at the same time was also on friendly terms with the Secretary of State for War a Mr John Profumo. Peter Right a person working in the British counterintelligence agency MI5, spoke with Miss Keeler regarding her irregular liaisons and discovered that there was an attempt by the Soviet Military attaché to obtain confidential military data from John Profumo via his affair with Miss Keeler. It was during the time of the cold war between the Soviet Union and the West! The consequences from the point of view of national security were extremely serious. Profumo’s relationship with the alleged mistress of the Russian spy caused his resignation and brought great embarrassment to the Conservative government.

Famous people have visited Cliveden at different times, including Charlie Chaplin, Winston Churchill, Joseph Kennedy, George Bernard Shaw, Mahatma Gandhi, F. D. Roosevelt and Rudyard Kipling and it still goes on today. Rich and famous people regularly visit this beautiful place. This five-star hotel can rent you a room from £ 462.00 a night and you can also order a “golden” sandwich for an extra £ 100.00. The history and magnificent beauty of this Manor house and park will never fail to impress you!

Much can be learned about some English history from Cliveden’s stories; so many famous names are connected with it and each one of them with a different tale to tell. The motto of the Sutherland family still remains on the radiators in some parts of the house, and has now been adopted as the hotel motto: “Nothing ordinary ever happened here, nor could it”.