In springtime nature wakes up with bright colours of green yellow and white, the beginning of new life is being heralded, so it is the right time to enjoy the virgin green grass and the budding of trees in all our parks.

Today I invite you to look at a photo gallery of an English landscaped garden.

The English landscaped garden was invented in the 1700s; this style of gardening imitates

views of nature. Compare to the “French style” garden with its geometric designs and structures, imposing an order over nature, the English landscape garden emphasize the beauty of nature, most times you cannot tell if it was a natural look or a human creation.

I have already written about the gardens of Stourhead, Cliveden and Petworth but the park at Stowe House is one of the first landscaped gardens which imitates nature to appear between 1730 and 1738 replacing the early baroque gardens with their French type parterres. Three great landscape architects Lancelot “Capability” Brown, Charles Bridgman, and William Kent all worked here at the same time.

belonged to the Temple family who had made a fortune in sheep farming. In the 18 and 19th centuries this magnificent park attracted visitors from all over Europe. British and foreign aristocrats like Queen Victoria and Prince Albert, John Adams, president of the United States, Stanislaw, the King of Poland, the Kings of Sweden and Denmark, the King of France, Louis the XVIII and the Russian Tsar, Alexander the 1st, as well as many other types of nobility have stayed in Stowe House.

Today it is being used as a private school but on certain days, the house is open to visitors. The landscaped gardens are now managed by the National trust and all year round, you can visit and enjoy the beautiful views, artificial lakes, streams, dams, bridges, temples, pavilions, grottoes and artificial ruins, all these features are designed by man to create the illusion of a natural landscape. You cannot help but stop and admire how attractive and naturally beautiful it looks.

bridges erected around England. The exact copy was established in Tsarskoye Selo for Empress Catherine the Great of Russia.

Some buildings in neo-gothic style have been constructed 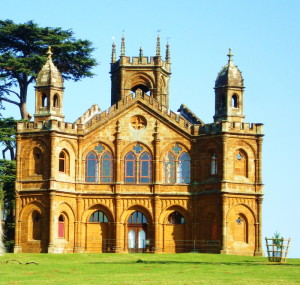 One of them has an inscription above the door from the French poet Pierre Corneille stating “I thank the gods I am not a Roman”.

In the Temple of Ancient Virtue, constructed in 1737 by William Kent, there are four sculptures: a politician from Ancient Greece Epaminondas, a lawmaker Lycurgus, the poet Homer and the philosopher Socrates.

The temple of British worthies with a curving wall contains

16 niches with statues of British celebrities, eight people famous for their activities, like King Alfred the Great, and eight famous scientists, like Isaac Newton. 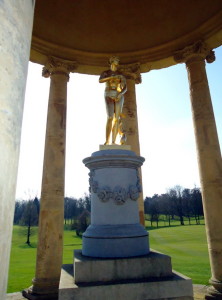 The Rotondo temple, the circular temple, has recently had a gilded statue of Venus replaced in the center.

The Grotto has a marble statue of Venus rising from the bath and is located near the river that flows through the Elysian Fields.

There are statues of seven Saxon deities, named after the days of the week, like the god of Sunna being the god for Sunday. These sculptures are the work of John Michael Rysbrack.

The Temple of Concord and Victory built in 1760s was converted into a monument to the victory of Britain in the Seven Years War.

Photo galleries of more beautiful landscape gardens like Virginia Water, Claremont, and Kew Gardens will be on here soon in the near future.