The deserts round the Dead Sea are places where ancient Qumran manuscripts where found, as well as the cities of Sodom and Gomorrah from the Book of Genesis, it is also the lowest point on earth. The surface of the Dead Sea is 400 meters lower than the level of the World’s Ocean. Unfortunately the sea level is falling annually by about 1 meter, that’s why some experts claim that it will disappear from the earth in the not too distant future. 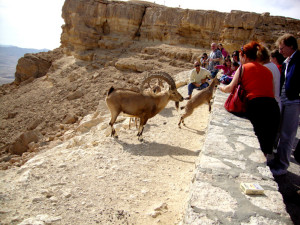 One day on a very warm sunny day in November, some friends and I 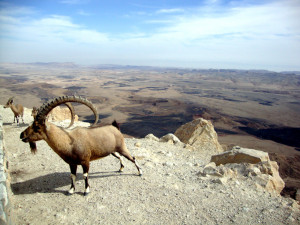 were driving through the Negev desert in Israel, my impression of a desert soon changed as we drove through mountains, along winding and twisting roads all heading to this unique place. The desert with its bright yellow sand dunes and blue sky, constantly changing to shades of white, orange and brown doesn’t leave anybody indifferent to its nature. I never realized before that the beauty of the desert, with empty miles full of rich colors without a single bush or green tree could fascinate me so! We stopped half way along the road were Nubian Ibex’s (a type of mountain goat) welcomed us with their play, unfortunately, we did not have any food for them but they posed perfectly for our photos. Funny how these animals made the desert feel alive for me.

The Dead Sea appeared on the horizon as a mirage; it did not seem like a sea at first with the whitish colors

of salt merging with the blue horizon. Finally, after our long travel on the empty desert road, we came across lots of beautiful hotels with green palm trees appearing all along the coast. 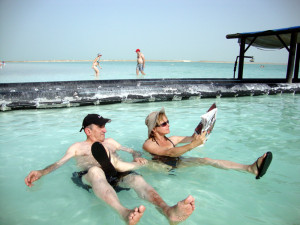 You should enter into the salt water of the Dead Sea gently as the bottom is covered with salt crystals which can easily cut your feet. The salty water is so heavy that it is possible to semi-sit or semi-lye but impossible to sink. One must also be very careful not to turn over and allow your face to go in the water as you can burn your eyes with most unpleasant consequences.

The sea was named Dead because nobody assumed that any animal can survive in this salty water. But actually, scientist discovered some micro organisms and some of the tallest mushrooms live in this water. The saltiest water in the world is well known for its healing properties. It is recommended that the first dip be no longer then 20 minutes in this salty bath but then I personally wanted to go into this oily liquid again and again which envelops the body with the soft feeling of a gentle touch. Later on at the end of the day, my body was fully relaxed and there was a great desire to lie down and do nothing. That night my friends felt exactly the same and we all slept like a baby.

Nevertheless, be it the active influence of human civilization or natural erosion, the Dead Sea is under 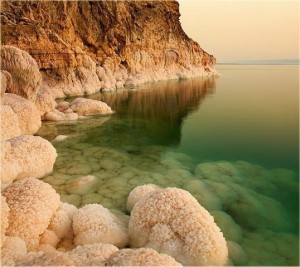 serious threat of disappearing forever. Jordan offered a way of rescuing it by pumping up water from the Red Sea into the Dead Sea. It will require up two billion cubic meters of water annually, otherwise, it will disappear in about 50 year’s time. With global warming this could happen even earlier so do not miss the chance to visit this amazing, beautiful, and fascinating sea.