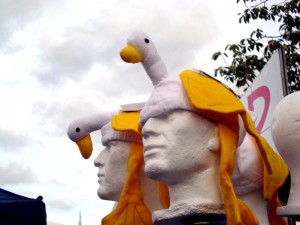 How many legends do you know about geese? In China the goose is considered like a love and marriage talisman. In Rome geese saved the city from conquerors, defenders of the city were woken by cackling of geese when Gauls began storming the town walls.

In England there has been a traditional goose fair for 700 years. Nobody knows exactly the story behind this fair. From documentary sources, the Charter of King Edward of 1284 there is a mention of city fairs in Nottingham. They tell about 20,000 geese that were annually driven for hundreds of miles from the Counties of Lincolnshire, Cambridge, and Norfolk to the market place of Nottingham. The paws of the geese were covered with a mixture of pitch and sand to protect them during their long walk. 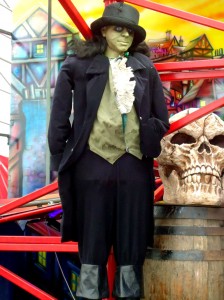 Let’s imagine for a moment how this fair would have been in reality, how it was originally a long time ago. Remember there were no roads, thousands of people, beggars, farmers, rich men, medieval singers, and sometimes even colleagues of Robin Hood who lived in Sherwood Forest would join in this procession. Dancers, acrobats, minstrels, medieval singers, and lots of other entertainments and games would be offered to the crowd. Smells of hot food mixed with the moos, cackle and bleating of the animals being sold in the market square. 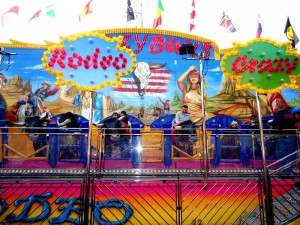 How the world has changed since those wonderful days thanks to the invention of electricity and modern transport. Today, it is the biggest traveling fun fair in Britain, an entertaining, extremely cheerful and bright show, a holiday for children and adults alike, 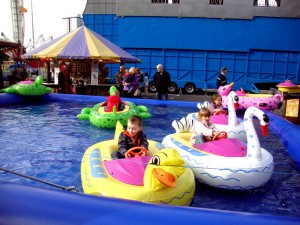 not forgetting romantics and thrill-seekers. Traditionally, there would always be lots of things to eat on offer, like bacon rolls, fried potatoes with fish and mushy peas, as well as grilled chicken and boiled sausages. All that is left from this ancient goose festival is just the name and the tradition. This year when I visited, I didn’t see any live or baked geese at this event, only a group of small plastic geese floating in an artificial pool to entertain the younger visitors.

The legend regarding the history of the Goose fair could be true, because we have Michaelmas day. The feast of St Michael which was celebrated on September the 29th a long time ago. It was usually held at the end the agricultural year and the beginning of the new season. Farmers had a belief that to eat a fried fat goose on this day would help to bewitch the following year and secure a good harvest. Students of many colleges especially at Oxford and Cambridge followed this tradition too. For them, the partaking of fried goose on this day provided them with prosperity and success for their academic year.

A lot of ancient traditions have been forgotten in England in the 70s and 80s although, lots of restaurants still offer traditional fried goose on Michaelmas day. Similar festivals are celebrated in many European countries, but never forget that there are two different types of geese, the green goose of Michaelmas, which is normally fed on fresh grass and is never as fat as the goose we normally eat at Christmas time which is fed on wheat to fatten her up for winter.

These are just some goose traditions. So, whoever did not manage to fry a goose last October, it is not too late for there is still a chance, Christmas is coming, so go get your goose!