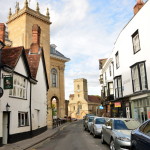 When I visited Abingdon, I was fascinated by the originality and antiquity of this town, which is considered one of the oldest in the UK similar to Colchester, Amesbury, Ipswich or Thatcham. Some settlements in present Abingdon-on-Thames have existed since the 4th century BC.

During the Roman period in the 1st and 2nd centuries, fortifications were built around the town that proves its importance at that time. Legend has it that the 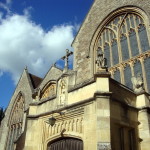 Roman Emperor Constantine was born here. In honor of his mother 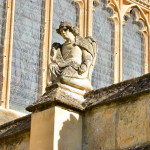 Helen, the Church of St. Helen was founded. Chronicles first mentioned this church in 995 AD, rebuilt repeatedly over the centuries it survives to this day. This church also contains a very interesting historical relic – a wooden panel that shows the family tree of William Lee, once a mayor of the town, who died in 1637 and left behind 197 descendants.

The Church of St. Helen was built on the site of a monastery, founded in the year 166 AD and 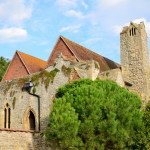 from historical writings; it is the second-oldest church in England after Glastonbury. William the Conqueror celebrated Easter here in 1084. It is also known that his son Henry the 1st was educated in the monastery. 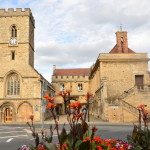 The name of Abingdon is associated with St. Abban, according to legend he was the only Britt to escape the original Night of the Long Knives in Stonehenge when the Saxons massacred the Brits. In the fifth century AD St. Abban built himself a hermitage in the north of Abingdon, where the Benedictine Abbey of St. Mary was founded later. During the dissolution of the monasteries by Henry VIII in the 16th century the Abbey was one of the six richest in England. The town had flourished in the middle ages and a bridge was built on the Thames as the town was situated on the trade route from London to Bristol. 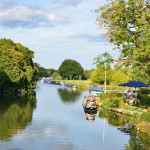 The bridge, which is now more then 550 years old, is a historical 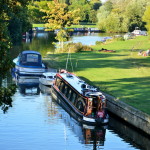 landmark with picturesque river banks all along the Thames where a lot of boat travelers and cruisers are enjoying the life that was described by Jerome K. Jerome in his novel “Three Men in a Boat.” 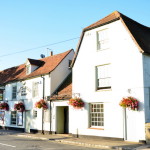 In the middle of the river by the side of the bridge there is an island surrounded by willows where a pub called “The Nags head” is nestled with riverside gardens. Most Sundays you can listen to live 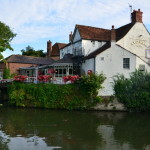 jazz music on the island whilst enjoying barbecued food and a drink. In addition, the town has a very old Morris Dancing tradition. In June, the inhabitants of Ock Street elect a Moyor of Ock Street and hold parades around the town. But it appears that Morris dancing is prevalent throughout the year as I was able to see a performance during a visit one autumn day at a local pub. 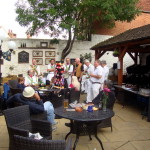 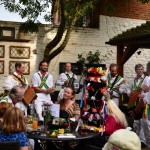 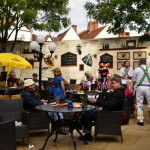 Abingdon is a main town of the district in the Vale of the White Horse, named after the Uffington White Horse, one of the oldest 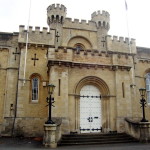 Geoglyphs in Britain that 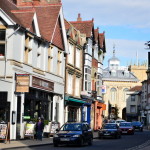 exists on a hill in Oxfordshire. Jerome described it as follows in his book (“Three men in a boat”). “Abingdon is a typical country town of the smaller order – quiet, eminently respectable, clean and desperately dull. It prides itself on being old but whether it can compare in this respect with Wallingford and Dorchester seems doubtful”. He may have been right but it certainly did not feel dull to me.