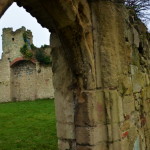 The ancient town of Wallingford in the Thames Valley at the foot of the Chiltern Hills was founded by Britons and until the 9th century AD was just a small village. During Saxon times, King Alfred the Great, who led the kingdom of Wessex after his brother’s death, fortified the town to protect it against the Vikings. Ancient fortifications completed by William the Conqueror and the ruins of a medieval castle mote and bailey, built in the 11th century for Queen Matilda of England, have survived to this day and are the main historical relics of the town. 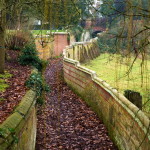 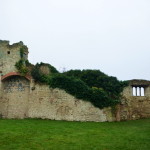 best-preserved fortifications in England. The castle was one of the most magnificent castles in the 11th and 12th centuries. Up to 1349 Wallingford was a royal residence. The fortified and walled town flourished as a trading centre as it was situated on an important part of the river Thames. Wallingford was the only crossing place over the Thames for several miles, where eventually a stone bridge was built. In the 15th century the construction of a bridge in the neighbouring town of Abingdon, stopped all trade routes from London to Gloucester from passing through 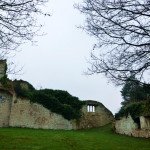 Wallingford, which gradually began to decline, until it’s revival in the 18th century during the civil war.

Wallingford Castle stood up to the Parliamentarians and survived a 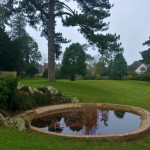 16-week siege. Subsequently, Cromwell ordered it to be destroyed and much of the stones were removed and used to strengthen Windsor castle. Nevertheless, all the preserved ruins of the castle, especially the fortifications around it, are still quite impressive as historical monuments. 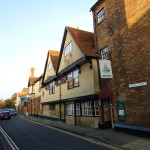 Jerome K Jerome, author of “Three Men in a Boat”, lived near Wallingford and knew the history of this town and mentions it in his famous novel.

with many preserved narrow alleyways, three churches and several historic hotels. In one of the hotels, the «Lamb Inn», William of Orange was one of the hotel guests in 1688.

Not far from the “Lamb Inn” that is now an antique centre, there is a 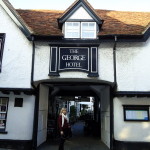 very old inn called “The George”. This public house is awash with legends about ghosts and a love story. During the Civil War one girl’s lover was stabbed in this pub. The girl mixed her tears with soot from the fireplace and drew pictures on 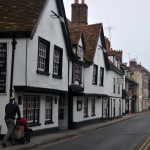 the wall in the shape teardrops with her finger, which have survived for 400 years. In addition, “The George” was a favourite place of the well-known English highwayman Dick Turpin in the 1700s. Legend recalls that he jumped out of the top floor window unto his horse Black Bess, which was tied in the archway below to 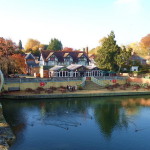 Near the bridge, in Wallingford there is another beautiful pub called the “Boat House”, which is crowded with visitors all year round in all 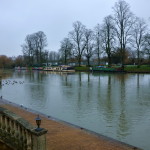 weathers, because it happens to sit on a very picturesque stretch of the River Thames. My next story along the river Thames will be about the old town of Abingdon.