Colchester is the oldest recorded town in Britain. It is built on the spot of the ancient capital of the Roman colony at the time in Britain named Camulodunum. Before the Romans it was the center of the Celtic tribes of Trinovantes whose leader was Cunobelin (described by Shakespeare as Cymbeline). The Roman novelist Pliny the Elder who died in AD 79 and the Roman historian Thucydides mention the city of Camulodunum in their writings. You can still find bits of Roman wall and some remains of

ancient buildings in parts of the town. There was a temple to the Deified Claudius in Roman Colchester, built in 43 AD, because the Roman emperor was at the same time revered as a priest, an atheist and a God and thanks to him the borders of the Roman Empire were considerably extended. 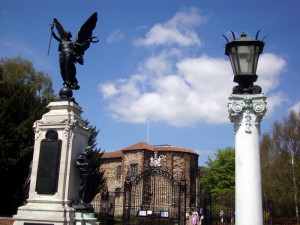 In 61 AD the town was heavily destroyed after Bodicia’s rebellion against the Romans, so the capital of Roman Britain was transferred to a new place and the name changed to Londinium, now London. Dr. John Morris the English historian in 1973 suggested that the name “Camelot” of Arthurian legend has some connection to Camulodunum. Camelot was a castle of the legendary Celtic King Arthur, with his Knights of the Round Table. Different writers placed the Round table in different places, like Winchester in Hampshire and Caerleon in Wales. Will this new assumption have any truth in future? 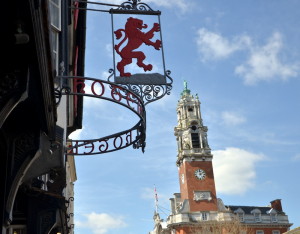 The name Colchester occurs from the Latin word “castrum” meaning the fortified place. Another legend says that the town was named after the folkloric hero Old King Cole, a legendary ancient king of Britain. In etymology the name Colchester means “the Cole’s Castle“. Helena the daughter of King Cole married a Roman senator. They say that Helena’s son was the Emperor Constantine I. Helena was canonised as Saint Helena of Constantinople and is today’s patron saint of Colchester.

The town was granted its royal charter in 1189 by King Richard I. Colchester developed as the center of the woolen clothes industry and became known all over Europe for its homespun woolen fabrics of a redish-brown color. In 1550 a large number of weavers from Flanders immigrated to Colchester; there is still a Dutch Quarter and many Tudor buildings in the town. Once upon a time Daniel Defoe, journalist, spy, writer and author of “Robinson Crusoe” lived there. He wrote in one of his books that Colchester lost 5259 inhabitants during the plague epidemic of 1665.

The medieval Colchester castle was built by Normans in the 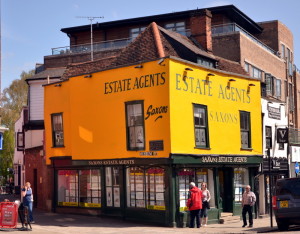 11th century on the foundations of a Roman temple. It has a long history and was once a Royal castle, then a prison, where suspected witches were imprisoned in 1645 and in 1648 leaders of the English revolution were executed there. In 1650 the castle was sold for 5 pounds and in 1683 the new owner tried to pull it down and use the stones as building material, fortunately this did not happen. The castle was eventually restored in the 18th century and is now having further restorations which will take till spring 2014 to complete. 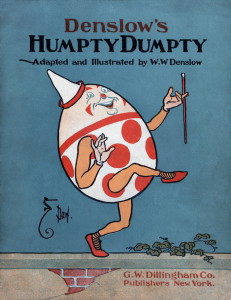 While historians continue to excavate artifacts and relics in various ancient settlements, literary critics are investigating a story about one of poetry’s hero. The much loved story of Humpty-Dumpty who looks like a humanoid egg portrayed in children’s rhymes and fairy tales, was in fact born in Colchester. There are a lot of theories and versions relating to the history of Humpty-Dumpty. Katherine Elwes Thomas in 1930 assumed that its prototype was King Richard III, who was humpbacked, and was defeated at Bosworth Field in 1485. There are many other versions as to where this name came from. In 1996 a history appeared about events in 1648 during the English revolution. Humpy-Dumpty was a very big cannon and named so because it was very fat and heavy. The cannon was placed on top of a wall by Royalists at St Mary’s Church in Colchester. A Parliamentary cannon blasted the wall and Humpty-Dumpty fell off the wall. So the rhyme goes “All the King’s horses and all the King’s men couldn’t put Humpty together again”. In 2008 the author Albert Jack wrote in his book that he found verses in a very old book in some dusty library, that the analyses of these verses come to the same conclusion. Whether true or not, makes no difference today, but it’s a beautiful and amusing story. By

some oddity Humpty-Dumpty turned into the fantastic character of many a children’s stories. Particularly in Lewis Carrol’s “Through the Looking-Glass” (1872) where Humpty appears as a wise man. The first rhymes about him became known at the end of the 18th century and then in “Mother’s Goose in Prose”. To this day all children in many countries adore funny fat Humpty. I believed in this history about Humpty-Dumpty from Colchester. Do you? Russian version Back to main page