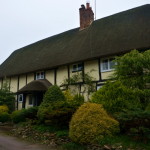 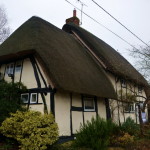 centuries, these villages also grew a gigantic variety of apples in their many orchards, unfortunately, a lot of these varieties are no longer available to the general public but a few people in the village have recently bought a large plot of land and will be growing these wonderful rare apples once again. 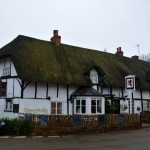 On the 4rth of January 2015, I happen to pass the Red Lion a CAMRA award-winning pub in the village of Sotwell. Stopping for some refreshment, I spotted a notice announcing some form of celebration later that day. I understood from some of the locals that it was an ancient pagan ritual where people go around villages waking up the trees for the start of the New Year. Apparently, this was only performed in this village once before in 2014 and was a great success. 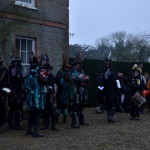 At 3.30 pm a band of musicians accompanied by several members of a dance troupe known as the Armaleggan Border Morris dancers, gathered at the war memorial in the centre of Sotwell, as lots of people from the village and other areas arrived, I noticed that most of the children were carrying three foot long sticks to beat the trees, they now all formed a procession and a long column walked to the forecourt of Brightwell Manor where they started to play old English music originating from several parts of the UK and dancing very much like Morris dancers, except these dancers were carrying long sticks, had blackened faces, fancy multi coloured costumes and lots of feathers in their headdress.

After almost an hour of celebration and lots of dancing they 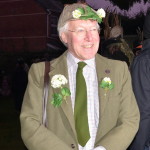 proceeded to parade through the village to a house with a very big garden where a bonfire was lit and a shotgun was fired twice at the trees by a man dressed as the village squire to wake them up. Then from a big steaming pot nearby, a brew called Wassail made from (apple cider, honey, sugar, cloves, allspice, ginger, nutmeg and cinnamon) was individually served in plastic cups 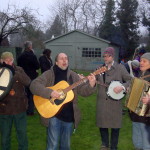 to all the people who had gathered there. This particular brew offered that day was described as Lambs wool mulled cider; it was very aromatic, sweet with bits of apple and very warming on a cold foggy evening. During this period a lot of songs were sang and lots of music was played on guitars, drums, concertinas and accordions. 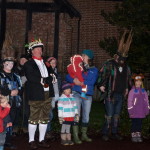 Once again everybody as if in a grand parade followed one another to a forecourt nearby, this 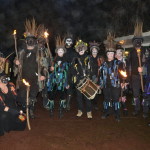 time they gathered all the children and spent sometime teaching them a special dance for the occasion, the children and a lot of grown ups made a very large circle and started to dance, clapping hands and singing, one just could not help but dance as an atmosphere of joy and laughter pervaded all around the village. It was at this time that the band and dancers all gathered together for a group and individual photographs taken by the visitors. 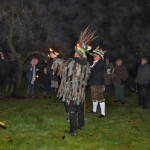 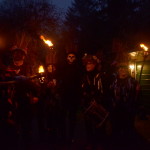 As darkness descended and a full moon appeared in the sky surrounded by a huge ring of freezing fog particles, lots of hand held torches were lit, illuminating the darkened village. The now very large group of people followed the band carrying the lighted torches to an orchard where they sang a special Wassail song about the trees urging them to produce a good harvest, (Here’s to thee, old apple tree, that blooms well, bears well, hats full, caps full, three bushel bags full an’ all under one tree) then they all shouted Wassail. Wassail! Followed by beating the trees with their sticks and once again the man dressed as the village squire fired both barrels of his 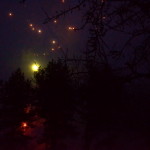 shotgun at the trees, all this was done to wake them up, banish all evil spirits and feed all the good ones. Shortly after there followed a wonderful firework display from a nearby orchard just across the way.

What now seemed like the inhabitants of the village as well as many visitors, they all formed a procession down the centre of the main road all the way to the Red Lion Public house, which has existed there for many centuries. 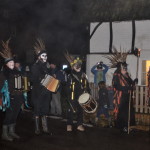 Stopping outside and completely blocking the road, the band played 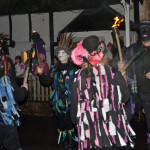 as the troupe started to dance various dances with lighted torches, some of which originated from as far as Gloucestershire. The ceremony ended to great acclaim from everybody.