They say “all roads lead to Rome “. Many strait roads, according to researchers, were founded by the ancient Romans and you can find evidence of the Romans having been in England. They founded many cities and towns. One of them is Bath, which was established as a spa resort. Curative thermal sources were known long before the appearance of the Romans, The Bath springs are the only hot springs in Great Britain. Water temperatures can reach 96 degrees Celsius at a depth of 4000 meters and thanks to a natural geothermal system eventually rise to the surface having been cooled by up to 46 degrees. Natural hot baths with all the magnificence of a Spa service are the heritage of a Roman civilization. The Romans built the Bath house and a temple dedicated to Sul, (a Celtic god) and Minerva, (a Roman goddess). This they hoped would please two gods at once.

There is also another legend from ancient times, about prince Bladud, the father of King Lear who was suffering from leprosy and was sent away to look after some pigs. The pigs were also sick with a skin infection but after they wallowed in some hot dirt, they were suddenly cured. So the prince followed their example and also got well after bathing in this mud. Eventually he became the King of England and founded the city of Bath. 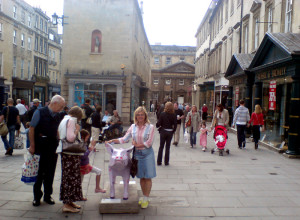 I visited this city for the first time in 2008 and never heard anything about this legend. Therefore I could not understand why there were so many pig sculptures all 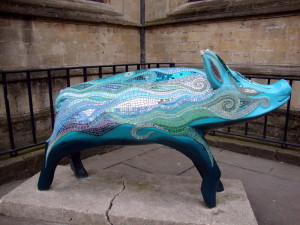 around the city streets. A thought came to mind that there has to be a legend connected with these strange pigs! I was right, the city was celebrating, the art festival of “King Bladud’s Pigs in Bath” that day and was organized to commemorate this special event. 104 ornamental sculptures of pigs decorated many streets and were eventually sold at auction to raise funds for two Greenway road tunnels in the city.

Whether the Romans or the Prince founded this city, nobody can 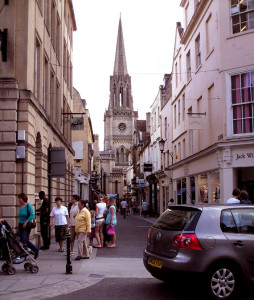 say for sure today. Legends over this also exist to enhance history with a peculiar sort of charm. But we can be surer about the history of Bath in the 18th century when it became famous as a fashionable place to visit. Members of the Royal family, most of the nobility, high society and the beautiful people of London visited this resort. There was a special social group in England named the Dandies, representatives of the middle class, fans of fashion and chic with special aristocratic manners, refined speech, and elegantly dressed gentlemen, which character is best described as boastful and coddled in Charles Dickens’s story “The Posthumous Papers of the Pickwick Club”. But never mind about Dickens! Not only did they become famous in literary novels but a recent statue of the most well known dandy of them all Beau Brummell was erected in Jermyn Street central London. In those days Dandies used to visit City of Bath every summer. The Master of Ceremonies Beau Nash was well known in those days as “the king of dandies” who entertained society. 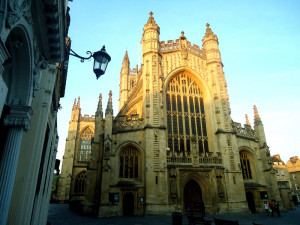 What attracted people to Bath all those years ago? The refined

Palladian and Georgian architecture has attracted many people to this city for many years. Bath has Georgian buildings made from honey coloured stone. A Medieval Abbey in Gothic style where the first king Edgar of a united England was crowned in 973. It has a beautiful Palladian (Poultney) Bridge through which the river Avon flows and was also used as a shopping mall like the ones in Europe. Poultney Street may have some really beautiful Georgian terraces but the most spectacular of Bath’s terraces The Royal Crescent is well-known throughout Europe, constructed more than 250 years ago it is now considered an architectural classic!

Today Bath is a magnificent place and cultural city for tourists, with

lots of musical traditions evolved over the years, with numerous organ concerts, because Bath Abbey is home to the famous Klais Organ. Annual competitions of bards are well known as well as competitions to find the best singer, poet and story-teller. This tradition stems from the middle ages when wandering bards not only entertained the public but were also chroniclers of history. Perhaps, thanks to them, myths about druids, prophets and healers survive to this day as well as the legend of the Lion and the Bear which are represented on the emblem of The City.

You can admire the harmony of beautiful architecture when walking along the streets of Bath and possibly learn something about history but the English Bath of today really began from the Roman bath house all those years ago.