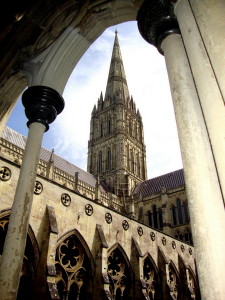 A long time ago the Bishop of a Cathedral in the city of Sarum decided to build a new temple as the old one did not offer much divine service. By tradition to define a holy site, he had to let go an arrow which accidentally landed on a deer and wounded him. On that place where the deer died, a magnificent Cathedral was erected in 1258. Today Salisbury Cathedral with a spire of 123 meters is the tallest in the United Kingdom. The city of New Sarum was built next to the cathedral and is known today as Salisbury. 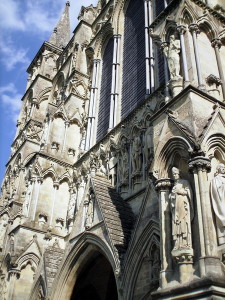 style and looks divine with it’s statues of angels, archangels and apostles. And I always ask myself the same question, why modern architecture erected from glass, 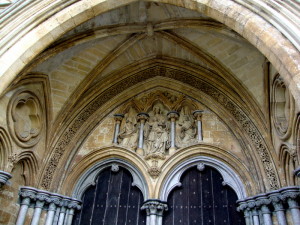 metal and concrete with the technologies of the 21st century is so poor and monotonous compared with the man-made beauty of the medieval architectural masterpieces? Maybe some experts could explain this to me. The second question that comes to mind is when I see certain objects of some people’s religious cultures and beliefs. Some of the best masterpieces of human creation seem to always belong to some form of religious institute. What magnificent burst of human endeavor helped to create such beauty? And what inspired today’s creations with their boring metal and concrete exteriors covered in mirrored glass? 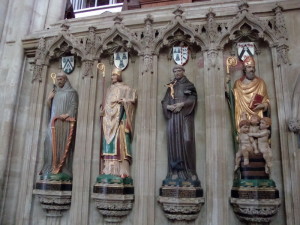 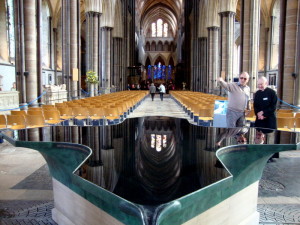 Spire” by William Golding, who got the Nobel literary prize in 1983 “for his novels, which with the perspicuity of realistic narrative art and the diversity and universality of myth, illuminates the human condition in the world of today”.

In the Cathedral there are a lot of relics. One of them is the oldest mechanical clock in the UK, which does 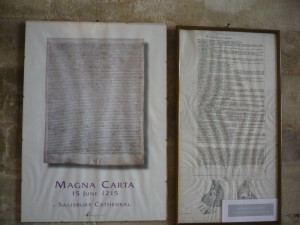 not have a dial since when they were created, they could only tell the time from the ringing of bells. Another unique document is the best of four copies of the Magna Carta signed by King John of England in 1215. The Great Charter of the Liberties of England had for the first time granted freedoms to the English people. It does not matter that these freedoms turned out to be only philosophical and an illusion for many. The main thing is that it remains a historical document of great importance and some of it still makes up part of the British constitution today. 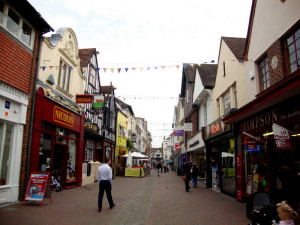 The history of settlements in Salisbury, according to statements from archaeologists, is about 5000 years old. The well-known megalithic monument Stonehenge located not far from the city attracts tourists because of its greatness, originality and unsolved riddles. In the city of Salisbury there are a lot of unique historical places with legends and secrets.

A strange announcement appeared in an English 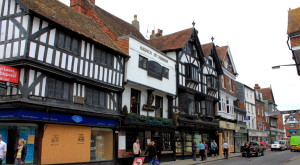 newspaper in 2004: “The mummified hand has been stolen from its display case at the Haunch of Venison pub… Anyone who knows where the hand is, should contact the Wiltshire Police.” The story goes that the relic was found in 1911 during the restoration of the Pub and stored in the pub for almost a century. The mythical hand, which clutches a number of 18th century playing cards, is thought to have belonged to a gambler. Possibly, someone chopped off his hand and threw it into the fireplace fire when caught cheating whilst playing cards. This hand was exhibited behind glass in a room at the Pub named the House of Lords and attracted many visitors over the years. Fortunately, the hand was found or rather appeared unexpectedly just as it had disappeared. In 2010 history repeated itself, the hand unexpectedly disappeared from the pub once again and all the newspapers published announcements of its disappearance, after a few weeks the hand reappeared in its glass case. They say the ghost of “the cheating card player” often appears in the center of the pub. 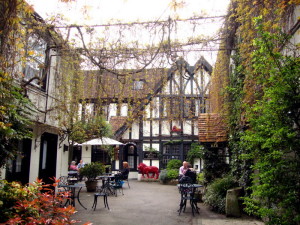 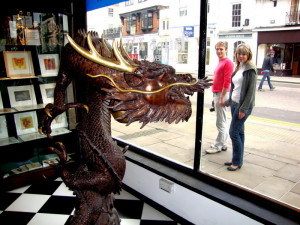 imagination. As for to the owner of the pub, all this attention is just great for business. Especially as the pub has been known to exist since 1320, in those days it was the home of one of the master craftsmen involved in the construction of the cathedral spire. There are lots of other lovely ancient pubs along very beautiful streets with age-old houses. 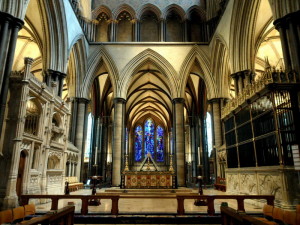 Music festivals, annual carnivals, and centuries-old fairs are the traditions of this city. You won’t hear the peal of bells in this city as there are only three cathedrals in England that are without bells and this is the one of them. But when you visit this temple, you may hear fine choral singing, organ music or even indulge in philosophical reflections and dreams about the human soul… Because “all roads lead to the temple…”