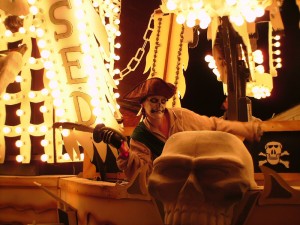 Every year in autumn something very exiting happens in the county of Somerset. The West Country Carnival. Giant illuminated processions are held in an English tradition that dates back as long as 400 years. Some of these processions are so fantastic they rival those of Brazil in illuminations and decor. This particular carnival travels from one city to another from the middle of October to the middle of November bringing joy and excitement to anyone that cares to stand and watch. The processions last about two hours in some towns, whereas in others it takes 4 hours for all the floats to pass by.

I visited one of the towns called Shepton-Mallet – this small town in the county of Somerset, was very sleepy, and quiet at four o’clock in the afternoon. The empty streets promised no pleasures of any sort, small local shops with hardly any visitors and quiet pubs. Then suddenly at about six o’clock the town started to change, lots of people started to arrive, car parks filled with cars, and the high street was now packed with people carrying umbrellas and cameras. The weather was cold, chilly, and miserable, one of the worst days in November, but the rain had stopped which was a good bit of luck. Should you feel like warming up a little with something hot, it was not a problem, there were plenty of mobile cafes where you could buy lots of appetizing things, from freshly cooked hot dogs and potato chips to a fragrant mulled wine. 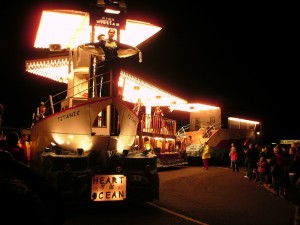 At last you could hear some music in the distance which signaled the start of the procession. As the music grew louder the first trailer appeared round the corner of the street, now the town was transformed into a glorious mix of children’s faces, smiling adults and a general holiday atmosphere. Now the procession was passing by and what a marvelous sight that was. About one hundred illuminated floats with themed scenes from children’s stories to modern movies and traditional tales, was slowly moving along the road. Each caravan had a loud sound system with music to match the dancing, and animations. You could not help but admire the costumes, the actors, the decorations just 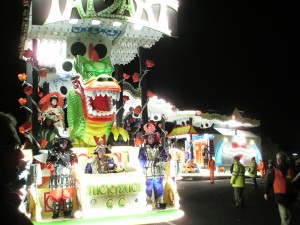 as much as the bright illuminations from the electric light bulbs. There were scenes from Titanic, scenes of an English family drinking tea, scenes of children’s fairy tales, Cleopatra with Pharaohs, Cowboys and Indians and a great static theme of Mozart and Salieri.

Some of the people brought their own chairs and sat along the road, some were in large groups arriving by coach, but just like me most were standing along on the pavement watching the carnival go by. Some English people watched the whole event absolutely 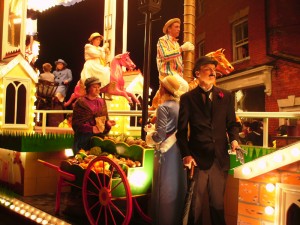 quiet as if such things occur every day, They are what I call the passive audience, people who do not show much emotion. Probably, just the national habit of English reserve…