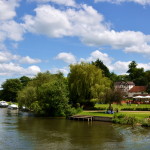 Sonning looks more like a pretty decoration along the Thames than a real village. Jerome K. Jerome’s described the fairy-like village on the 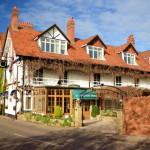 Thames in his novel “Three Men in a Boat.” And it still looks the same after more than a hundred years. Almost all the houses in the village are timber framed cottages mostly painted white and old houses made of red brick are smothered in greenery. It grew in this valley of the river, where the weeping willows sink in water and paths along the precious meadows lead away from the bustle of the cities. 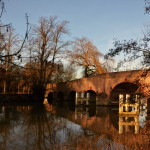 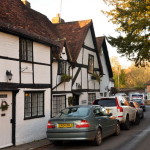 The name of Sonning is derived from “Sunna,” who was the chief of East Berkshire in Anglo-Saxon times. The village was an important stopping post for travelers and merchants on travels west via south Oxford in the middle Ages. The Wooden bridge over the River Thames was first built in 1125 and the latest modern brick bridge spanning 27 arches was built in 1775 this was another unique monument in bygone days. 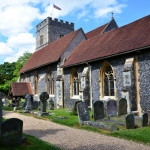 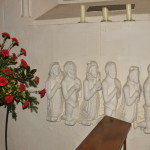 St Andrew, which has existed since Saxon times. There is a fine collection of brass monuments and sculptures of famous people who created history in the settlement and a lot of the Anglo-Saxon carvings. In 909 Sonning was the center of Episcopal Berkshire and had a Cathedral, some fragments of which can be found in the present tower of this 13th century church, which was restored during the Victorian age.

In the 13th century the Bishop’s Palace was built in an area known as Holme Park, which has 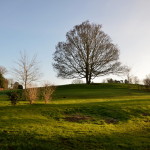 not survived to the present day. The Bishop of Salisbury made Sonning a pilgrimage center by adding the relics of St Saric in the chapel of St Andrew. The timber-framed building known today as the “The Bull” an inn and public house next to the old church was in the 16th century the guest house, where pilgrims stayed. 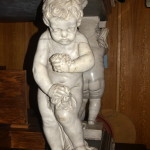 A very unusual monument has been put away under the tower of the church and if you do not know about its existence, it cannot easily be located. It has four cherubs holding a 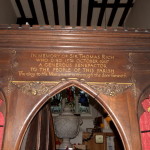 marble slab, topped by two very large urns. In 1667 this sculpture was named as “the vilest paganism imaginable”. It was dedicated to Thomas Rich, a member of parliament, who owned the estate of Holme Park in Sonning in 1654 and was a merchant and benefactor to the school for the poor in Gloucester and the “Blue Coat School” from Reading, which still exists today when it was moved in 1947 to the original lands of Holme Park. 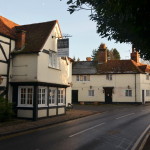 «Great House», known as the “White Hart” before 1989, in memory of King Richard II, whose personal emblem was a white hart. After Richard was deposed from the throne and imprisoned in the Tower in 1399, his wife Isabella of Valois was kept prisoner at the Bishop’s Palace in the village. 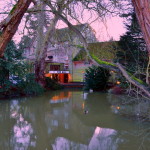 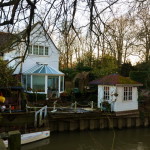 old bridge established in about 1086. The Mill prospered for centuries ever since 1086. Daniel May owned the mill from 1797 to 1851, when the biscuit factory of “Huntley and Palmer” was opened in Reading; the May family supplied all the flour. The Mill was subsequently modernized by new owners in 1898, when a steam engine was installed. In 1962 it was brought up to date with Electric power although the mill still used it’s water wheel until its closure in 1969. This was the last existing water mill on the River Thames. In 1984 the Mill was converted into a theatre with dinning next to the original watermill visible though a glass partition. 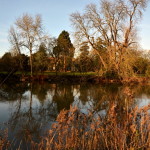 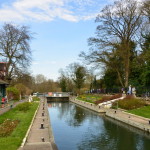 House) of the 17th century made of yellow stone and listed for important historical monuments, where the May family dynasty who owned the mill lived for centuries. Unfortunately, you can no longer admire this beautiful architectural mansion, as it is not visible from the road. In 2014 the American film actor George Clooney who joins a big list of famous residents in the village purchased Aberlash House. 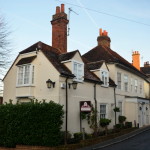 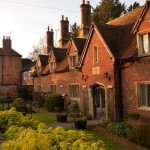 Sidmos in the High Street, where French Admiral Villeneuve, a commander at Trafalgar was detained during the Napoleonic wars. Also here is the cottage of Robert Palmer a member of parliament and a benefactor of the village from 1793 to 1872. Other famous personalities who lived or are living in Sonning are Uri Geller the illusionist, Paul Daniels the magician, Jimmy Page from “Led Zepellin” and John Lord of “Deep Purple” as well as many other celebrities. This is also the place where the famous highwayman Dick Turpin also lived. 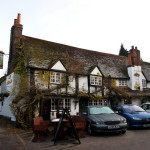 The most pleasant place in the village is undoubtedly the “Bull” inn. It’s name derived from the coat of arms of Henry Neville, steward at 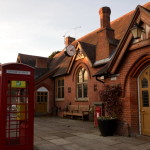 the Bishop’s palace after Queen Elizabeth I acquired it in 1574. Jerome commented on it as “A veritable picture of an old country inn, with green, square courtyard in front, where, on seats beneath the trees, the old men group of an evening to drink their ale and gossip over village politics; with low, quaint rooms and latticed windows, with awkward stairs and winding passages”.

How wonderful that such beautiful nooks like Sonning village with it’s pub still exist today in their original form to be enjoyed by all of us who care to visit! 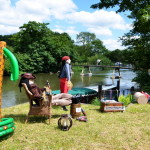 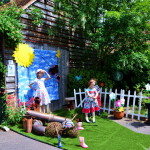 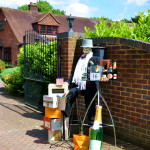