Winchester the ancient capital of Britain is keeping alive the legend of King Arthur and the round table. In the Great Hall of this ancient city there is an artifact of the round table hanging on the wall, inscribed with the names of Arthur’s 24 knights and depicts Henry VIII of England sitting above a Tudor rose. It is by no means the original table but it was done and installed in 1511 by order of Henry VIII.

In the legend, Arthur was the son of the king of Britain; he

was raised by Merlin the magician and later, educated by older knights. After his coronation Arthur received a gift from Merlin, a round table in order to administer justice in Britain. In the capital, Camelot 24 of the best knights in the Kingdom gathered around the table and all were deemed to be of equal standing. To this day it has not been established where Camelot actually existed, it could have been in Winchester, Colchester or Camel ford in Cornwall. Winchester still keeps the ancient tradition going, when 24 assessors meet at the roundtable thus preserving a historical continuity.

Near the Great Hall there are the ruins of an ancient castle,

built in 1067 after the Norman Conquest. A totally unique garden named Queen Eleanor laid out in the style of a medieval landscape is situated behind the Great Hall, I have not seen such a small and pretty garden anywhere else on my travels.

In the 9th century AD Alfred the Great defeated the Vikings and proclaimed Winchester as the capital of the kingdom of Wessex. Later King Canute the Great of Denmark made the city the capital of England, which remained so, until the 17th century, when London became the more prosperous town. Many historic and medieval buildings have been preserved in Winchester. The combination of different architectural styles gives the city a unique appearance, like the City Hall, built in 1871 in a Gothic style, also one of the oldest houses built on a timber framed carcass, there is the ancient market place “Butter cross” from which all roads radiate, built in the 15th century and the old bridge over the River Itchen.

Building of the Cathedral in the 9th century is on the site of an Old Saxon church. In 1393 it was rebuilt in a Gothic style and today is one of the oldest and the longest Gothic Cathedrals (169m) in the world with frescoed walls and stained glass paintings. In the Hall houses there are many other ancient relics to be seen. 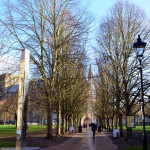 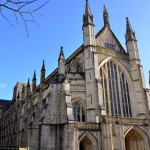 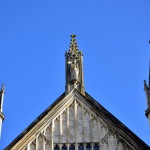 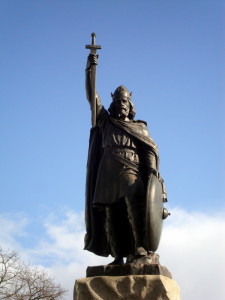 The main monument in the city is the statue of Alfred the Great,

who not only laid the foundation for the unification of England, but also made a lot of reformations in the country, like the creation of the first compendium of national laws “True King Alfred.” The legends of King Arthur’s knights about an honest and fair justice, is still alive today in the British justice system. However, if King Arthur of the legend supposedly during the 6th century which is preserved in chronicles, manuscripts, monasteries and literary works, did ever exist, no official confirmation has ever been made by any historian.