The Suvorov’s Oak near White Rock 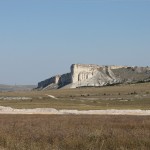 The Crimean Peninsula, in the form of a soaring bird crashing into the Black Sea, is washed from the east by the Azov Sea, the shallowest sea in the world. The beauty of its natural landscapes with three climatic zones blends beautifully with mountains on the seacoast which smoothly flow into the steppe. This blend of flat plains and forests, not only fascinates but borders on mysticism and mystery. Whoever has been touched by the mystery hidden in these gorges will want to return here again.

This summer, my friends and I traveled to some of our favorite bays, mountains and villages. But, first of all we went to see the birth of the new ‘road of life’, the “Tavrida” 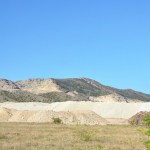 , which will incorporate the new bridge from the Taman Peninsula of Russia over to the Kerch Strait of the Black Sea, then through the Crimean steppe to Simferopol finishing in Sebastopol. The bridge will connect the peninsula, which was closed off by the Ukraine on the Perekop Isthmus, joining it to the mainland. The road is being built at a rapid pace and the first cars will drive over it in December of 2018. This event is awaited with impatience by the Crimean’s and all who love to visit this wonderful land.

We looked at the section of the new road 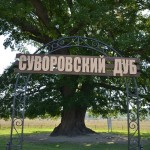 which is under construction on the way to visiting the White Rock. Near the White Rock in the village of Yablochnoye grows a huge 18-meter spreading oak, with a trunk circumference more than 12 meters, whose age is about 800 years. It is also called the ‘Four Brothers’ because of the four branches that are fused together. The oak entered history as the Suvorov’s Oak, since the history of Crimea and with Russia began there. According to legend, in 1777 there was a meeting of the Russian commander Alexander Suvorov with the envoy of the Turkish sultan. The Turkish commander decided to intimidate Suvorov and, showing him a handful of poppy seeds, he said “Same as you cannot count the number of grains in my palm, so you cannot defeat my army”. To which Alexander Suvorov replied by showing a figure of three fingers using a pod of red pepper instead of a thumb. This being a very rude Russian gesture. The next day the Russian army surrounded the enemy which was four times greater and three days later the Turkish army fled from the battlefield by sea through the port of Feodosia. The following events led to the Crimean Peninsula being annexed to the Russian Empire. 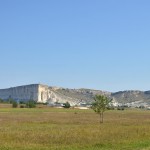 The White Rock is very recognizable as many films have been shot there. The rock rises 100 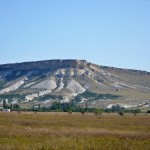 meters above the valley and seems out of place in this stepped landscape. The main rocks consist of nummulite limestone, which consists of spirally wrapped shells from the bottom of the ancient ocean of Tethys, preserved for millions of years and look like coins, the word Nummus translated from the Latin word coin.

The whimsical protrusions of the rock were formed by sandy corrosion, wind, rain and sun. Mountain hollows and ridges over many centuries have been shaped into grottoes and caves. One of the caves is 52 meters above sea level and at its base in years gone by, the ancient Sarmatian tribes lived there. On a small area in this place, archaeologists discovered 17 ancient 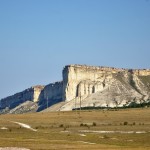 sites and settlements. At the top of the rock, several burial mounds 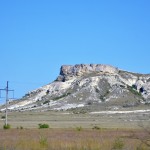 were found, where the Scythian generals were allegedly buried. In the Middle Ages, the summit of the rock was also a place of execution. In the city of Karasubazar meaning market on the Black River, located on an ancient caravan route, there was a slave market, where Tatars brought slaves for sale after raids on foreign lands. It was from the top of the Ak-Kaya mountain, that sick and exhausted prisoners were thrown to their death.

Since the time of Catherine the Great, in the steppe Crimea around Belogorsk, village plantations with beautiful names like Aromatnoe, Tsvetochnoe and Crimean rose, began to grow essential oil plants like sage and mint. Passing through fragrant lavender fields our route took us through to Simferopol and on to the Martian lake.