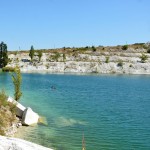 The Martian lake is located between Simferopol and Bakhchisaray. Martians did not come here and there’s nothing here that could remind us of the red planet. The lake appeared on the map of Crimea quite recently and the history of its origin is very unusual.

In the village of Skalistoye there was a quarry, during Soviet times, Inkerman white limestone was mined there for the construction of Crimean palaces and embankments, a huge layer of which was discovered near the ancient 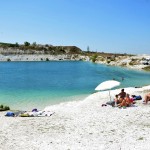 cave city. Once the diggers accidentally broke through the underground spring, its course was disturbed and the water 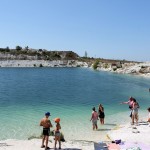 gradually began to fill the pit. Powerful pumps were used to try and pump out the water but it continued to pour in. Soon, the quarry with snow-white shores was completely filled with crystal clear turquoise water. A lake was formed with an almost rectangular shape about 10 meters deep and it continued to expand …

The lake was called the Marble Sea and the Rocky Lake. But for some reason the most popular adopted name was the Martian Lake. No one can explain why, perhaps, because of the unearthly unreal beauty of the lake and because of the lack of vegetation around it, almost like 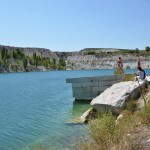 on Mars. Over time, the reservoir began to be surrounded by trees. Most likely, romantics have come up with such a name, because locals call this reservoir just a lake. In recent years, the ‘alien’ lake, as it is now known, has become a favorite holiday destination for many Simferopol citizens as it is not far from the Capital. Bathing in the turquoise transparent water of the Martian Lake cheered us up, it was unforgettable and incomparable with swimming in the sea.