The town of Theodosia on the Black Sea coast of Crimea is one of the oldest towns, founded by the Greeks from Miletos in the 6th century BC. Theodosia is 25 centuries old, that’s older than London, Paris and some other European cities. The Greeks called the town “Theodosia”, which translates to “God given” in English .

In the 6th century BC Greeks built temples similar to those of the Acropolis in Athens,

unfortunately nothing has survived to this days but many valuable artifacts, such as statues of ancient gods and gold ornaments were found during excavations in the 18th century, under the direction of the artist Konstantin Aivazovsky, who lived in Theodosia during that time. The world famous “Theodosia earrings” are currently exhibited at the Hermitage museum in St. Petersburg.

In the 3rd century AD, Theodosia became part of the The Bosporan Kingdom which was an independent state on the east side of Crimea, now known as the Kerch peninsular.

In the 4th century AD it was totally destroyed by the invasion of the Huns, a group of nomadic people who first appeared in Europe from East of the Volga river. 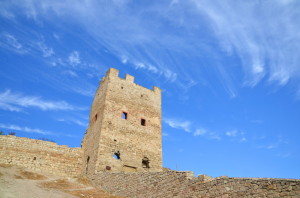 In the 5th century AD it came under the control of the Byzantine Empire, the predominantly Greek speaking part of the Roman empire in late antiquity whose capital was Contantinople now known as Istanbul.

In the 6th century AD the Khazars from an empire known as Khazaria possibly today’s Khazakstan occupied the town for a very long time.

In the 13th century AD it was conquered by the Tatars a native people from the Volga region of Russia.

However, the most blooming period in the history of Theodosia was in the 14th and 15th centuries, when Genoese traders now Genoa in Italy entered into an alliance with the Golden Horde, a Mongol state established in Russia after the break up of the Mongol empire, and actually bought part of the coastal zone along the Black Sea in Crimea which included Theodosia and made the area self-governing. 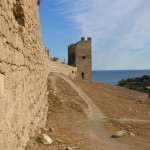 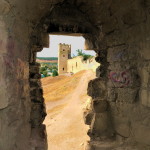 View of the old town from fortress 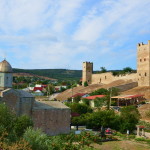 Church of St. John the Baptist XIV and Genoese fortress

The oldest surviving monuments in Theodosia are the remains of the Genoese fortress of the 14th and 15th centuries in an area called Quarantine, originally the centre of town but now the oldest part. The Genoese renamed the town Kaffa and the whole of Crimea was named as the “island of Kaffa”. Kaffa is also was mentioned in many chronicles like “pearls of the sea” as a pearl of the Black sea.

At that time the town was an important port on the Black Sea coast of the Crimean peninsular, located on the Silk Road from Italy to China. The Genoese made Kaffa a prosperous trading town with a population of about 70 thousand people. It was one of the most populous towns on the Black Sea and the Mediterranean. There was even a Bank, many beautiful houses, palaces and magnificent temples with fantastic fountains.

In the 1345 AD troops of the Mongol army of Jani Beg besieged the Genoese fortress, but his assault was not successful as his troops began to die from the disease known as the “Black Death”. It has been assumed that Jani Beg’s army catapulted infected corpses into the Kaffa fortress in order to weaken the defenders. Unfortunately, infected Genoese sailors sailing back to Genoa introduced the Black death into Europe.

The disease rapidly spread across Genoa and then across most of Europe by ships and caravans. Later special barracks were built for the inspection of all incoming ships in the area of Theodosia known as Quarantin, a word still in use today to separate and restrict the movement of well persons who may have been exposed to a communicable desease. In the same area of the town there was a big Black Death cemetery, this part of town still retains the name Chumka, which means Black Death in Russian.

know as the “Dock tower” still standing today protected the eastern part of the town and the entrance to the Harbour and was used as the sea gate of the city. There is also a unique bridge still in very good condition, the only XIV century bridge still in use today in the whole of Europe. Finally there is a monument on the edge of the fort next to St. John’s Church, of

Athanasius Nikitin, a Russian merchant who visited Kaffa in 1472 and one of the first Europeans to travel and document his visit to India via 3 seas.

The hill Tepe Oba starts in Sebastopol and ends by the Cape of St. Elias, stretching into the sea and surrounded by Theodosia Bay to the south, with a very rocky shore and small bays . A Lighthouse has been built on the site of the old church of St. Elias and according to legend, was funded by a merchant who was twice shipwrecked there.

On the north-west side of Tepe Oba we have “Lysaya” the bald mountain , which also has a

mythical legend. Because nothing ever grew there, it was named Lysaya meaning bald in Russian, fortunately, it has now been planted with pine trees and is bald no more.

From the old quarter of Quarantine, as you walk down the old streets on the approach to the port area of the town, you reach a very interesting park. It does not look

particularly special but has an unbelievable history. On the land of Morsad, that’s how they named this park, one of the largest on the Black Sea coast, a huge slave market existed in medieval times. It is well known locally that a significant proportion of the income of medieval Kaffa was the slave trade. According to legend, the famous Ukrainian Roxolana who was stolen by the Tatars was sold here, Roxolana, later became the legal wife of Suleiman the Magnificent and her children formed a long dynasty of rulers during the Ottoman Empire, she has remained in history as one of the most influential women of the Middle Ages. In 1817 in the same area of this park an extraordinarily beautiful temple The Alexander Nevsky Cathedral was built but nothing remains today after it was destroyed in 1933 by the communists. Now the park is decorated with cute woodden sculptures made by local craftsmen from old trees which were never uprooted.

From the Morsad area, a very old Italian street exists where there is a

historical building of the old Azov-Don Bank and today still performs its original purpose, as the Bank. Sculptures of Greek titans like that of Atlas, stand on each side of the door supporting balconies above, these have been newly restored since the originals were never preserved.

The Tower of St. Constantine in the city center is another surviving monument of the medieval Genoese fortress used in the defense system of Kaffa.

That’s it about old Theodosia. Next time in Part two I will talk about another totally different Theodosia of the past 100 years.