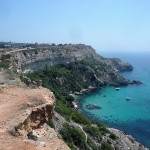 The Crimean Peninsula with the shallow Azov Sea on its northeastern side invades the northern Black sea. It is connected to the mainland by the Perekop isthmus which separates the Black and Azov Seas, being only 8km at it’s narrowest part, it is sometimes called the Island of Crimea. The name “Perekop” in Turkic is “qirim”, meaning “the pit.” Hence, quite possibly why the peninsula is named Crimea.

Crimea has been known by many names over the centuries including Cimmeria, Tauris and 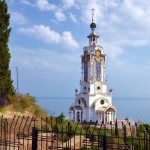 Taurica. According to written sources from the Assyrians, 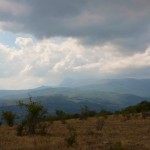 Cimmerians are the most ancient people known to have lived on Cimmeria in the VIII century BC. Later, the Taurica was inhabited by tribes of the Tauri, followed by the Scythians, Goths, Huns, Sarmatians, Bulgars, Greeks, Khazars, Kipchaks, Italians, Greeks, Turks, Tatars, Armenians and Slavs. In 1783, after Crimea became part of the Russian Empire, it became part of the lands of Taurica. 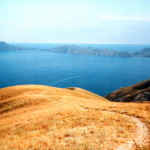 Crimea has always had a diverse ethnic composition, not only in the 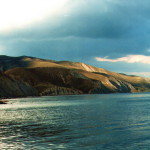 past but also at the present time. The influences of different cultures from the Greeks, Romans, Byzantines, Muslims and Slaves have helped to develop the Crimean population of today. On this small peninsula with three climatic zones, landscapes from all over the world, such as plains, prairies, forests, mountains and a lot of rare endemic plants and animals can be found. The highest point of the Crimean Mountains is the Roman-Kosh standing at 1,545 m high. The Crimean mountains are unusual because they resemble an amphitheatre, levelled surfaces of different sizes and heights above sea level. These mountainous terrains are called yayla. 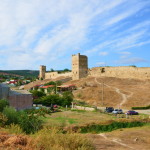 It boasts Europe’s longest interurban trolleybus, from Simferopol to Yalta; the route runs a distance of about 95 km.
The most desalinated and shallow sea in the world is the Azov Sea 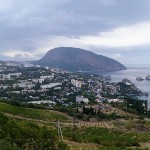 with maximum depth of 15 meters.
The oldest city in Crimea is Feodosiya, both have retained their ancient names.

Legend has it that the Crimea is also the place on earth where the mystical island of Atlantis once existed, although, this cannot be proven. 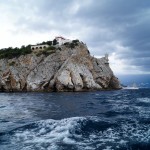 Why the peninsula of Crimea is sometimes called the island of love? The science of Astro-geography examines the influence of the 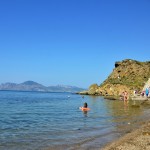 planets on earth and signs of the zodiac can be found in many regions of the Earth. All zodiac signs are represented in medical science as influencing parts of the human body. Similarly, all the organs of the human body are represented as parts of the earth. As an example, we call the Amazon forest ” The lungs of the Earth” and they are under the influence of the astrological sign of Gemini. The Black Sea is under the sign of Aries. Also, the coastline contours of the Black sea resemble the outlines of the female genital organs, hence, astrologers named Crimea Foetus, may be that’s why Crimea is named the island of love.

It is impossible not to fall in love with Crimea. I often go back to Crimea for my summer holidays. I am always drawn to this extraordinary peninsula, a place that fills you with energy from the air and sun.

This time I would like to share my latest experiences after visiting the Crimea since it became part of Russia once again in 2014. 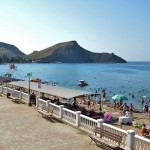 Russian phobia in the world was high at the time, many lies were told in the press about the situation in Crimea, especially after the Ukrainian events when the Crimean people decided in a referendum to become part of Russia. When I talked with ordinary people, it was clear that they were happy to be part of Russia. Naturally some people may be dissatisfied but I never met any. 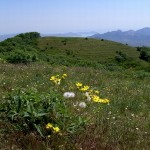 safe. You are never in any danger. The people are very welcoming and friendly. The store shelves are full of goods and provisions. Many restaurants and cafes have varied menus and affordable prices. The service may not yet be as great as in Europe, but eventually Crimea will become a first class destination for world tourism with great service.

Along all the seaside resorts, there exists a party atmosphere, with thousands of entertainments along the promenades as well as bars, restaurants and discos and the beaches are usually full of tourists from all walks of life with a huge variety of watersports for all ages.

No matter which town you decide stay in, you will be able to easily access all parts of the peninsula by public transport or with an organized coach tour. A month may not be long enough to enjoy all the beauty of the countryside and visits to the wonderful nature reserves as well as all the historic towns. I am in no doubt that you will want to visit Crimea again and again!

I strongly recommend a visit to this wonderful land rich in culture and history.