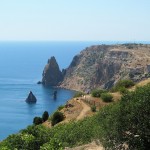 There are many sacred and mysterious places in Crimea. The Tauris are the earliest tribes that inhabited this peninsula and written about 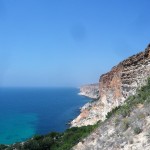 by Herodotus. They had their sanctuaries with altars built on very high cliffs from which it was possible to throw their victims. It is assumed that the Tauris had them high up, so that smoke from them could be seen for other tribesmen and warn them of any danger. 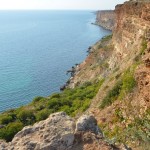 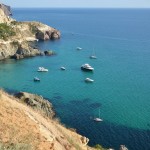 goddess Virgo. Some altars were also in Kara-Dag and Novy Svet and as a rule, in the most beautiful places, perhaps because nature beauty is such that most people believe there must be a creator. That is why tribes all over the world from time immemorial created their own gods. 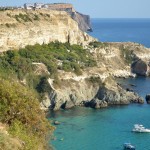 Cape Fiolent known as the ‘God’s country’ is derived from the ancient Greeks, who founded their colonies on the shores of the 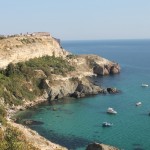 Crimea after the Tauris. They believed that in this place there was a temple of the goddess Artemis. Where else, if not on the Fiolent should there be a holy place? Today, on the top of the cliffs way above the sea, there is an Orthodox Monastery known as St. George, restored on the site of an older one destroyed by an earthquake in 1927. The history of this place is full of legends about deities, prophets and saints. 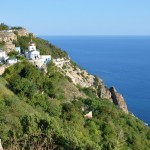 The area around the Parthenon mountain (the so-called Fiolent in ancient times) was the territory of the Tauric Chersonesos. When the Holy Apostle Andrew first time visited Tavrida in the 1st century to preach his sermons, he placed secret altars in mountains and forests, 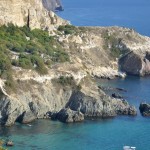 in order to protect them from being destroyed by Gentiles. Hence, why the first Christians lived far beyond the city in cave temples arranged along the coast. At Fiolent in 310 AD St. Basil, also expelled by pagans from Chersonese settled in a cave temple. Later, 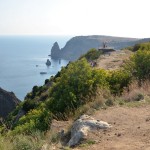 these places were converted into churches. In the 9th century the Chersonesos became the center of Christianity in Tavrida. Icon-worshipers from the Byzantine monasteries came to the cave temples at Fiolent, when their persecution began in their homeland.

According to legend, a Greek ship was heading for the temple of Artemis when at Cape Fiolent the Greek sailors were caught in a violent storm. When the 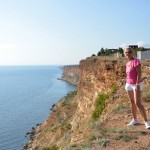 sailors began to pray to St. George for their salvation, the Saint appeared standing on a rock about a hundred meters off the coast in all his radiance and the storm suddenly subsided. The sailors immediately clambered over the rock and found an icon of St. George. Nearby, on the site of an existing cave temple above the sea, they founded the monastery of St. George the Victorious. The year 891 is unofficially considered the year of the temple’s foundation.

Germanic barbarian tribes of the Goths destroyed the Bosporus kingdom and the Scythian-Sarmatian state. They left the temple in Cape Fiolent in ruins. It was eventually rebuilt but in the 16th and 17th centuries, the monastery decayed with the decline of the Christian faith Crimea. As a result of the rise of Islam, Christians began to adopt the Tatars way of life. Nevertheless, during the Crimean Khanate, St George was one of the few functioning Christian monasteries. 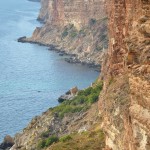 Between 1810 and 1816 thanks to the efforts and donations of Prince A.N. Golitsyn a new temple was built in the classic Orthodox style. This monastery has been visited by many famous people and emperors. Emperor Alexander the first of Russia visited the monastery in 1818, and after his second visit in 1825, he died on the way from Balaklava to Taganrog. No definite information is available about the death of the Tsar, therefore strange facts have been derived from his biography, such as his adherence to mysticism, giving rise to rumors that he converted to a monk at the monastery.

During the Crimean War (1853-1856) the monastery was almost two years under the occupation of the Anglo-French army, although the monks were allowed to continue their services, they were forbidden to go beyond the walls of the monastery. In this place a hospital for the enemy was set up, also Florence Nightingale, the first sister of mercy, lived in one of the hotels. 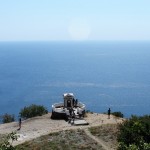 Alexander Pushkin also visited St. George Monastery in 1820 and he mentioned Fiolent in his poem “To Chedaev from the sea coast of Tavrida”. In memory of Pushkin’s visit to Fiolent and the monastery, a large circular balcony with a monument of the poet was installed on the top of the cliff overlooking the sea.