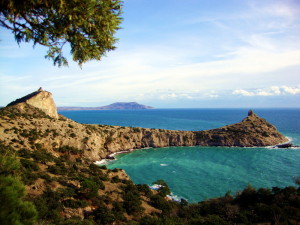 The “Champagne” history of Novyi Svet in Crimea is more then one hundred years old. A Russian aristocrat named Lev Golitsyn in the 19th century turned an unknown small village in the mountains to a prominent player in the Russian sparkling wine industry. You can visit the winery to view the champagne processes and taste some of their finest wines. Novyi Svet attracts loads of tourists because of its subtropical climate which is very similar to the Mediterranean. There is also a 400 acres nature reserve with very unique plants such as curved leaf pine trees, pistachio, dogwood, hornbeam, blackthorn, 300 year old oaks and 500 year old juniper trees. You can walk up from the town to a the nature reserve through a forest of juniper trees, around the hill of Koba-Kaya (cave mountain) to the north or come into it after the completion of your trip around the bays when returning to the town. 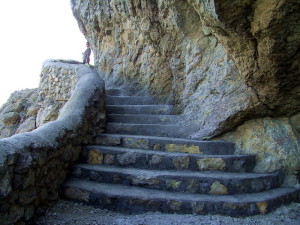 The Golitsyn Trail cut into the rock above the sea, leads from Zelenaya (green) Bay along coves and grottos skirting Koba-Kaya (cave mountain) from the east and south.

In the Chaliapin Grotto ( mentioned in part one) there was 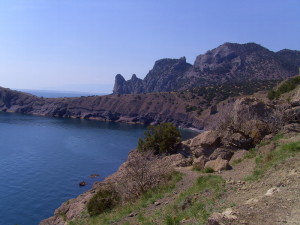 once a Christian temple in the Middle ages and later recesses were carved out in the rock by Prince Golitsyn for the storage of his wines. From here the trail takes you along the coast, which has amazing breathtaking views at every turn, worthy of the best artistic landscape paintings and photographs. During sunny weather, each one of these bays reflects its own particular color. 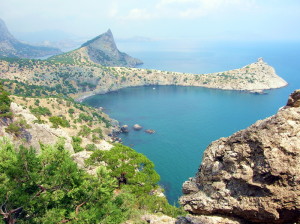 The Sinyaya (blue) bay is our next destination, which is also called the Razboinichya (“pirates”) bay. According to legend, these shores were rife with pirates in the old days and they hid their treasures in the Skvoznoi (through) Grotto at the base of Kapchik Cape, which juts out to sea and divides the coast in two, the Sinyaya (blue) bay and the Delilimanskaya (light blue) bay. This area is also a favourite for filmmakers as they are often seen here filming movies about pirates.

Skvoznoi the (through) Grotto is a unique natural cave with a length of some 77 meters and a height of about 20 meters which was neither formed by the sea or underground waters but by the movement of rock blocks along the Kapchik Cape fault. This grotto can only be accessed from the Golubaya (blue) bay, as the other side of the passage is not easily accessible. But this grotto is now closed due a few recent accidents. According to history Prince Golitsyn celebrated the 25th anniversary of his wine debut in this grotto. 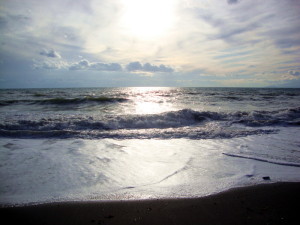 beach. The Emperor Tsar Nicholas II visited Novyi Svet in 1912, when the wine factory was granted to him by Prince Golytsin. This particular trail along the mountain which Nicholas II used to go down and swim on the shingle beach is named the Tsarskaya Trail. 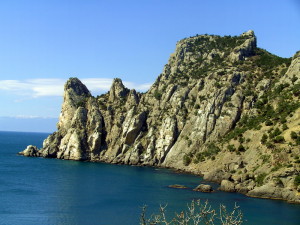 From the Kapchik Cape the Golitsyn trail leads directly to the juniper forest which encircles the Koba Kaya Mount from the north side. But you can continue your spectacular nature hike for a few more hours and go past another landmark, the Karaulnaya Mountain once used as a look out post which is situated west of the Golubaya Bay. 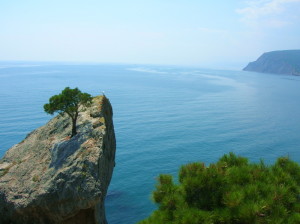 Golitsyn bench overlooking the lagoon and the cliffs of Novyi Svet. Going down the pass along steps created by tree roots you will reach the Valley of Hell. Not sure why it was named so but there are cleft in the rocks where cold icy air flows. Maybe the ancient Tauri people who used to inhabit this area knew more about this. The earliest known history of Crimea is from the IX BC when Herodotus described the ancient “wild” tribes inhabiting Crimea the Tauri who had established their temples in these canyons. There are prehistoric ivy-covered stairs cut in the rocks at a place called the “Adamovo loge” (“Adam’s bed”). If you continue along this trail you will eventually reach the next village named Veseloe. 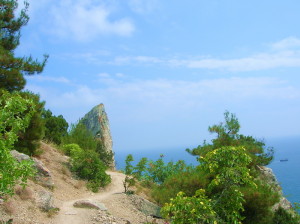 beach and a few cafes. Here you can swim, relax and have a snack. You can also climb up the hill to the ruins of the ancient Kutlakskaya fortress facing Kutlaksky bay witch dates back to the 1st century BC during the time of the Bosporus kingdom. You can go back on to your original trail from this fortress by climbing up the mountain to reach Paradise Valley, then through the juniper forest back you will reach Noviy Svet. It is necessary to note that you need to know all the best viewing points along the route as you may miss some of the most beautiful places without a guide or a map.

mountains takes you down to the sea by where you can visit the three monk’s rock sticking out of the sea, from which you can dive into the amazingly clear water where in calm weather you can actually see the sandy bottom. There are many rocks around this area with fantastic shapes, each with individual names. One particular rock called The Frog Princess cannot be missed because of its unmistakable “crown”. 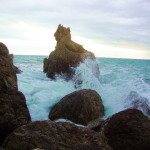 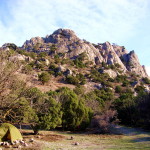 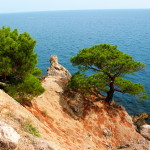 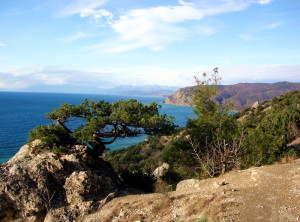 There is a legend that the real Paradise, of Adam and Eve 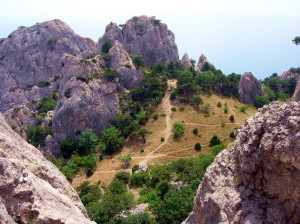 actually existed in Crimea. I do believe that some legends and names were not accidentally created but bear some facts based on truth. Paradise Valley close to the northern mountain named Golova loshadi (Horse’s head), is always very quiet during the summer the complete silence is only broken with beautiful birdsong and the sound of crickets, this is when you get a feeling that maybe this was really Paradise once and why the village (now town  Novyi svet ) was called Paradise and still remains paradise to me.

Some photos made by Artem Galinskiy, traveller, and Mariya Kuvshynkina, Crimean guide