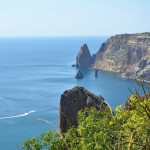 Jasper beach is situated at the foot of Cape Fiolent. From the St. George Monastery down to the beach where stone steps were 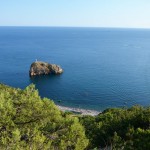 constructed during the rule of the Greek chief monk named Tanaldo (1824-1854). According to records, there were originally 891 steps, their number coinciding with the year of the monastery’s foundation. I tried to find out how many of them are left now by counting them on the way to the beach but I lost count halfway down.

They are believed to be the highest steps in Crimea leading down to the sea. The descent takes 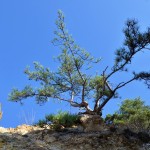 15 minutes, after which your knees vibrate for a further 15 minutes. If one descends slowly, one can hear crickets singing in the scorching 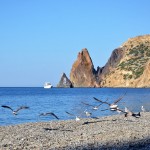 sun amongst the pistachio trees clinging to the rocks by their vigorous long roots, at the same time as inhaling the aroma of Crimean pine and juniper, whilst looking at the changing landscape with the romantic outline of the mountains.

The rock of the Holy Apparition of Saint George, is visible on the trail, from all points on the 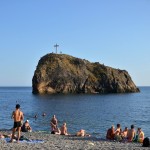 summit. In 1991, the sailors of the Russian Black Sea Fleet installed a metal cross on it, where there was previously a white marble one, which was destroyed after the revolution in 1920. The marble cross was installed in 1891 by Nichandra the rector of St George’s monastery and the steps were carved to make it easy to climb up to it. It is assumed that the hermit monk Kallinik was buried on this rock when the Greeks left St. George’s monastery, he looked after the monastery after Crimea joined Russia, he was 118 years old. 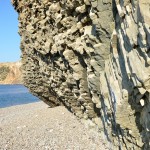 Fiolent was formed from the eruption of an ancient volcano about 160 million years ago. Rocks and mountains were formed from frozen lava and layers of colored tuffs. The volcanic rocks washed by 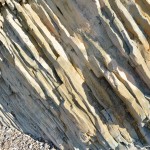 the sea lined the shore with minerals, orange carnelian, gray-blue chalcedony and white agate. The beach was called Jasper because it was by the eruption of underwater volcanoes of the Fiolent, jaspers of blue, lilac, red, green, tender pink and white were formed. Polished striped patterns on the jaspers are so fascinating, they can be viewed endlessly.

Jasper beach with crystal clear water is one of the cleanest beaches in Crimea. Despite its 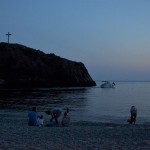 remoteness water sports are conducted there, such as kayaking and 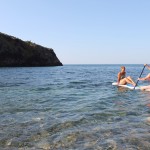 skate-boarding. One should spend the night on the shore by moonlight to the sound of the sea, surrounded by rocks that look like ghostly images during the night. From this beach you can reach Balaklava by boat but in the morning, we endured the difficult climb back up the stairs to the monastery. 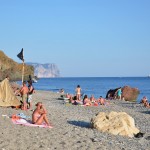 From the Holy Monastery of St. George, we followed the Baydar valley, passing Balaklava on the way. Another ancient part along this road with a very interesting history. Balaklava bay is one of the most desirable bays on the Black Sea as the bends in the landscape hide the harbor from the sea. It is assumed that this bay is mentioned in Homer’s Odyssey poem as Laestrygonians, where the giant cannibals attacked the ships of Odysseus. This is the first mention of Crimea as the Harbor of Laestrygonians. The ancient Greeks considered the bay mysterious and it was an impotant part of their colony in Crimea. 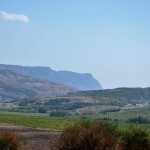 The Russian fleet was stationed In Balaklava Bay long before the foundation of Sevastopol. A battalion of Greeks who took part on the Russian side during the Crimean war were placed there to protect the southern coast. During the visits of Russian emperors to the peninsula, the Greek battalion was charged with guard duty. An Amazon company of 100 Balaklava Greek women was formed by Prince Gregory Potemkin in 1787 to meet Empress Catherine the Great in Crimea.

During the Crimean War, Balaklava was occupied by the British army. In the English records, a special mention is written about the Balaklava battle of October in 1854. Due the unjustifiably large number of victims, the battle ground was named the Valley of Death by the British. In 1856, a monument was erected in the valley, to the dead British soldiers and was visited by Sir 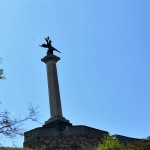 Winston Churchill during the Yalta Conference in 1945.

Balaklava is also the name of the headdress that Lord Raglan, who led the British army during the Crimean War, invented for his warriors. With his inventions in clothing, the Lord left a more significant mark in history than his fighting feats in Balaklava. The raglan sleeve is also named after him, he came up with this shape to hide the hand that he lost in the Battle of Waterloo.

Leaving Balaklava, we departed from the Western Crimean coast and headed for the delightful views on the Southern coast of the Crimean Peninsula…