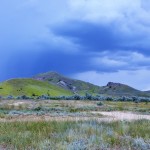 When contemplating the beauty of nature, the human soul is reborn. A feeling of elation fills one’s heart with lots of memories, never to be forgotten. If you ever get the chance to have a walk along at least one the trails of Karadag, the desire to return there will be irresistible.
Each new mound and hill, opens up unexpected fabulous views but the strangest thing, is this feeling of having stayed into another world. On Kara-Dag a sense of the mystical and the unexpected seems to appear for a moment but when you try to unravel these mysteries of the volcanic mountains formed 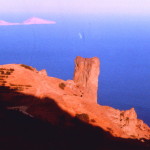 millions of years ago, there is a good chance you will also become a mystic in this life.

The mountain group called Karadag forms the edge of the mountainous and the steppe part of Crimea, this ridge to the south-west of Crimean mountains extends all the way to Sebastopol. The Karadag mountain consist of a group of several ancient extinct volcanoes in Cimmeria near the village of Koktebel, presumably dating back to about 160 million years. These mountains are made up of a variety of volcanic rocks and tuffs, formerly lava flows. 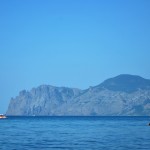 Scientific studies of the volcanos have been under way for many years. Many legends tell of hidden valleys and peaks, all trying to solve the mysteries of this mountain. The poet and artist Maximilian Voloshin on the Cimmerian land of South-Eastern Crimea wrote almost a hundred years ago. “This land has something to remember and her lips are sealed over a century of silence”. This mystical figure of our time, spent the last few years of his life in Koktebel. 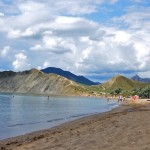 rock”) of a profile of Voloshin. The world is not aware of another similar case, when nature displayed on a rock the outline of an artist who worked in this area. Lush hair, a straight upturned nose and a massive beard of clay layers to the hill known as Cape Malchin.

According to testimonies of local residents, there was an earlier profile of Alexander Pushkin on this place but in 1912, the rock collapsed and formed the present profile of Voloshin. Over the years, the profile loomed clearer and clearer and after the Crimean earthquakes in 1927 outlines of Voloshin have become more recognizable.

In 1979, Kara Dag was declared a Nature Reserve. To walk along its 50 km trails, you will require to be accompanied by a guide or go with an organized tour. 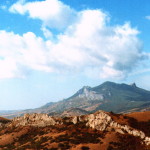 According to legend, the name Kara-Dag originated when this place was an ancient sanctuary, where people were taught the commandments of heavenly teachings. Such places on earth are located by sacral geography. In these nature reserves people cannot hunt, build a home or fight. The ancient Tauri people who descended from Indo-Aryans, inhabited Crimea in the 6th century BC, named these mountains Calitri. They believed, the top of the mountain was the sanctuary of the goddess Kali , who was the symbol for destroying the old and building the new world. Kali is translated from the Indo-Aryan and means Black.

There are many names derived from the word “black”, this also is another mystery. The Black 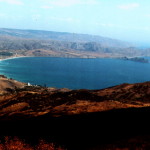 Sea, the black goddess, the black mountain… The Venetian port city in the 14th century on the site of Koktebel bay was called Kaliera. Eventually Kaliera was renamed Kara-Dag, as the lands were conquered by Turkic-speaking tribes.

The highest point of the Karadag Mountains is 577 meters above sea level on Mount Svyataya, meaning holy and stands to the right of mount Kok-Kaya. The cone of this mount was the crater of a volcano, the very solid rock on the mountain slopes was formed as a result of sintering lava and ash. Holy Mountain was once called the Kara-Dag and in the ancient sources translates as “Black Forest”. According to legend, a Saint was buried on the Holy Mountain and his tomb was visited from different places by the sick with the hopes of being healed. 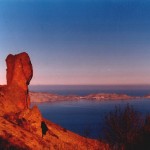 Near the Holy mountain there is a mount named Syuryu-Kaya, meaning “sharp rock” which resembles a sleeping tiger. The whole mountain range is made up of peaks and rocks spouting bizarre shapes and all with appropriate names. From the Holy Mountain a Magnetic mountain rises, where the compass needle often deviates in the wrong direction. A 42-meter high rock called the Devil’s finger (or Karadag Sphinx). This Magnetic ridge is visible from many points of Koktebel bay. They say that If you lean on the Sphinx and make a wish, your wish will come true. Why the devil’s finger nobody knows.

There are numerous bays around these mountains, some of them are named because of the 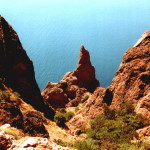 predominance of certain minerals. The name Bay Frog comes from the small frog like stones, which have a matt surface with bubbles caused by the minerals. In the same bay there is a rock that looks like a frog. It is home to the black crested cormorant, a very rare bird, listed in the International Red Book. Gravel Bay is dotted with volcanic pebbles. In the Pozzolan bay the pozzolana dominates, this mineral is found only in the Kara-Dag and on the Vesuvius volcano.