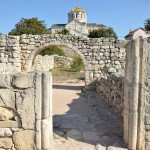 The Heraklion peninsula was inhabited by barbarian tribes named Tauri, who made predatory attacks from Balaklava bay on the ships of travelers. The ancient Greeks in 424/421 BC founded the Tauric Chersonese on the peninsula, which eventually became a large Black Sea state with a slave-owning democratic system. Chersonese was the second largest state in the Crimea after the Bosporus kingdom. In the 2nd century BC during the war with the Scythians, Chersonese became dependent on the Bosporus state, as it was unable to independently repel the Scythian raids. In the 1st century BC. Chersonesos lost its democratic form of government and became dependent on Rome, in the 5th century AD it became part of the Byzantine Empire. 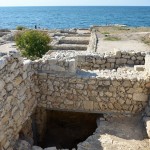 The city was destroyed and rebuilt many times. In the 4th – 5th 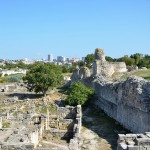 These ruins were rediscovered after excavations by archaeologists at different times. Here you can wander through ancient streets, among the remnants of residential quarters paved with stone and touch the walls that form part of a diverse history. 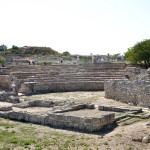 The ancient amphitheater, the only one preserved in the territory of the CIS, was built around the 4th century BC, during the time of the Roman 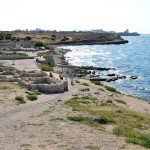 invasion it was used for gladiatorial fights. The spread of Christianity began the decline of these ancient arenas, the amphitheater in Chersonesos eventually collapsed and later a Christian temple, excavated by archaeologists, was built on the site.

In 1935 the basilica, a medieval Christian temple, built in the 6th century on the site of a synagogue of the 4th century, was unearthed. For many centuries there were destructions and developments, one cultural layer replacing another, it is difficult to imagine how many generations and civilizations left their history on the Chersonesos stones. 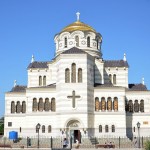 In our time, Chersonese is a Christian shrine. In the 1st century the 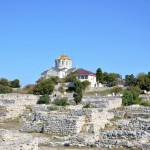 first followers of Christianity appeared and the holy Apostle Andrew the First-Called visited Chersonesus with his sermons. In the 4th century, in the central square, seven temples were built on top of the old antiquities, where altars and statues of the gods were located.

In the annals of Ancient Russ, Chersonesos is mentioned under the name Korsun, the so-called ancient Rusich. In 988 the city was conquered by the army of the prince of Kiev Vladimir Svyatoslavovich, where he was baptized and converted into Christianity. After the excavations 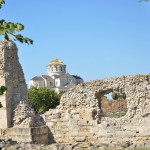 in 1827, a square was uncovered on the site of the temple, where this took place, which became an important part of Russian history and in 1861, in the presence of Emperor Alexander II, a neo-Byzantine cathedral was built there in honor of Prince Vladimir. During the Second World War, the temple was twice destroyed but by 2004, the Orthodox Cathedral of St. Vladimir’s was rebuilt. 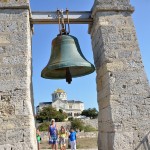 Chersonesos. The bell was cast in 1778 in Taganrog from Turkish 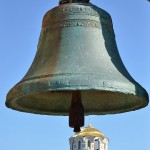 trophy cannons, it depicts St. Nicholas and St. Phocas the patron saints of sailors. In 1803, by order of Alexander I, the bell was brought to Sevastopol for the church of St. Nicholas which was under construction. During the Crimean War, when the 349-day defense of Sevastopol was over, the British and French entered the city during the occupation and removed many valuable relics, including 13 bells from Sevastopol churches later taken to France. Before World War I, France, in order to enlist the support of an alliance with Russia, returned one of the bells, which was discovered in the Notre Dame Cathedral. According to documents, it was the same bell which was taken from Chersonesus. The bell was raised once again on the belfry of the Chersonesus Monastery, in 1925 it was installed back to its original place on the shore and survived the second defense of Sevastopol in 1941.

This was my first visit to Tauric Chersonese. I think that this is the most interesting preserved monument of ancient Crimea. Moreover, it is also important as a Christian shrine …
“Not for the wordy agitation,
Not for the gold or bloody ways,
We have been born for inspiration,
For charming sounds and for prayers.”