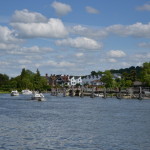 Traveling through the River Thames valley, you should stop at the charming town of Marlow. In Old English, the town’s name means, “Land after the draining of a pond”. In 1085 the estate was mentioned in the Doomsday Book, when the Earl of Mercia owned it and then was given by William the Conqueror to his Queen Matilda. A town market in 1227, contributed to the further development of Marlow.

This place is glorified in Jerome K. Jerome ‘s

novel “Three Men in a Boat”, where the author writes with love about this wonderful town. Marlow is one of the pleasantest river centers I know of. It is a bustling, lively little town; not very picturesque on the whole, it is true, but there are many quaint nooks and corners to be found in it, nevertheless – standing arches in the shattered bridge of 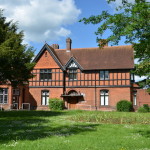 Time, over which our fancy travels back to the days when Marlow Manor was owned by the Saxon Algar”… 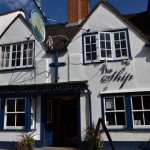 The charm and antiquity of this town can still be felt today. There are many Georgian houses of the 15th and 18th century in most streets. On West Street you will find an old Pub called “The Ship”, nearby is Lady Astor’s house, the first woman to enter British Parliament, who lived there for some time before settling in Cliveden, there is also a little Stone House called the “White house” which was once an Inn. 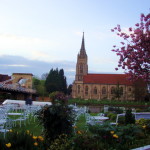 All Saints Church on the shore of the river Thames near Marlow Bridge was erected in 1835 on the site of an earlier church and the spire contains eight bells.

If you walk down the long avenue leading from the High Street past the “George and Dragon” pub, you will reach St. Peter’s street and a famous old pub called «The two brewers» (now 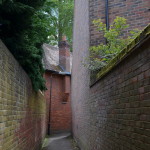 under restoration), where Jerome K. Jerome stayed whilst writing his novel. There are some houses in the area from the 14th century, which are considered the best houses of that period in Buckinghamshire. 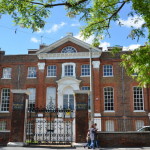 Marlow Place at the beginning of the street was built in 1721; it was part of the Royal Military College until 1812 and is now being used as a company office.

St. Peter Street, leading down to the river, used to be called “Duck Lane” due to the historical ducking chair that was once set on the banks of the river during the Middle Ages and served to punish the disgraced and criminals. The victims were tied to the chair and submerged in water using a special mechanism, similar to a swing. There is evidence that the same chair was used for ducking witches. 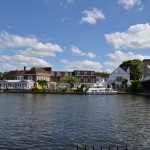 From this bank of the river you will enjoy a beautiful view of Marlow lock and the «The Compleat Angler» hotel, built in 1658. The hotel was originally called «The Waterside Inn» but was renamed after the famous English writer Isaac Walton (1593 – 1683) stayed here and wrote a book called “The Compleat Angler”. This hotel is also famous because two ex presidents of the USA, Ford and Carter stayed there recently.

The suspension bridge is another postcard of Marlow, it was built in 1832 and was used as the project for the bridge over the river Danube in Budapest. It is also legend that the first bridge across the river Thames was built in Marlow by the Knights Templar in 1309. 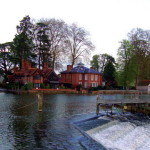 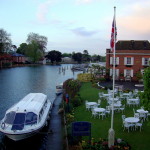 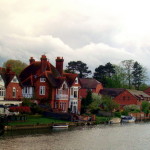 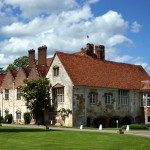 On the other side of the river you will find the small village of Bisham, 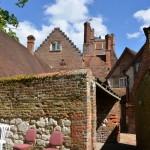 which was historically closely linked to the knights Templar, who built a large manor house there in 1260. Bisham Abbey was founded much later and King Edward II used the building as an aristocratic prison. Queen Elizabeth de Burgh was the most famous prisoner in 1308. Since 1337 the Salisbury family owned the house when the estate was passed on to King Henry VIII, who granted it to his ex-wife Anne of Cleves after their divorce.

Subsequently, the Hoby family purchased the estate. There is a portrait of Elizabeth Hoby hanging in the great hall and it is said that her ghost often wanders around the room. Apparently the Countess cannot find peace because of guilt associated with killing her son through punishment and neglect. Today the building is used for festive ceremonies and also, the National Sports Center has been built on the land of the estate.

Overlooking the river Thames in Bisham, in a very beautiful spot there is an old church of which Jerome K. Jerome wrote, “If any tombs are worth inspecting, they are the tombs and monuments in Bisham Church”. 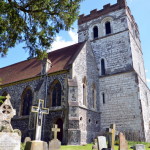 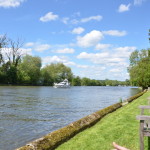 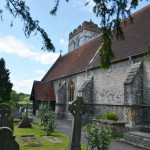 Forgetting about the historical facts of this town, the most traditional events in Marlow today are the spring fete with duck races on the Thames and the Regatta in June, which was first held in 1855. Festooned with decorations and lots of marquis by the river, where a statue of its most famous Olympic canoeist Steve Redgrave has been erected, the town comes alive with the many tourists and fans, which come here in droves dressed in their best attire to celebrate these events and transform it into a happy and festive holiday place.