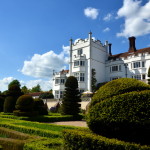 This snow-white hotel in the style of an Italian Renaissance Palace, surrounded by greenery and a topiary garden, is one of the postcards on the river Thames. Danesfield House is located on an ancient settlement, where artifacts from the Neolithic, Bronze and Iron Ages were found. The name can be translated into the Danish field. 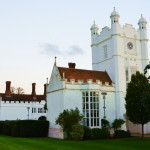 In 1664 the estate was acquired by Edmund Medlycott, later the 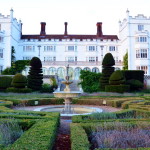 house was reconstructed by another owner into a classical Gregorian style; the modern house in the Italian style exists from 1901. In 1991 the manor house was turned into a smart country hotel.

Not far from Danesfield House along the river Thames there are ruins of Medmenham Abbey, which was founded by the Cistercian monks in 1145. It is known from historical records that monks were ascetics as they slept on straw, wore rough tunics and 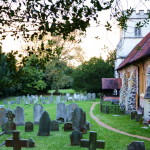 cowls, ate no fish or eggs, spent the day in prayer and during all of their lives they had a rule of silence, for no one ever spoke. In 1547 when monasteries were disloved by Henry VIII, the abbey was closed.

200 years later in 1755 sir Francis Dashwood acquired the Abbey ruins and built the house. It became his second residence after a manor he owned in West Wycombe. He opened his famous Hellfire club and organized secret meetings of knights also named “The brotherhood of Medmenham”. A desire to express their interests in architecture, literature and religion was the purpose and creation of this secret society. Francis Dashwood only allowed membership of this society to his cleverest of friends who also had a great sense of humor. The choice of this abbey forced his 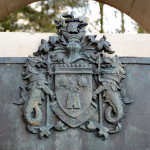 contruction and most likely was not casual. In those times sir Dashwood reconstructed the Abbey in a neo-gothic style, decorated the caves with sexual symbols, collected the biggest library of pornography in England and decorated the park with sculptures in pornographic poses. The abbey was hidden in a grove of trees that provided full privacy to a visitor coming by boat for some unusual entertainment.

In a counterbalance to the asceticism of the hermits in the 12th, Sir Dashwood promoted freedom in everything. Besides, “knights” derided religious traditions and customs. Once during service in Saint Peter’s Church in Medmenham the 4th Earl of Sandwich, a member of the club, released a small monkey, believers were shocked and ran in horror from the building sure that Satan himself had materialized. 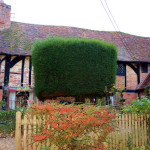 The building of the church of Saint Peter remained open until 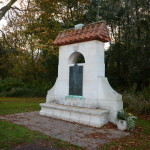 recently. But the Abbey is a private residence and is not open to the public. The village Medmenham is an absolutely quiet rural corner on the river Thames with footpaths along both sides. There is a monument on the river bank in honor of lord Devonport who protected this site for public use. You can immerse yourself into the atmosphere of old England among a set of typical English cottages which abound in this area. 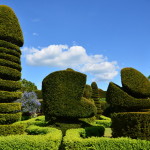 Some traditions of the Hellfire club were realized in Danesfield House, when this beautiful place after World War II was requisitioned by the Air Ministry. Officers created a club similar to Dashwood’s club. Once clubmen arranged a great party in the great hall which was so strange that they left traces from boots on the ceiling. Such unusual way of entertainment did not differ a lot from the events of “the Medmenham monks” of sir Dashwood, whose motto was “do as you please”.

Danesfield House hotel is very busy and popular place today. We visited this unusual hotel, had nice afternoon tea and enjoyed walking around the terraces with Clematis, Wisteria, Choisya and Chimonanthus in the park with a fantastic view of the Thames. And pleased ourselves very much.