When we arrived in the small village of Castle Combe in Wiltshire, it felt like a time machine had transferred us to the middle ages. There are no modern buildings to be seen anywhere or any modern architecture. That is why the village is in a list of the prettiest villages in England. The cottages were built in the 14th century from a Cotswold yellow stone mined in this area and have been preserved for future generations to visit and admire. There are only 350 inhabitants, one small gift shop for tourists, two old pubs and a large 14th century Manor house in the valley, whose history is linked with several English family dynasties. 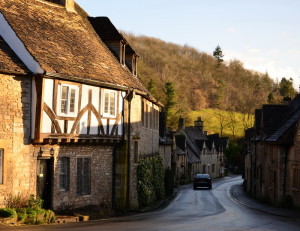 The classic history of the English village of Castle Combe has

been known since ancient Celtic settlements. After the conquest of Britain by the Romans a fortress was built in the valley. In the year 600 AD the Normans settled here and built a new fortress. Similar stories can be told about hundreds of other settlements in Britain. The name Castle Combe means “castle in the valley” from the Saxon language (“cumbe” meaning valley). The Castle was destroyed by invaders from Denmark in 878. The land with some ruins of the Norman castle is now owned by a golf club.

In the Middle Ages the settlement Castle Combe was an

important center of wool industry. From the central square with the Market Cross and water pump established in those days, streets lead down to the river Brook along the picturesque cottages where the spinsters and weavers once lived. The Church of St. Andrew from the 14th century is famous for the fact that the oldest medieval working clock in England can still be found here. 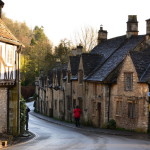 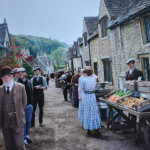 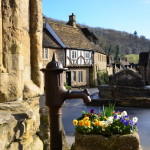 This attractive village is often used by filmmakers as there

are no TV aerials or telegraph poles in the area; several well-known British films such as “War Horse”, “Doctor Doolittle” and “Wolf Man” among others were filmed here.

While the Barony of Combe existed for 850 years, the dynastic family “Scrope” of Norman origins owned the estate for nearly 500 years. George Thompson married Emma Scrope, the daughter of painter the William Scrope and heiress to the estate of Castle Combe who then took her last name. Now as George Scrope he is best known as the author of a book about the Castle Combe estate, as well as being an outstanding geologist, he has issued articles describing the activities of volcanoes. Subsequently, he sold the estate as he was the sole heir.

The Manor house which was built in the 14th century to

replace the Norman Castle is now a five-star hotel called the “Manor House Hotel“. In small cozy rooms with antique fireplaces and beautifully carved paneling in the hall you can enjoy great hospitality, a very friendly staff and even have afternoon tea in an atmosphere of bygone days. Also you can stroll in a magnificent park from the 18th century created in an Italian, Classical and Gothic style with fantastic views of the valley.

The surrounding area of this charming village with green woods and meadows on the hills create very enchanting scenery. It is a unique nature reserve and a beautiful wildlife sanctuary.