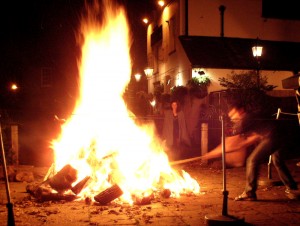 The failed plot that gave rise to a tradition of burning effigies? it happened in England…

Where could you possibly drink mulled wine next a big fire in London? Mulled wine maybe, but a big fire in London? Well! «The Black Lion» public house had a bonfire and was serving drinks all evening. I really didn’t believe it at first, until I sat next to it with a glass of wine in my hand. I spent a wonderful evening with friends and other guests in this pub on the bank of the river Thames in Hammersmith; it was a cozy forecourt with wooden tables and benches and on a chilly evening in November it was warmed by a great big fire. This only happens once a year on the 5th of November! Because of an event that is more than 400 years old.

The history behind this dates back to the 5th of November 1605 when a group of Catholics led by a man called Guy Faukes tried to blow up the houses of Parliament during the reign of King James the 1st in order to change the government of the day. Reason being that Catholics did not like the king as he was a Protestant. The team of conspirators hid in the cellars of the houses of Parliament with barrels of gunpowder. But the powder plot was discovered just in time to avert disaster. Guy Faukes and his colleagues were seized and taken away to the Tower of London and eventually executed by burning at the stake just like witches.

Since then throughout four centuries on the 5th of November, all around these islands of Great Britain, people make an effigy of the powder plot instigator Guy Faukes and burn it on a fire. The effigy that is made to resemble a man is usually made out of old clothes stuffed with straw or newspapers. This “person” is then adorned with a mask to make him look terrible but sometimes it is simply funny. On the eve of this celebration children go out on streets with this effigy and raise money to buy fireworks for this event. They stand on street corners shouting “Penny for the Guy” but of course people give much more today. Then the following day on the 5th of November parties are held mostly in house gardens and on common land with a huge bonfire where they burn the effigy and light lots of fireworks. 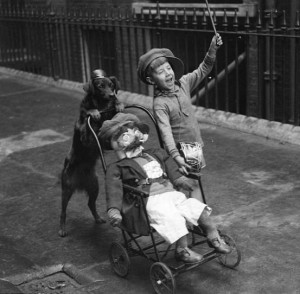 Many photos of different years are stored in the Museum of London with various Guy’s made with great imagination and ingenuity. In many small cities and villages this day is eagerly awaited as everybody can bring and burn all their old furniture and rubbish that they no longer want. Many English pubs keep this tradition alive by organizing festive gatherings in their gardens, and in most of the many parks of London, big fireworks are let off in memory of this day and masses of inhabitants with their children as well as many tourists gather to watch the big display paid for by the local councils.

This is roughly the history of this tradition... And the magnificent Houses of Parliament and the Clock tower with Big Ben are still one of the most popular tourist sights.