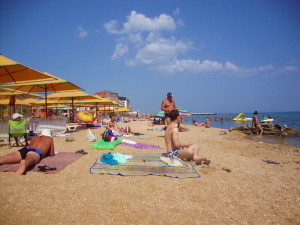 In part one, I told all about ancient Theodosia the town that was born some 25 centuries ago. Theodosia has 2265 hours of sunshine and a swimming season of 114 days. It boasts a Mediterranean climate where the average temperature throughout the year is positive and storms are occasional. There are 15 km of golden frayed shell beaches, which shimmer and sparkle in the sunlight and lots of vineyards producing some of the best sweet dessert wines made in the tradition of the ancient Greeks.

Talking about Theodosia, we have to mention the artist Ivan

Aivazovsky, one of the best marine painters in the world, who lived in this town and left his art as heritage to Theodosia. Coming from the Quarantine, the ancient part of town along the Italian street, I passed the old avenue of sycamores, where in 1890 a fountain was built to commemorate the fact the Ivan Aivazovsky brought water to the town. It boasts a bronze figure of a woman who looks like the wife of the artist holding a bowl with water pouring out of it. The story goes that Theodosia was always short of water, it is a known fact that during dry summers, barrels of water were delivered from the town of Sevastopol by steamers. Aivazovsky diverted the Subozhsky spring, (which was owned by his wife) directly into the town and built a fountain there in 1888. Grateful inhabitants erected this monument in honor of this event. The monument was destroyed during the WW2, but more recently has been recreated by local sculptors and now adorns an alley of the Jubilee Park. 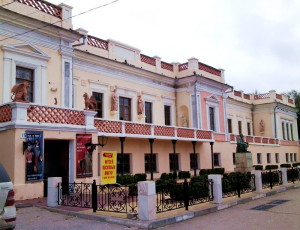 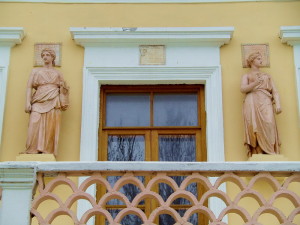 The Aivazovsky Art Gallery is located on what was once known as the Catherine embankment, which has now been renamed Aivazovsky Avenue. Winged griffins above the facade of the building have protected it from evil and bad news for more than one hundred and fifty years. A bust of this Master seascape painter looking out to sea has been erected in front of the Museum as a monument to him with the inscription “From Theodosia to Aivazovsky”. The Gallery built entirely by funds provided by the artist in 1845, was the only museum dedicated to just one artist in the whole of the Russian Empire. Ivan Aivazovsky donated 400 of his paintings to the town. When I entered the main hall of the gallery for the first time, I was impressed by the huge canvas on the wall, where nothing but waves were painted on, called “Among waves.” You have to see it! No other artist has managed to paint waves so realistically. All his other unsurpassed pictures of sea views create a mood of excitement and joy. Only true art can influence a person this way. His masterpieces are in many museums around the world. His famous “The Ninth Wave” is exhibited at The Hermitage museum in St.Petersburg.

Aivazovsky did a lot for his beloved town of Theodosia. The Museum of Antiquities on Mount Mithridates named in honor of the Bosporus King Mithridates IV was built at his own expense. Amphora’s and statues, ancient coins and marble gravestones, are all on display in this, the oldest provincial museum in the Russian Empire. It was destroyed during WW2, but has now been re-built as a modern historical Museum.

If you walk up from the seashore, pass the Art Gallery, you

will reach a square with a newly erected circular fountain and on the end of a building facing you, the image of a sail ship has been embossed very heavily all over the facade of the building, which houses the Alexander Grin Museum, the writer of romantic novels. He used to live here and “gave hope to young lovers dreams” in a beautiful novel named “Scarlet Sails”. The novel tells of a captain Grey arriving on a ship with “scarlet sails” to meet a young girl named Assoil. There is now a hotel with the same name “Alye parusa” meaning “scarlet sails” on the Aivazovsky Avenue but it has no connection to the story as neither Assoil nor the Captain ever existed. A beautiful park surrounds this modern hotel and hopefully one day it may remind people of Alexander Grin’s book. 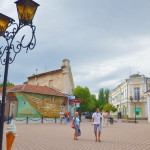 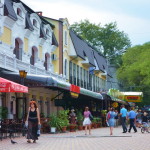 One of the main street in Theodosia 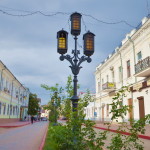 Along the promenade, which was named The Catherine embankment one hundred years ago, you can admire the magnificent wealthy 18th-century mansions that were built by the wealthy. Most visitors love taking photos of these mini palaces which are mostly designed in the Greek and Italianate style. In old postcards of years ago and some old pictorial books about Theodosia, I noticed Catherine Avenue looked absolutely stunning with luxurious and ornate houses that depicted the architectural masterpieces of that time. Unfortunately, only some of them have survived to the present day and during the holiday season, from June to August, strolling along the promenade, you will hardly be able to see the old buildings behind the rows of tall trees and souvenir stalls of the market. In September, when the town is free of tourists, it begins to live again as a quiet provincial town and a very a different atmosphere reminiscent of it’s past reigns over it again.

In 1475 Theodosia was conquered by the Ottoman Turks, who named the town Keffe, some time ago the town started to fade but a new era began when Crimea was conquered by the Russian Empire in 1771. Catherine the Great visited the town in 1787 and Emperor Alexander III had voted and offered to help make the town the main port of Crimea that is why they built a Railway in 1804, the town regained its original name, and once again become the Greek “God given” Theodosia. 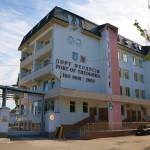 The main port of Crimea 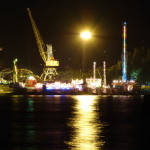 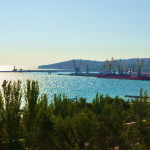 construction which changed the face of Theodosia. The town became a popular resort on the coast with the building of private beach areas for the rich, manor houses and summer residences. Dacha “Milos” was built in 1911 in the style of an ancient Greek temple with statues and busts of ancient gods, a reminder to the founders of Theodosia’s original inhabitants. A copy of the statue of Venus de Milo is installed in a round gazebo on the corner of a building which has now become a symbol of this town.

Further along the Avenue there are a few more very beautiful Mansions, built before the Soviet revolution. A very unusual lodge called “Stambouli Dacha” designed in a Moorish style with delicate domes, terraces, towers and elegant minarets was built by a Turkish tobacco manufacturer, named Joseph Stambouli as a summer residence for his beloved wife. Unfortunately, before the revolution of 1917 he had to flee back to Turkey abandoning this lovely building but it has been preserved in spite of the many wars in this area and has over time been used for various purposes. It is now a museum and cafe.

The Crimean peninsula was part of the Soviet Union and at that time had a lot of military industrial enterprises specializing in missiles and Space. The first Soviet cosmonauts were trained in Theodosia as well as many of the missiles built here took part in the Cuban missile crisis with the USA. All around the vicinity of the town there were a lot of military installations and most places were designated as exclusion zones. Hence the reason why Theodosia was not known as the famous seaside town it is today. In 1954 under the generous Ukrainian Soviet Leader Nikita Khrushchev the Crimea was given as a gift to the Ukraine. 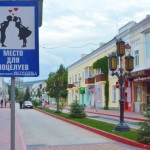 The main street in Theodosia is Zemskaya street 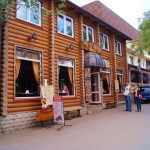 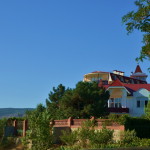 But all of these events have played a positive role in the history of Theodosia. There are a lot of pristine nature reserves and unique natural landscapes. The very clean environment and healthy air encouraged the building of many sanatoriums. Unique prevailing winds made the region a favourite for hang-gliders, Para gliders and hot air balloonists. The Theodosia State Museum of hang gliding, opened in 1990 is a unique museum and the only one in the whole of Europe; only three other similar museums exist in the world. Thanks to developments and research at the institute for space exploration, Theodosia became home to ballooning enthusiasts from all over the world.

Theodosia has many beautiful traditions. In addition to the International Wine Festival, they celebrate the birthdays of Aivazovsky and Grin. Also, each holiday season ends with a beautiful festival of ballooning followed a massive firework display over the town centre.