The Crimean resort of Koktebel near Theodosia on the Black Sea is situated next to an extinct volcano named Kara-dag, meaning “black mountain“. Translated from Crimean Tatar language Koktebel means the Land of Blue Hills. According to some scientists Kara-dag was active about 150 million years ago. Volcanic eruptions have created bizarre rock shapes that hang over the sea and create a picturesque sea view. There are many legends about Kara-dag! From a giant monster like Loch Ness, who lives somewhere in the depths of the sea under the cliffs, to Aliens who settled inside the mountain. Nothing has ever been proved but the mystery and the legends make the place sound charming as well as interesting. There are unique plants and animals in the local nature and you can see these if you walk along a specially protected footpath. This, I will go into more detail some other time.

Some time ago, on the sandy beaches of Koktebel and Kara-dag you could find a lot of Gems

like carnelians, chalcedonies and agates. These unique sandy beaches that used to attract lots of tourists, have now disappeared after the sand was removed to use with cement for building. As the landscape was violated and the sea which does not forgive such abuse a beach has never appeared since. Tons of gravel had to be brought in order to form a beach and save the resort. Today, this massive mountain is a Nature Reserve, created to conserve the extraordinary natural beauty that surrounds it but the unique beach in Koktebel with all it’s gems has been lost forever.

The village of Koktebel has long been loved by Russian

artists and writers who used to come here for a holidays. The Russian poet Maximilian Voloshin lived here for a long time in the early part of the last century and today his house is a museum. His contemporaries described him as a person of extraordinary charisma. During The Civil War in 1918, he harbored two enemies in his house, trying to reconcile the warring parties and to save his country from further bloodshed. Besides the beautiful verses that he penned, he also painted gentle watercolors of the Crimean hills that he loved so much.

The combination of the blue sea with gray- yellow steppe hills creates a unique natural topography, which is impossible not to love. To enjoy the beauty of this wonderful landscape I went with some friends for a trek around the Koktebel bay. Our journey took us to some beautiful small coves along the Black sea coast from Koktebel to another resort called Ordzhonikidze.

After walking along the Koktebel embankment we climbed up the hill along a trail from where one can see a panoramic view of the village and the mountain range beyond. From up here you can clearly see Cape Chameleon, disappearing into the sea which constantly changes its color depending on the weather and its “mood”. From here you can climb higher up the mountain named Kuchuk-Enishar, where you will find the grave of Maximilian Voloshin, who wished to remain in the Crimean hills forever. By tradition, all visitors bring a shingle pebble and place it on the headstone in memory of the poet. From this hill you can admire the typical “wild” beauty of the Crimean landscape.

With Cape Chameleon looming on our right, the road lead us into a cozy bay, which for many years was used by many tourists who loved to spend holidays there as campers as well filmmakers who found the unusual landscape ideal for shooting westerns and other romantic movies. Several years ago, the Crimean Tatars decided to lay claim to this unique land and established a tent there, where they held a sit in protest. To save the bay from unauthorized developments, the Ukrainian authorities declared this bay called Tihaya bay also known as silent bay, a nature reserve.

It is important to mention here, that Silent bay is also the birthplace of the Crimean and Russian nudist colony. Traditions have been laid a hundred years ago when poets, artists and other representatives of the arts, came to holiday in Koktebel, trying to forget the stress of urban living and relax as naturists. Traditions are still alive today and in the bay between the two towns there is still a nudist beach, which has recently been moved closer to Ordzhonikidze.

Our journey along the rocky coast took about four hours to

complete with small stops for lunch and some swimming. For those of you who would like to repeat this “walk” I would recommend a change of clothes and your most comfortable footwear. You have to enter the sea and paddle around two of the five capes you will have to circle around. The first cape we rounded through the water was quite easy and enjoyable as it also nice and sunny.

Skirting the next cape we were almost up to our waists in water and being repeatedly covered by large waves. Mind you it was a stormy afternoon and the only alternative would have been going over the mountain goat path which could have been dangerous.

Skirting the other capes, after our unwelcome sea dips, we finally reached Cape Kiik – Atlama, meaning, jump the wild goat, from up here we could also see where the town of Ordzhonikidze was located. The holiday history of this town is not so remarkable. During the Soviet era, the neighborhood of the town, in the literal sense of the word, was “stuffed” with military industry and for obvious reasons, the town was not so well known. But in the last few years it has become a very popular holiday destination for many tourists because of the smooth sandy beaches, crystal clear waters and wonderful weather. 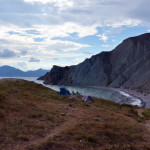 Bay next to Ordzhonikidze 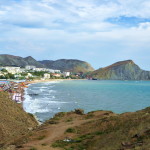 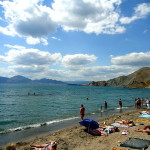 Unfortunately, in 2013 the usual Indian summer in Crimea during September did not materialize and only lasted a matter of a few days. The weather was unpredictable this time but “There is no bad weather in nature.” Have fun if you ever visit this area and enjoy a course in landscape therapy whether it will be sunny or stormy. 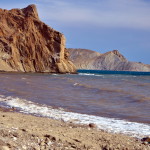 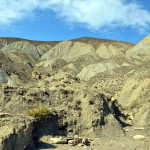 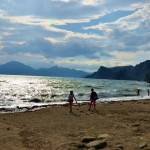