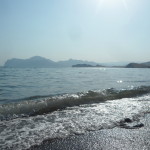 Karadag called a fossilized fairy tale of nature because of the abundance of more than 100 minerals. As a result of volcanic activity veins of quartz, calcite and other minerals were formed. In this range one can find, milky white quartz, opal, rhinestone, purple amethyst, yellow citrine, smoky bluish chalcedony, agate, a bluish emerald green apple and chrysoprase. In the Garadagh brocade jasper mineral, you will see lots colors with amazing natural patterns in autumn giving an illusion of seascapes. 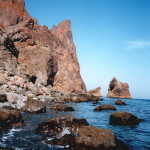 the heart” in Russian. This mineral is attributed with magical 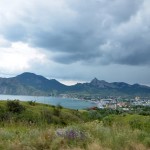 properties and often worn as an amulet. One can get to the Serdolikovaya bay from the Sphinx by a wide gorge named Guyar-Bach ( “Garden infidels”). This is a most beautiful bay, framed by bizarre rocks, divided into smaller bays. From the sea you can see a wall called Lagorio (named after the first volcanologist, who investigated the Kara-Dag), the base of which resembles an elephant. 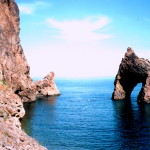 Sail Rock is after carnelian bay, where many swifts live. The Lion bay is guarded with rocks that look like lions. They call this the entrance to Hades. Behind the Lion 100 meters from the shore lies a rock arch 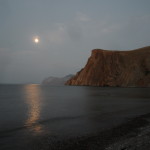 in the sea, about 30 meters in height and a width of 11 meters. The old name of this rock is the Shaitan-kapu “Shaitan fall,” according to a translation it is the Devil’s Gate. On this point sailing ships often used to flounder. They say that during the passage through the arch, you can hear the dull rumbling sound at intervals of a few seconds, as if the heart of Kara-Dag is beating. According to Greek legend, this is where the gods allowed Odyssey to go into another world and come back alive. 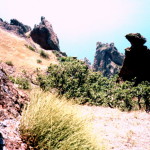 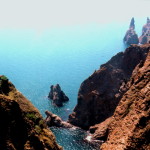 wish mentally and throwing a coin into the sea. The Golden Gate (“Zolotye Vorota”) is the Russian name given to this arch, due to it’s golden glow in the rays of the bright evening sun. In the calm weather the arch is reflected in the aquamarine water and the picture is simply fantastic. The Golden Gate of the Crimea is a symbol of the peninsula. 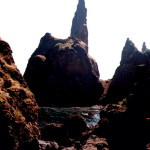 Rock Ivan Rogue at a height of about 60 meters resembles a man up to his waist in water, the rock protects the little harbor, this is where the slave trade flourished and where during the Russian-Turkish war 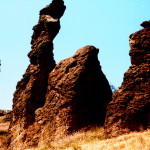 Cossack boats hid and attacked the Turks, freeing the Slaves from the slave brothels in Feodosiya. The Turks named the Cossacks “hartsyz”, which translates as “a terrible thief”, whence came the name of Razboinichya Bay ( “Robber”).

In the Kara-Dag every turn and twist on the trail offers a new surprise, one landscape is replaced by another and as if rising from the earth mysterious stone figures appear. These 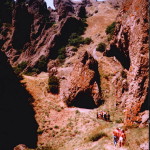 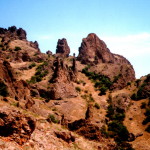 sculptures made by nature were created over millions of years, made of soft rock from volcanic eruptions, which has been eroded and washed away. One of the most beautiful places is Dead City on a ridge called Hoba-Tepe, where the outline of the mountains look like alien landscapes. Here you can see the shape of a horse, Pyramids, a King and Queen on a throne and a man with a hat. 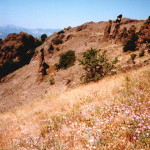 Among the unsolved mysteries of Kara-Dag is the story about a monster that appears from the sea near the Kara-Dag. Reports of the 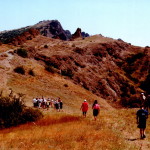 monster and documentary evidence is still there.
Kara-Dag is unique not only because of its natural beauty, but also because of its flora and fauna, where there are more than landscape zones: steppe, forest and sea. The flora includes about 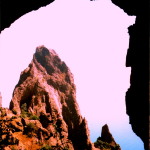 2782 species, 46 of which are endemic to this area. Among the animal world there are many endemic species, some of which are not found anywhere else on earth. For example, a rare white stone marten-belodushka, a peregrine falcon is only found on Kara-Dag.

A visit to these wonderful mountains should be much longer than a day in order to appreciate their awesome beauty, clean air and vistas.