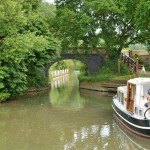 A couple of weeks ago we visited the glorious town of Lechlade in the county of Gloucestershire! It is located on the highest point of the navigable Thames on the southern edge of the Cotswold Hills, which is designated as an Area of Outstanding Natural Beauty. We 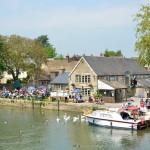 entered the town from the southern side across the Halfpenny Bridge whose name is derived from the old days when it was a toll bridge. From the bridge we enjoyed a magnificent view of the river meadows and Riverside Pub. 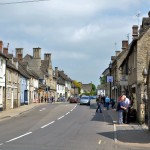 One can see the spire of St. Lawrence’s church, from miles around, it was built in the 15th century right in the centre of the town, with honey coloured cottages built from Cotswold stone lining the High street. Many antique shops are to be 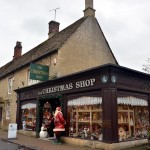 found in the town and most deserve a visit. At one end of the town there is a place which is a must visit. It’s The Christmas Gift Shop, a place of wonder, where at any time of the year you can immerse yourself in the atmosphere of the holiday and buy exceptionally beautiful Christmas baubles and gifts.

For centuries Lechlade was an important market town on the way from London to the West Country. Each of the six pubs in the town has it’s own interesting history. We particularly enjoyed visiting the Swan pub where we founded a lot of old and rare exhibits from its history. 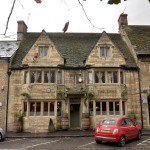 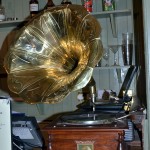 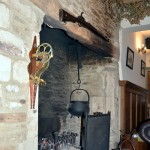 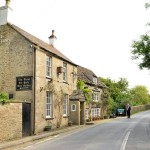 Lechlade was named after the River Leach. The river Cole and the Leach join the Thames at its highest point, where in 1229 the first 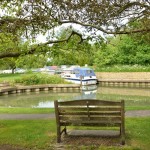 stone bridge outside of London, was built. The Trout Inn, an ancient Public house next to the bridge began life as an almshouse for workers in the 1220s. Later the building became part of the St. John’s Augustinian Priory founded in the 13th century and existed till its dissolution in 1472. The bridge and the lock located nearby kept the name after the Priory was dissolved. The building became an inn in 1472, and has been known as “The Trout Inn” since 1704 and still has a trout fishery justifying its name. In addition, for more than 700 years it has served traditional English fare to visitors and of course the local beers. 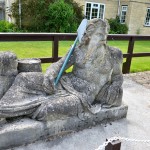 A monument of Father Thames was originally established in 1854 at the Crystal Palace grounds in London but after the destruction of the Palace by fire it was transferred to the source of the Thames, finally it has been moved here at St. John’s lock, the last lock on the Thames next to the stone bridge located a short distance outside Lechlade.