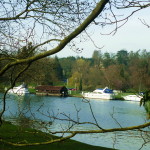 The romantic scenery of the River Thames has always fascinated poets, travelers, nobles, and kings. More than a hundred years ago Jerome K. Jerome described his journey along the Thames in a novel called “Three Men in a Boat” it contained so much fun and humor, that many people began dreaming of water travel, since then boats on the River Thames have increased over the years. Riverboats have significantly changed in the last hundred years and today river cruises are one of the most popular forms of leisure and lifestyle. 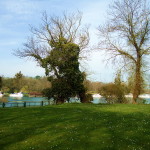 floating houses, where one can live whilst floating on the river and enjoying the beautiful scenery dotted with lovely mansions and making stops in small towns for supplies in the Thames Valley. Jerome lovingly describes many of these towns in his book as “magical” or “fabulous” and some as the most beautiful on the river. 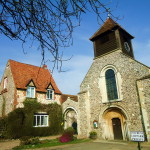 Previously one of my stories of the settlements along the Thames was about the Danesfield hotel with it’s unique landscaped park of Topiaries which overlooks the river and on the opposite side of the river, the ancient settlement of Harley. There are lots of picnic areas equipped with tables and benches along the riverside where boat travelers can stop and in the summer these places are full of nature lovers, because even years ago, Jerome wrote “I could stay a month without having sufficient time to drink in all the beauty of the scene”. By the way the landscape around the village of Harley featured in a film about James Bond “From Russia with Love.” 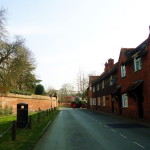 In 1086 a Benedictine Priory was founded in Harley as a cell of Westminster Abbey, which existed until 1536, when Henry the VIII closed all the monasteries. Priory church still survives as the parish 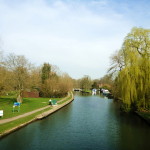 church to this day. Some monastic buildings of the 13th and 14th century are now private homes. The village is very quiet and very provincial, except for their value is considerably higher than the average price in villages nearby. There was once a rich Tudor mansion in this village known as the “Lady Place” which was owned by Baron Lovelace but was demolished in 1837. Another historic building is the pub “The Old Bell Inn” which was established in 1135 as a guesthouse of the monastery. The bell hung above its door and was rung to announce the arrival of guests. One of which was King Henry the IV. 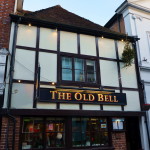 It is an interesting coincidence that in the neighboring town of 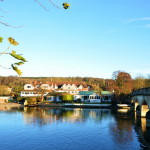 Henley-on-Thames there is also has a pub called “The Old Bell“. This is also the oldest building in the town, built in 1325 for a wealthy merchant. From Harley to Henley we traveled by the car past the picturesque and fabulous wooded green hills of the Chilterns. We crossed the old bridge, built in 1234, which has been renewed several times since then. There is evidence that the bridge existed much earlier and that the Romans crossed this bridge in 45 AD, when they invaded Britain, while the settlement of Henley-on-Thames is mentioned in chronicles as far back as 1179 when King Henry II bought land here for building construction. 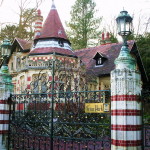 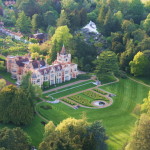 of some buildings; there are about three hundred of them. But the incredibly beautiful old mansion of “Friar Park” is not open to visitors. This Victorian mansion was once owned since 1970 by the guitarist George Harrison of the “The Beatles”. The magnificent Park of the estate, which was landscaped by the musician and his brothers, appears in the Harrison music videos and on the cover of his album. The mansion was closed to the public after the attack on the musician in 1999. But I managed to find a photo on the Internet of this most beautiful and important house in the neighborhood. 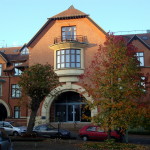 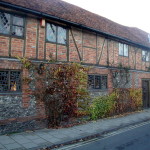 Henley is not a big town but it is known worldwide for the Royal Regatta, which has taken place there since 1839 and some of the best rowers and sailors from around the world arrive on mass to take part in the competitions. If you should find yourself in the area during the regatta season you will find hundreds of marquis erected along the riverbank to entertain all the visitors with light refreshments and of course champagne.