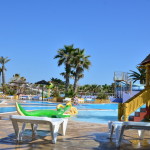 In most countries people have a preferred way of spending their holidays. In France it seems that camping is sometimes a way of life. You can find cozy campsites with mobile homes in the mountains, along river valleys, in nature reserves, along the coast and almost all over the country you can see caravans, motor homes and tents everywhere.

Pyrenees-Orientals is a region bordered by Spain and the Pyrenees mountains, which flow right 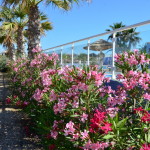 down to the Mediterranean Sea. It is a favorite holiday destination not only for the French but also for many Europeans. We stayed for a few days in a camping place located close to a sandy beach called “Mari Sol” near the village of Torreilles. This is one of many family holiday places, where you can rent a small mobile home with two double bedrooms, a shower room and a kitchenette complete with table and chairs for a very reasonable price. June time this home costs about 59 euros per night, where there are actually six sleeping places as the bench in the lounge converts to another double bed. 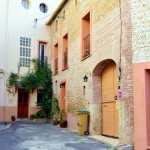 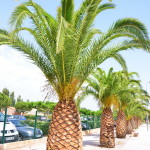 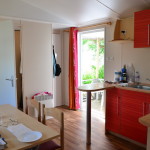 In the camp there are many landscaped areas, where, among blooming alleys there are restaurants, shops and swimming pools with children’s play areas and water slides. I personally prefer to swim in the sea, as for me it does not compare with any swimming pool, so long as the temperature is not too cold. On the first day the sea temperature was only 18C, which is not very typical for this region as it should be around 22C. To swim in the Mediterranean Sea is also enjoyable because the water is much more salty than in other seas. In the Black Sea salinity is 18 ppm, while in the Mediterranean it is 39 ppm, only in the Red Sea is salinity slightly higher at 41 ppm. Probably some swimmers never noticed, that the water keeps you on the surface much better than in the Black Sea.

The towns of Saint-Cyprien nearby has a large port full of expensive yachts and beautiful houses, frequented by affluent tourists, whereas further east down the coast is the town of Argeles-sur-Mer, which is favoured by families as it has magnificent vast sandy beaches with evergreen waterfront, free car parks and surrounded by mountain scenery, the town also has a wonderful atmosphere, where you walk along alleyways and relax in the restaurants and which serve a great variety of Mediterranean cuisine, especially crustacean dishes. 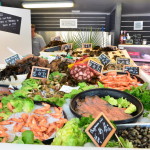 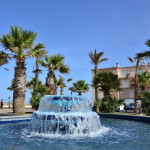 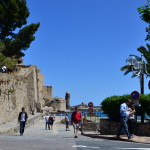 In the town of Collioure there is an antique castle, built by the Knights Templar in 1207, then rebuilt as a royal castle.

Perpignan, the capital of the Pyrenees-Orientals in southern France, is where the Palace of the Kings of Majorca was, updated in the 17th century on the place of the high citadel of the 14th century. The town has an old-fashioned charm and in the old antique and narrow streets there are many restaurants serving my favorite dish, “Moules au Roquefort” marine mussels with Roquefort cheese sauce. They are worth a trying! 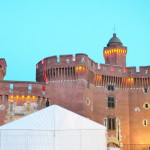 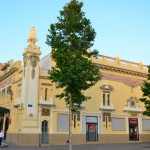 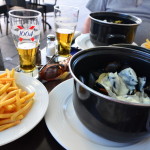 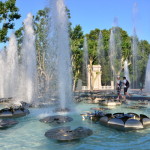 Perpignan is located about 30 km from the sea but there is no sea aura here. Instead, you have a magnificent fountain, with coloured lights, which constantly change to create a most beautiful display after dusk. Hence we reached the end of another day on our European tour.