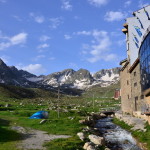 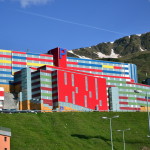 France located at an altitude of 2408 meters above sea level, we got up at about 7 am only to find that the town is already awake, the shops opened their doors at 8am and crowds of tourists filled the streets by 9am. It is the highest ski resort in Andorra and is also visited by summer travelers, as it is the last opportunity for them to purchase duty-free goods before leaving Andorra. There are many hotels to accommodate them as it is also the second biggest duty-free shopping center after the Capital Andorra la Vella. 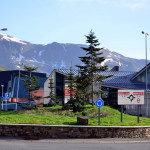 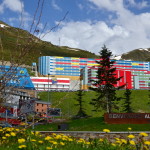 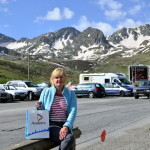 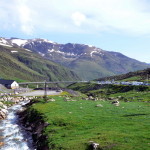 At 10 am we were once again driving on a mountain road, our route 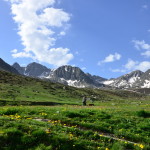 was along the RN20, RN116 through the Pyrenees to Languedoc-Roussillon, where the Pyrenees fade into the Mediterranean Sea. The winding road follows snow-capped peaks, blossoming valleys and ski slopes that look like green bands on the mountains in summer. Extraordinary beauty is everywhere! I wanted to stay on the lookout points overlooking the cliffs and gaze without stopping, holding on to this feeling of peace and tranquility forever. 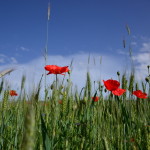 natural reserves with unique sites. Among the diverse wildlife (marmots, deer and golden eagles) there is a large number of rare species of butterflies and other insects. In the “Valley of Flowers” European botanists have been organising meetings since the 18th century. 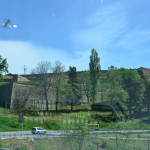 On the RN116 route there are two historical fortresses included in the UNESCO World Heritage Sites, which were designed by the French architect, Sebastien Le Prestre de Vauban, who was a military engineer and a Marshal of France, also upgrading the fortifications of around 300 cities.

One of those cities is the Citadel of Mont-Louis with its city walls reaching an altitude of 1600m above sea level built between 1679 and 1682 during the time of Louis XIV and used to protect France against the Spanish invaders. 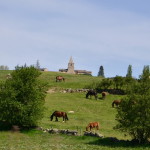 Another city we passed on the way Villefranche-de-Conflent founded in the 11th century, on 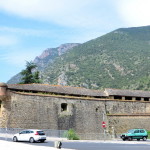 the slopes of the eastern peaks of the Pyrenees, and became the border between South and North Catalonia, after the partition of territories between France and Spain in 1654. Sebastien Le Preste de Vauban also designed the city walls, and erected Fort Liberia on the top of the hill.

From this town an alpine railway was laid passing through valleys and mountains to the town of Latour-de-Carol, a local landmark and tourist site. 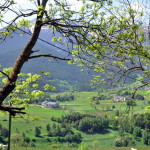 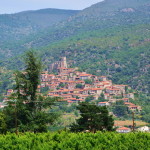 Mediterranean took about four hours, taking into account all planned and unplanned stops in beautiful places and cozy little French villages. We arrived back in the Pyrenees-Orientales, part of province Languedoc-Roussillon, which has an interesting historical past, a Catalan culture and lots of modern resort towns like, La Grande Motte, Leucate, Barcarès, and Saint-Cyprien, with sandy beaches, quiet lagoons, lakes and hills and even reddish rocks off the coast of Côte Vermeille. 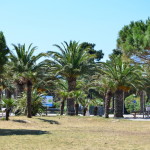 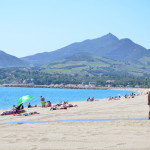 Sunny Argeles-sur-Mer on the Mediterranean was a wonderful end of our day. In my next account I will write about our very long journey along the Southern coast of France at the foot of the Alps maritime.