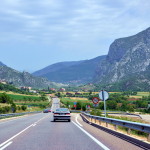 Like they say, “you can never feel the real power of the mountains until you start climbing their summits!” Let’s face it. Mountaineers climb the highest peaks of the world not only to set records but also to admire the beauty of nature from above. Motorists, who tour mountain areas with twisting roads, get aesthetic pleasure by admiring the ever-changing scenery on every bend. We traveled from Spain to Andorra, one of the smallest landlocked countries in Southwestern Europe, located in the Pyrenean Mountains, which lie between France and 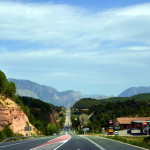 Spain. We chose routes C37, C55, C26, C14, which are slightly longer than the standard highway in order to explore the beauty of the mountains. 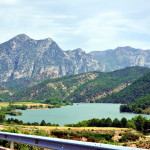 The Principality of Andorra has existed and has been written about since 778 AD, when Catalan peasants inhabited the mountain valleys. Andorra derived from the Basque language of the people who live in the north of Spain, means “wasteland” (“andurrial”). Why Basques decided to call these lands wasteland, I will never understand, maybe it was due to its small population. 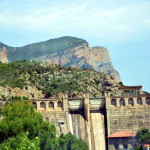 The history of this country has an unusual episode when it was proclaimed a Kingdom in July 1934. A Belarusian immigrant and 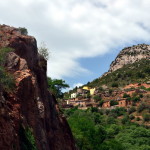 adventurer by the name of Boris Skossyreff, with the support of a local population of five thousand, declared himself King Boris the first. This newly proclaimed King issued progressive laws and even printed a Constitution, which protected the interests of the Andorrans. Maybe this royal history would have lasted to this day, except that the Bishop of Urgell, who was one of the two existing Princes of Andorra, arrested King Boris after only 13 days, thus ending this short lived Kingdom. For a long time Andorra was isolated from Europe and was a depended country until 1993, when the State adopted the first constitution declaring itself a parliamentary democracy. Due to the liberal tax system that has been adopted, this poor patriarchal country soon developed into a thriving tourist center. 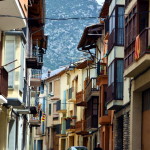 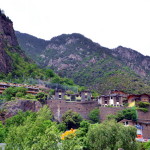 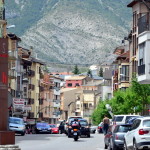 Landscapes along the way were mixed with a lot of abandoned and dilapidated old buildings, which probably have long and varied history spanning many years. Although they looked sad, they nonetheless held a beautiful and mysterious air about them. It was a shame that we had no time to explore their historical backgrounds. There are a lot of nature reserves in northern Catalonia. The scenery got greener and more beautiful with fantastic views the higher we drove up the mountains. Close to Andorra the road leads along some rocky peaks with glacial lakes and narrow valleys with some of the loveliest ever alpine meadows. 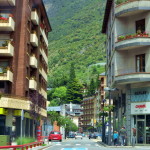 We made our first stop in the town of St Julia de Loria. In this region, 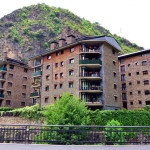 as well as in most of Andorra, there are many mobile home parks which also offer a variety of other services, you can rent a small mobile caravan with all amenities to accommodate individuals and families, or simply park in a designated place of the recreation park, usually next to a river or a beautiful area and sleep in your car for the night. Breakfast is usually offered in the nearby bar or restaurant. Finally, there are hotels at very reasonable cost depending on the star grades from 1 to 5. 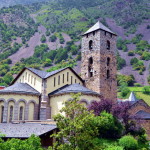 Andorra la Vella, the capital of the Principality of Andorra, is located 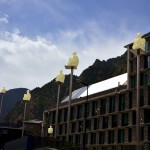 1079 meters above sea level in the valley of the river Valira. In winter skiers from all over Europe come to ski on these mountains, as well as year-round tourists who flock here, the highest European capital with duty-free shopping, where prices are positively lower. The whole town resembles a huge shopping center. 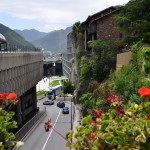 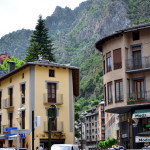 In Andorra la Vella we parked in an underground car park and went for walk in the hot summer sun, where the temperature had reached about 30C that June. Summer in Andorra is usually mostly cool and dry. I was also surprised at the unusual layout of the town, when we entered one building from one side of the street, then climbed a couple of floors in an elevator and came out into another street on the opposite side of the road. The architecture of the town is mostly modern, which is consistent with the mentality of the local population. 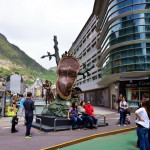 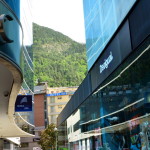 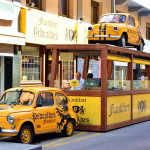 A shopping-mania atmosphere reigns in the streets everywhere. Tourists with packages and bags are roaming the streets, from store to store, comparing prices with polite shopkeepers gladly offering discounts due to the severe competition. The merchandise sold consisted mainly of electronics, tobacco, alcohol, perfume and jewelry. 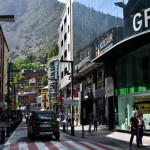 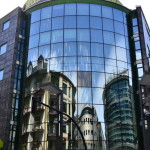 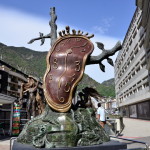 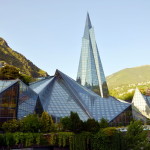 One of Europe’s largest health spas the Caldea, with a sharp glass 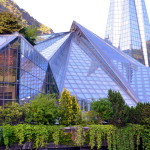 dome resembling a huge piece of ice, is a unique and unmatched setting in the Pyrenees. It was built in the town of Escaldes, which is next to the capital of Andorra! Under the arch of the thermal center there are baths, saunas, grottoes, and sunrooms. You really need to spend at least one full day here to appreciate it. 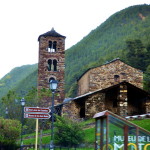 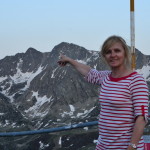 to the French border. Bending totally deserted motorways gradually climbed up to the top of the mountains. The absence of cars, apparently, is due to drivers’ choice to use the new tunnel, which is most certainly faster. But using the tunnel and driving in the dark, you deny yourself the pleasure of stopping at the lookout points along the mountain route to admire the sunset over the spectacular peaks located 2,800 meters above sea level and still covered with snow in mid June. 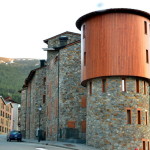 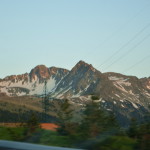 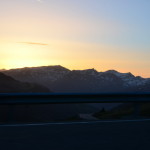 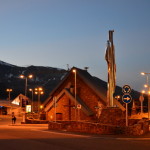 The road to France becomes extremely tortuous! We passed along 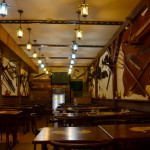 the way, the ski resort of El Pas de la Casa located near the French border at an altitude of 2408 meters. After a sharp turn on the road French town lights suddenly appeared in the distance, inviting us to stop and relax for the night before continuing our journey.