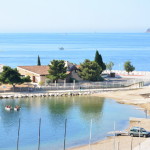 “What azure!” – That was what French writer Stephen Liegeard expressed when he first set sight on the beauty of the bay of Hyères. In 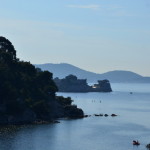 1887 he published his book called “La Cote d’azur“, and since then the rugged coves on the south-eastern Mediterranean coast of France from Toulon to the Italian border, bordered on the north and east by the Alps, became known as the Côte d’Azur. Blessed by 300 sunny days a year, gifted with a mild Mediterranean climate, where despite the high summer temperatures 35, does not feel stuffy because of the low humidity, the region is a paradise for holidaymakers. 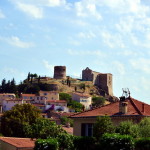 The City of Toulon, founded by the Phoenicians, became the main 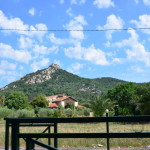 naval base of France. King Charles VIII started to build a port in Toulon harbour due to its natural advantages and shapes. While the port was being completed, an architect called Sebastien Le Prestre de Vauban constructed the fortifications. Napoleon Bonaparte began his career in Toulon. In 1942 the leader of Nazi Germany sought to acquire the city, understanding it’s strategic value, in order to stop this happening, the French leadership sank 77 ships in the harbor of Toulon. It was one of the brightest pages in the history of Toulon. 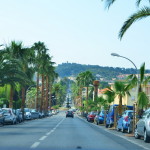 The nicest part of our trip along the Côte d’Azur began at Toulon. 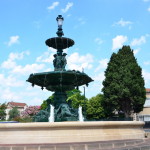 The town of Hyeres is situated next to Toulon and was founded as a Greek colony with lots of medieval architecture still preserved to this day. In the 18th century Hyeres became the first French resort after the British and French aristocrats and celebrities started visiting the place. There are incredibly beautiful avenues lined with palm trees in the town, that’s why it is also known as Hyeres-les-Palmiers.

The huge variety of landscape along the cost is decorated with many shades of flowering shrubs, especially pink Oleander and yellow Cacti. I would like to see this beautiful area in the spring, when the coast is blooming with Mimosa flowers creating thousands of small yellow delicate suns. Thanks to the abundance of mimosa on this cost, the town of Bormes-les-Mimosas got its name and the coast from Bormes-les-Mimosas to the town of Saint-Raphael is called the Golden Road of the French Riviera. 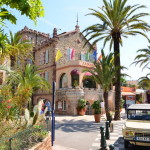 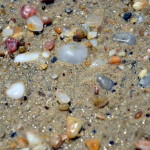 have been named after the lavender which is grown everywhere in Provence. But in fact the name was of a former fishing village which derives its name from the local form of the Occitan called Lavoir, which means a public place for washing clothes. Probably such a place existed in the old days but now there are 12 clean beaches and they are all marked with blue flags. Water in the Ligurian Sea has a really azure hue all along the coast. We stopped to swim at one of the beach, where the sand was littered with silver speckles making the water sparkle with or without sunshine. 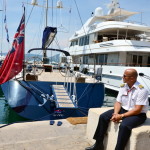 We next visited the ancient town of Saint-Tropez, I was dazzled by 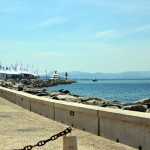 the white sailboats and yachts that were moored in one of the most beautiful harbors in this area called Port Grimaud. The ancient castle of Chateau de Suffren with a thousand years of history preserved in the port and the fishing quarter of the city not changed for the past hundred years. This small fishing village became famous in 1956, when the movie “And God Created Woman”, starring Brigitte Bardot was made here. Brigitte Bardot, who played a major role in the movie, is now famous all over the world and still lives in the town. Saint-Tropez became a fashionable resort for the glamorous, high society, the elite, and the place of dreams for many romantics. 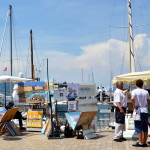 From the 18th century, and perhaps earlier, painters came to Saint- 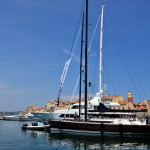 Tropez and other towns of Cote d’Azur for inspiration to paint the beautiful scenery. One can recall Henri Matisse, who created the painting “Luxury, peace and bliss” in Saint-Tropez, Pablo Picasso, who created in Antibes, Renoir and Cézanne, who wrote Mediterranean landscapes in Cagnes-sur-Mer. Many artists were paid to stay in the hotels in exchange for their paintings, which are still exhibited in small art galleries. There is still a process of masterpiece creations on the waterfront of Saint-Tropez, where it is an artist’s studio and an art gallery at the same time. 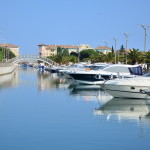 I should mention that arriving in all the towns of the Côte d’Azur, you 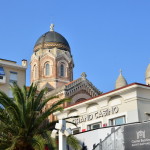 will never tire of admiring the beauty of the scenery which is unusual and in many respects similar, their similarity is that here as nowhere else you feel an atmosphere of peace and joy of life. We stopped in Frejus and Saint-Raphael, also two charming places associated with ancient history. Saint-Raphael’s old harbor is amazingly beautiful and the tower of the Cathedral of Notre Dame de la Victoire can be seen from any part of the town. 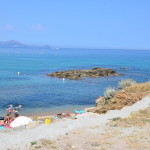 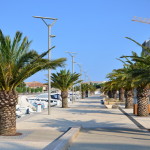 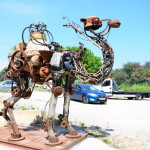 On the D559 highway we traveled along the coast of the Ligurian Sea in the direction of Cannes, where many viewing platforms are constructed overlooking the small bays with crystal clear waters against the background of red rocks from the Alps that terminate in the sea. 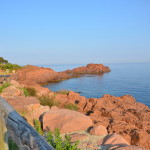 Our last stop this day was the town of Cannes, a magnificent holiday 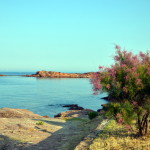 resort and host of the Film Festival and Cannes Lions International Advertising Festival. Once upon a time it was a small fishing village when an English lord visited this place, fell in love with the beauty of the coast and built a large villa in the village. Slowly Cannes became the popular holiday destination for the English aristocracy and Russian high society. French writer Guy de Maupassant wrote “Princes, Princes, Princes are everywhere.” Today, to meet a prince on the street is not so easy but to see a celebrity in Cannes is very common. 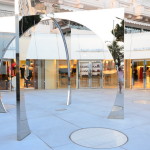 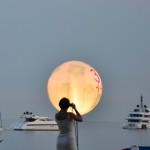 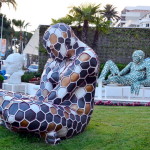 The city was founded either in the 2nd century BC by the Ligurians or the Romans in 42 BC, which one is correct is not precisely determined. Here, the rich history of architectural monuments demands that you devote more than one day on your visit. The Croisset walk is a must along the promenade at sunset and a stroll around the small ancient streets, where the restaurants and cafes are filled with fun seeking tourists, since the cuisine of Provence is famous all over the world. 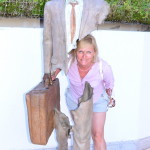 Many people believe that traveling around different towns, man loses part of himself and becomes invisible at the same time. In a reminder of this quotation French artist Bruno Catalano has created bronze sculpture called “Les Voyageurs” that you can see on the seafront at Cannes. The statues have large parts of their bodies missing to signify this saying. Traveling around the country, we discovered a completely different world and many ancient traditions. What seems to be normal and customary in one country, to another it is completely unacceptable. It all depends on the prevailing culture, local history and customs and at the same time man is actually looking for freedom… Was it this, that the art of Bruno Catalano was trying to portray?

Cannes is one of those places on the Cote d’Azur, which is mainly visited by well off tourists mostly with yachts in the harbour or famous film stars. In the next part I will write about our journey from Cannes to Monte Carlo, another glamorous and very expensive Principality…