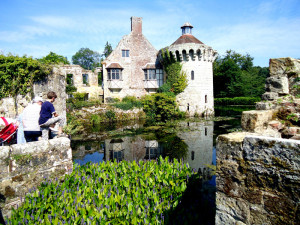 In the County of Kent in England, there is an island on a small lake with a classic medieval castle called Scotney; it is surrounded by a ditch and a 19th century picturesque park. The first person to own this castle was a French knight called Lambert de Scotney in 1137.

During spring and summer, the landscape surrounds of this 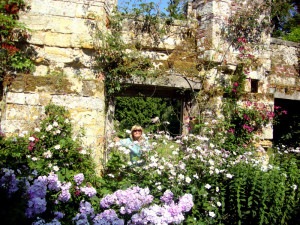 now ruined castle with derelict walls and gaping windows, changes to a blossoming world of pink azaleas, lilac bushes, rhododendrons, creeping wisteria and beautiful roses. The wonderful setting of the park creates an aura of mystery and magic. This fantasy world helped to set the scene for Shakespeare’s “Midsummer Night’s Dream”. The idea of creating “live” theater was undertaken because the play was written for a private wedding party and the author assumed the play would be performed in the open air. 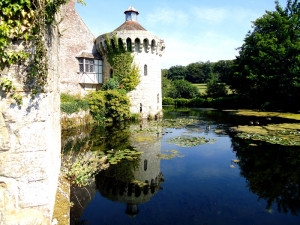 The park becomes a bustling scene on summer evenings with huge crowds of spectators and actors appearing on an imagined stage among the bushes. The plays fairy elves coupled with the moonlight blend harmoniously in this woodland scenery. Can you imagine anything more romantic than a fairy tale being enacted in this way? I would love to experience this wonderful spectacle in this fairyland park.

This castle same as many other ancient places has its own ghost, which is said to be about 300 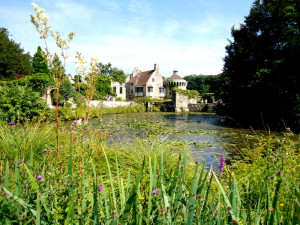 years old. Arthur Darrell the owner of this castle in the 18th century was under investigation regarding some smuggling accusations. He managed to escape from justice by instigating his own death so as to stop prosecution and continue with his unlawful business. They say his “body” was delivered to the castle for burial in 1720 but the customs inspector in charge at the time suspected that he was still alive. When he was about to start his investigations, Arthur Darrell killed this clever and ingenious inspector. They named this Customs officer, now immortalized in the history of the Scotney castle,  as he sometimes emerges above the watery ditch where, according to legend, his body was thrown, hence the dripping wet ghost. This story was only given credence in 1924 when Darrell’s coffin was opened and only stones were found inside. 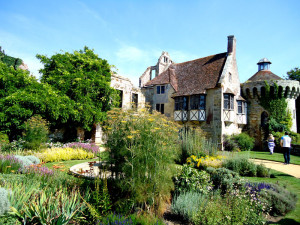 There are many legends and stories about everything in the world, it is almost impossible to ever know the real truth about anything but what is the point? We all love secrets and unusual stories, mystery attracts us to these places. Therefore when you will next visit this castle, take a walk in the park and try to imagine some mythical scene. The atmosphere for this is especially helpful if you come here in the months of May or June. 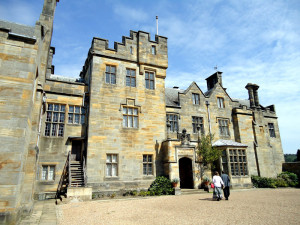 bank next to the romantic ruins of the old castle which can also be visited. This marvellous park will fill your imagination of the fantastic world described in “Midsummer Night’s Dream” and then maybe you will have a sudden realisation that the world of fairies and elves is only a reflection of the world we live in.