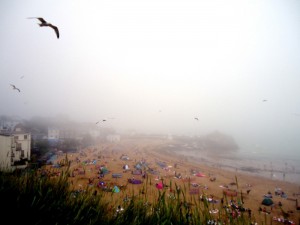 Where is this mysterious island with such a romantic name as Foggy Albion? The word Albion, a translation from the Roman Latin meaning white, was attributed to Great Britain in ancient times due to a constant white fog that covered these isles not so long ago. This pale grey fog that looks white from a distance gave rise to the name of Foggy Albion. This name became synonymous with Britain because of the fog pervading over these islands until the 1960’s. So why was it so foggy?

It was not so much, the fact that it is an island surrounded by the Atlantic Ocean, the Channel, the Irish and the North Sea but more because the inhabitants were burning a lot of coal. The British referred to it as Smog meaning a mixture of Smoke and Fog. To imagine a house in Britain without a chimney was very difficult, most even had chimneys in every room since apart from wood it was the only cheap fuel available to keep warm and cook with. Most of the population lived in their own homes as flats were not common giving rise to a lot of chimneys emitting smoke into the atmosphere over many centuries.

The fireplace was the center of the home, giving it a warm and a cozy atmosphere, the place where the family gathered to exchange views and gossip as well as enjoy evenings playing music, have sing songs or listen to the radio as television was not yet available.
Inhabitants of major cities remember days when visibility was just one meter on foggy days, affecting people’s health and making travel very difficult. It hampered progress and the economy, so the government of the day brought in a law forbidding the use of smoky coal from city centers.

Today most house are heated by smokeless fuels such gas, electricity or oil and a lot of people also now live in flats which no longer have a chimney.

The fireplace is still a wonderful symbol of a great past and tradition, it symbolizes the centre of any room, it is enjoyed mostly around Christmas time when it is decorated with cards and stockings waiting for Father Christmas to come down the chimney. Lots of Inns, Public houses and homes still light fires with wood or a pretend ones using gas with lava stones. Today the British Isles are no foggier than France, or Russia, despite the influence of the Atlantic Ocean and the many seas that surround it.

Fog is still part of our inheritance but today it is clean and natural, not so dense and very occasional, mostly on open ground or by the sea. Once I was lucky enough to experience this illusive Fog. I happen to be visiting the beautiful coastal town of Broadstairs in the county of Kent. It was the end of June and the weather was very promising, sunny and warm with a cool sea breeze. I was looking forward to a pleasant rest by the sea with a bit of sunbathing or even a swim. I was just about to go on the beach when suddenly without warning and totally unexpected the town was shrouded in a veil of crude damp air; this whitish fog was so dense that the beautiful seaside landscape disappeared … What a disappointment! But it seemed that the local inhabitants were not bothered by this as beaches stayed full of people and visitors. It appears that foggy weather is not that unusual. When I asked a local young man, where the sun had gone, he answered that it was a common thing to happen especially as the town is facing the English channel.

What Englishmen think about the weather is another story, but the fog dissipated just as quickly as it had appeared so I was able to enjoy my day out after all.