Chocolate, as we all know is a “happiness hormone”, its use contributes to the development of the hormone serotonin responsible for positive emotions in the human body. Walking along the streets in the city of Bruges, you can find chocolate shops almost on every corner; you cannot pass one without the whiff of an appetizing smell of delicious chocolate. After sampling several bits of “chocolate” energy, we set off with joyful euphoria to sight see this most beautiful Belgian city.

The first fortress in Bruges dates from the first century BC, after the conquest by Julius Caesar, 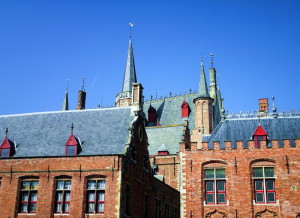 to protect the place against Pirates as it is connected to the open sea by a navigable river. Due to its favorable location, Bruges became the capital of Flanders in the 7th century. According to legend, the name Bruges comes from the Old Norse word meaning landing, which was probably given by Vikings who conquered the city in the 9th century. Also in days gone by, there was a fair on the bridge crossing the river and “Bridge” could have been abbreviated to Bruges by several European languages. Bruges started flourishing in the 13th century, when it became the center for trade in Northern Europe. Historians suppose that the first stock exchange in the world was opened in Bruges in 1309.

The city is crossed by three deep channels with 54 bridges, that is why it is sometimes called the Venice of the North. On one of the many tourist boats plying these canals, we took a trip around the city. We came across a lake they call the Lake of Love, which is full of swans that are very revered in this city and permanently live there. According to legend, in the 16th century the people of this city executed their administrator, whose name was “Pieter Lanchals” which translates into “long neck”. His family coat of arms depicted a white swan, so the residents of the city were punished by the very rich family of the deceased by having to keep swans on this lake forever. 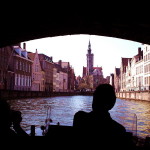 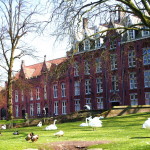 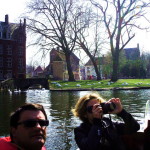 Ancient houses with unusual facades made of red-brown brick and covered with tiles lined the river. Almost all the houses are topped with triangular roofs in a Dutch style and decorated with weathervanes, pinnacles and statues. Some houses have wooden facades, darkened from time and the weather. One can imagine how beautiful this Flemish city must have looked in the middle Ages, if it is so enchantingly unusual today. 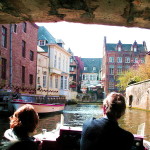 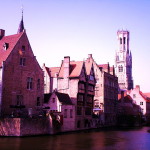 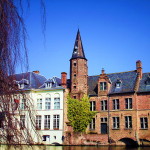 A horse carriage trip is a must, you can take a short tour around the city center or you can sit

back and imagine what it was like when there were no other modes of transport available. We decided to view the city on foot so as to enjoy and admire the architecture since round every corner we turned there were more and more beautiful buildings to see.

There are two main squares in the city. In the largest one of the two “Market Square” there is a very old building with a Belfry tower that you can visit and climb dating back to 1240, which was used as a watchtower in ancient times with a variety of bell sizes and each bell had a distinct sound warning of danger or other important events. 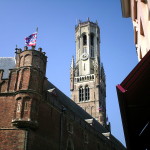 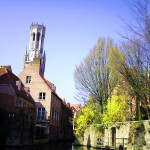 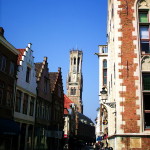 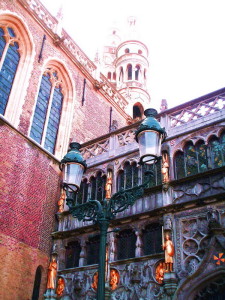 The other square “Burg” is the administrative center of the city, and contains buildings of several architectural styles. There is a Gothic 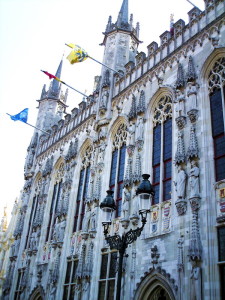 City Hall of the 14th century, whose facade is decorated by 48 niches with new stone sculptures, the Gold plated original sculptures of biblical characters and the Count of Flanders, were destroyed during the French Revolution but were replaced with copies in the 19th century and renovated again in the 20th. There is the Old Civil Registry built in renaissance style, the former Courts of Justice in neo-classical style and the former home of the Deans of St Donatius in Baroque style. Another very remarkable building is the church of Basilius and the Chapel of the Holy Blood which was built in a Romanesque style in the 12th century; the original façade was remodeled in the 16th century into a late-gothic and renaissance style. According to legend, the Crusaders brought a few drops of the blood of Christ from the Holy Land. This relic of holy blood in a bottle made of rock crystal has never been opened and is stored on a silver altar which can be viewed on certain days. Unfortunately, we could not see this secret, even with our glasses on. 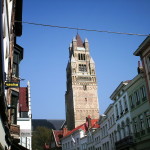 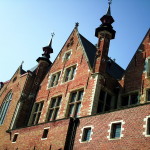 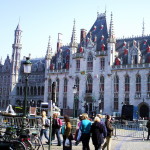 Finally before leaving, we visited the Gothic Church of Our Lady (Notre Dame) housing the only sculpture outside Italy by Michelangelo and Saint Salvador’s Cathedral with it’s very unique paintings, there were also many other places of worship to visit and of course, the Museum of Chocolate! This city has so many museums and historical relics that you have to spend a few days here in order to see them all. We hope to be backing one day soon. 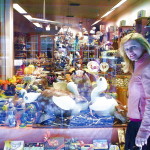 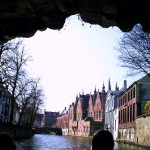 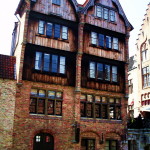