Part 2 and we have two more beaches of southern England (Brighton and Selsey ). 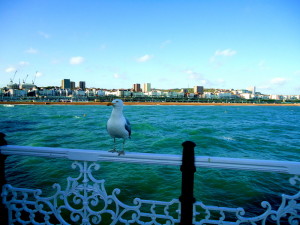 5. Brighton. After the happiest city in Britain mentioned in part one of my Beaches section, we now visit Brighton, also known as “London by the Sea”, because you can get here from the capital in just one hour. In the 18th century, Brighton had become a popular SPA – resort and like all other coastal towns, it has retained it’s charm to this day. A lovely pebble beach, a Pier complete with an amusement park, streets lined with the rich architecture of Georgian terraces, plenty of roadside cafees, lots of amusement arcades and complete sexual freedom.The reputation of this liberated city is home to a variety of sexual minorities and boasts the presence of a nudist beach (it is in fact the gay capital of britain).

Past engineering achievements have glorified this town. At low 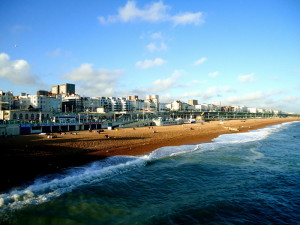 tide, on the waterfront, you can see some concrete sleepers. These are the remains of a unique engineering structure, which was designed and brought to life by the engineer/designer Magnus Volk in 1896. The vehicle he built was a blend between a ferry and a tram, it moved along an underwater rail some 4.5 km long at a distance of 90 meters away from the shoreline. This electrically powered railway connected two piers, one on each end of the beach. “Sea bus” as it was called, was named ”Daddy long legs” by the locals, because of its unusual construction. This unique and advanced railway system operated for several years.

After walking along the magnificent promenade you must visit the exotic Royal Pavilion. Narrow streets inherited from the original fishing village will lead you past antique jewelry boutiques and avant-garde shops to this amazing fairytale palace. A most extraordinary palace designed by the architect John Nash in an Indian style and looks like a mini Taj Mahal. The palace was built for the crown prince who eventually became King George IV. The prince used the palace for secret meetings with his mistress. No matter where you stand on the grounds, you can snap great pictures from every angle. Inside the building, you can enjoy the fascinating interior as it is now open to the public.

The active cultural life of Brighton is worth a mention. Some cities in the world boast extraordinary traditions. Brighton also has many music festivals. The most significant musical event occurred here in 1974, it was the Eurovision Song Contest, when the Swedish pop group ABBA won the top prize with their song “Waterloo.” Thank you, Brighton, for choosing “Abba”, a song which we still enjoy listening to with great nostalgia and much joy. Also, it holds the second largest arts festival in the world, the world’s beard and mustache competition and a festival of the richest people connected with Brighton. 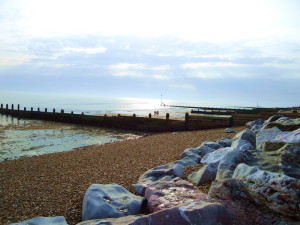 6. Selsey. The small town of Selsey is located at the southern end of the Manhood peninsula. It’s very quiet place, not too fussy and looks very comfortable, so it was on the day we visited and I also noticed that no one was in a hurry. When I saw the sea, I realized why: the bluish-silver mirror of water merges with the horizon and feels as if it goes on to infinity. The pebble beach is considered one of the best and cleanest in West Sussex and is of great scientific interest, because of the unusual rock formations at the bottom of the sea and large stone boulders on the banks. The problem here is that the sea is washing away the coastline and is of great concern to the locals and scientists. It could be that this beautiful beach will one day disappear altogether. 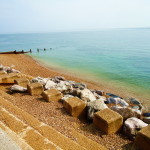 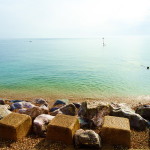 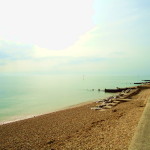 Once upon a time Selsey was the capital of the South Saxon kingdom. In 1877, they found silver and gold coins on the beach dating back to the Celtic Atrebates rulers and later other gold artifacts with runic inscriptions were also found on this beach, these can now be seen in the British Museum. Nothing here reminds one of the old days and prehistoric life anymore. But the merging of the horizon and the gray-blue sea reminds us of the impermanence of life. Sitting on this beach whilst looking out to sea you can indulge in some philosophical reveries.

Next time in part 3, I will tell all about the English Riviera.