7. TORQUAY. The English Riviera spans the south coast of Devon, the fabulous town of Torquay, is located on seven hills along the harbour in the south-west of the English Channel. Because of the warm waters of the Gulf Stream, the climate in this part of Britain is unusually mild. Cypresses and pine trees along the shores help to create a wonderful scented environment. The Palm trees were first imported here from New Zealand, to create an atmosphere of a

Mediterranean resort. Places of interest in Torquay are, the promenade along the waterfront, The Victorian architecture, The Pavilion, the fountains, the white villas that dot the hillsides, and the luxurious pleasure yachts in the harbor with their spiky masts and white sails. There is also a 35 km coastline with panoramic views of the bay! That make you wish you could live here forever! The young Agatha Christie did not want to leave Torquay and enjoyed some of the best days of her colourful life writing her great novels.

Many thousands of years ago, during Paleolithic times, ancient human settlements existed here, as confirmed by recent studies of a local cavern called Kents, which dates back about 2 million years BC. Since 1824 excavations have found 70 thousand artifacts. One of them, a fragment of ancient man is the oldest known in Europe. 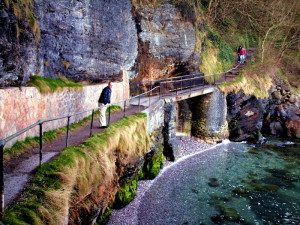 Recent history about Torquay tells that is was a small fishing village. During the Napoleonic wars, wounded sailors came here to convaless and to be treated, that’s when it was that the local climate had tremendous healing effect. In the early 19th century the village grew into a very popular sea resort.

Someone said that the town has a south of France atmosphere. I 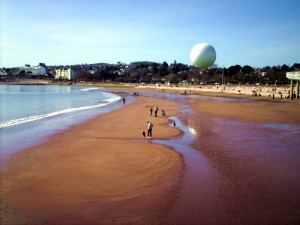 cannot compare Torquay with Montecarlo or any other city in the South of France as I have not yet been there but walking along the corniche next to the beach, I closed my eyes and imagined those Victorian ladies with their beautiful elegant white gowns strolling along the promenade holding pretty parasols and being escorted by snoby gentlemen enjoying the atmosphere with a glint of happiness in their eyes. Today, only the costumes have changed, modern British people are not particularly concerned about wearing exquisite costumes, clothing is now very simple, mostly shorts and swimming costumes. Visitors to this town do not seem less happy than those who visit Bournemouth.

In Torquay there are several extraordinarily beautiful sand and gravel beaches with crystal clear waters. Babbacombe Bay is interesting for it’s Beccia cliffs in the geological park. It is the only urban geopark in the world out of 53 other ones worldwide. A picturesque “serpentine” pathway leads you down to the sea and a cozy romantic beache with cristall clear water surrounded by rocks. 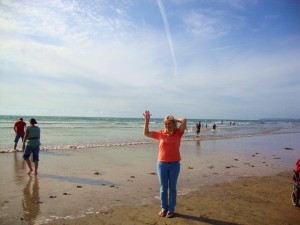 8. ILFRACOMBE in North Devon is in what is known as “the valley of the sons of Alfred”. A small pretty town with a harbour, surrounded by cliffs. We walked around the city for some time, admiring the cottages and Victorian villas, noticing lots of cozy little cafes and tea rooms, then we followed a path along the banks of overhanging cliffs and green rolling hills overlooking the picturesque harbor with lots of expensive yachts. Then from the harbour we went up the Laterna Hill, where there is an old chapel dedicated to St. Nicholas with the oldest operating lighthouse in the United Kingdom, it has been emitting a light for more than 650 years. At the end of our day, we had a rest on a beach of golden sand not far out of town. There are secluded coves and beaches as well as tunnels carved into the rock in the 1820s. As in other British resorts , there is a similar nautical atmosphere with the sound of the surf and the screaching of seagulls above but at the same time, you will never forget or mistake this town for any other in Britain. 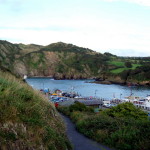 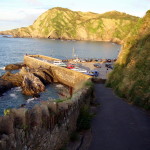