The British Isles are made up of 1,374 islands, England has wind, heat waves and cold spells. The English weather, along with its geography and geology, shapes England.

The weather has stayed the same for centuries, the climate is temperate, rainy and dictates the national character, the 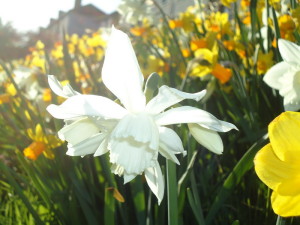 way people look, the way they dress, the way the country looks. But it is also very accommodating to a huge variety of plants, animals and humans.

The Gulf Stream is key to the climate. London shares the same latitude as Irkutsk in Siberia and Calgary in Canada yet the climate is not sub-Arctic.

The warming influence of the Gulf Stream is largely the reason why England is so compressed with villages every few miles. The wonderful weather conditions have allowed people to settle just about anywhere they wanted for thousands of years. The geology of gentle landscapes and quality agricultural land has encouraged widespread settlements all over the British Isles.

There are incredible variations in geology over relatively small areas; no other country in Europe packs so many types of stone into such a small area. There are granites, slates and sandstones in the West Country, while in Yorkshire there are lime stones. There are honey-yellows and browns in the Cotswolds and the Oxford colleges are made from Jurassic limestone. England is a small, over-populated island that’s why the people are reserved and private who generally recoil from foreign intrusion.

It is only when one is somewhere other than England that one fully realises the uniqueness of the place. Other people live in places with more extreme weather. For example in New York the summers are hot and the winters very cold.

In many countries, you have to change tyres on your car in winter and summer, you have to

dress properly to go cycling instead of cycling to the office in your suit, you cannot simply go for a walk whatever the weather. Finally, nowhere is very far from anywhere, no one in England is more than 70 miles – or two hours’ drive – from the sea.

London only gets 1,500 hours of sunshine a year. Northumberland gets just 1,350 hours whereas Rome basks in 2,500 hours of annual sun. It only rains, on average, once every three days in Britain. London is dry 94% of the time. The city is drier than Istanbul and south-east England has less water available per person than Sudan or Syria.

Chalk provides the best foundation for sporting pursuits. The down land grass of the chalk downs of southern England is ideal for horse racing and training.

The English country garden has the potential to be more ecologically diverse than the rainforests of West Africa, Malaysia or Brazil. Sheffield has the highest number of trees per head of any city in Europe and the south bank of the Thames in London is so marshy, that is why the north bank was settled first and now has all the major administrative and commercial buildings.