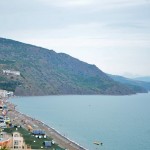 The village of Morskoye used to be called Kapsihor – “scorched earth” in Greek. During excavations, archaeologists discovered many remains of pottery, which may indicate the presence of ancient pottery production in this area.

There are many historical medieval building on Cape Agira – The dilapidated tower of Choban-Kule (“Shepherd’s Tower”) also, the castle remains of the Genoese feudal lords of the di Guascaux brothers who plundered the local population and became famous for their cruelty. They seized large tracts of land from 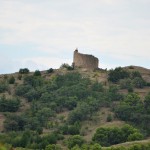 Alushta to Sudak, introduced new taxes and set up their own court for those who did not want to obey them. Even in those days corruption already existed as the Guasco brothers had the support of the consul of Kaffa.

The main value of this coast is in its primordial nature; a clean pebble 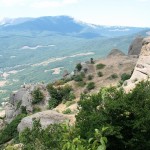 beach along the sea stretches for several kilometres and the pebbles are very unique, grey-black and very-very shallow, almost like sand. Similar to Rybachye, this is a paradise for lovers of outdoor recreation. Students and families with children come here to relax with tents. More than 30 years ago the cult group “Kino” of the rock musician Viktor Tsoy was formed here and in 2011, in memory of musicians on the shore, a monument was erected in the form of a guitar.

In the fields around Morskoye in the valley of Ai-Serez (“Saint Sergius” from Greek), grapes are 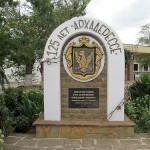 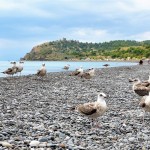 Crimean dessert wines have a unique taste and quality. In addition to the Massandra winery, in the South-East of Crimea there is a winery in the village of Solnechnaya Dolina, where in the ancient Arhadresses wine cellars they produced elite vintage wines for more than a hundred years. The climate in this valley is unique being one of the sunniest places in the Crimea with over 300 sunny days a year with little precipitation, as in a semi desert. Therefore, the grapes here are intensely saturated with sugar, making for a special taste and aroma. Most wines are here are unique.

One dessert wine is named “Black doctor”, garnet-red in colour with flavours of prunes, 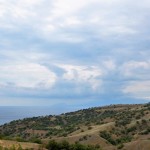 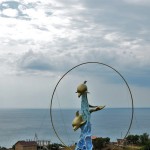 chocolate and vanilla, pear-flavoured and mulberry. The “Black Colonel” wine is a ruby red colour with flavours of prunes, raisins, cherry bones and almonds. The amber colours of the “Solnechnaya Dolina” (“Sun Valley”) wine, has a taste and scent of black currants, chocolate and honey, they are all produced from 30 varieties of grapes. Wine making in Crimea was started and developed by Prince Lev Golitsyn. The wine is held only in oak barrels in the cellars, which were constructed during Prince’s reign in 1888 in a very unusual way dug deep in the ground.

Crimea is known as the island of love and romance, the ancestor of the legendary Atlantis (even though it has no been proven, still most like to believe in a fairy tale, as it will not leave a 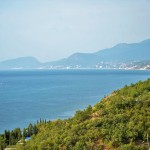 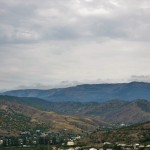 single traveller indifferent). Pushkin in 1830 in a letter to Caroline Sobanskaya wrote “Among my darkest regrets, I relish and revive one thought that someday I would have a piece of land in the Crimea,” wrote. The beauty of Crimea dedicated its strings to all the poets who had ever visited this land. The best way to fill the heart with beauty is by contemplating landscapes. Not only nature is the charm of Crimea but there is always a sense of order, fairy tales, something inexplicable, which the soul always desires. Every traveller, who ever heard the noise of the waves, the cries of gulls, the noisy crickets filled his soul with love, and in quiet serenity, was really happy.

I hope everyone who reads these lines will find his little magic Crimea.