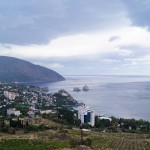 The Ayu-Dag is the largest mountain in Crimea made up from an array of undeveloped rocks left over from the eruption of a volcano in the Middle Jurassic period, the molten magma did not escape to the surface, but solidified beneath the thickness of the sedimentary rocks, forming the dome of the “unsuccessful volcano.” The slopes and the top of the mountain are covered with forest, the mountain stands 2.5 km into the sea and resembles a sleeping bear in shape, about which many legends are composed. Nearby next to the resort of Gurzuf stands a children’s centre “Artek”. 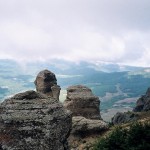 From Yalta via Alushta to Simferopol with a length of 95 km, runs the longest trolleybus route in Europe. In Alushta we turned off the main route on to a winding road along the southern coast of the Crimea leading down to the village of Koktebel.

The Crimean mountains cover a third of the entire peninsula. The south coast mountains with steep slopes and a gentle plateau, are 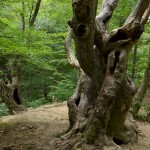 named yayly, from the Turkic word meaning summer pasture. The mountains of the South-Eastern Crimea are of volcanic origin and they have short ridges with soft lined hills covered in forest. In the 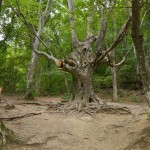 middle Ages the forest was mercilessly cut down by the Turks and exported, which started to cause a gradual climate change. By the order of Catherine the Great, the forests began to be replanted and were only allowed to be cut down after 100 years. The most common tree is Oak, it is fluffy with branches growing from the base. There are about 200 endemics plant species in Crimea. 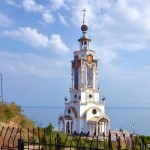 On the way one should stop in the village of Malorechenskoe, where 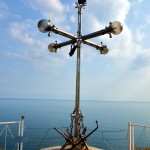 in 2007 a very beautiful church-lighthouse of St. Nicholas the Wonderworker was built. At 65 metres, this is the highest temple in Crimea dedicated to all who died on the waters. The facade of the temple is carved with images of saints and an observation deck in front of the church is decorated with anchors and chains.

Further on a bit we reach Solnechnogorsk, where you turn off for a village called Generalskoye, 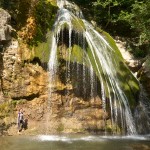 where you will see the most full-flowing waterfall in the Crimea named Jur-Jur, meaning “bubbling.” The Ulu-Uluzen River forms this 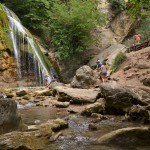 waterfall and it is one hundred meters high, this waterfall never dies as the river flows during all seasons. The Amphitheatre in the village of General is framed from the north by Mount Karabi and Demerdzhi, which keeps it cool in the hottest weather. The path to the waterfall leads through an overgrown forest with old oak, hazel, beech and dogwood trees, August and September is the ideal time to harvest berries from these.

The southern coast of Crimea is beautiful, but the beaches are not ideal for beach lovers, they 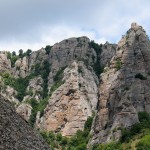 are small, mostly pebbly and often they can only be reached from rocks or mountain paths. From Alushta to the village of Rybachye is a 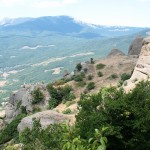 mountainous area covered with forests, without many places for parking cars. Along the coast there are small resort settlements, with private rest homes and boarding houses, if you are travelling by car it is best to know this.

In the village of Rybachye is the first camping site near a sandy beach with clean water, during the whole season the beach is covered with tents. At the end of the summer season in August, the beaches are suddenly empty. We decided to finish our swimming season by the Sea, on this fabulous small and pebbled beach!