The Church of Christ’s Resurrection on the Baydarsky Pass 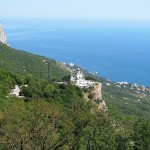 The road from Balaklava to Orlinoe, this was the old Tatar settlement, which used to be called Baydary. Passing through the Baydar Valley which slowly and gradually rises up the mountain pass through the main ridge of the Crimean Mountains. The Baydar Gate 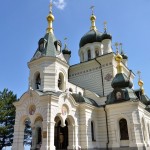 divides the Crimean coast into the Western and Southern regions. Once through the Baydar valley, an old Roman road used to connect it with the South Coast in winter, when storms prevented traffic via the sea. There is only a hiking trail left from the old road through the mountains at an altitude of 500 m above sea level, part of which passes along the Shaitan-Merdven “Devil’s Staircase”, named so because of its difficult stretches in some places. 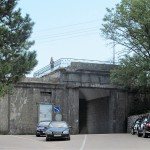 In 1848 a new road was built from Yalta to Sevastopol, a white arch 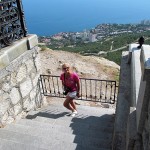 called the Baydar Gate was erected at 527 m above sea level along this road with blocks of white limestone. In 1787, when it was not yet easy to travel along this route, Prince Potemkin brought Empress Catherine to this place.

Approaching the Baydar Gate from the west, travelers gradually climb the mountains along the 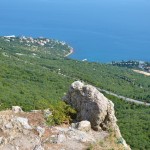 gentle slopes to the pass and the view suddenly opens up a huge panorama of the South Coast, which simply catches your breath. ‘And suddenly you scream, with the feeling of love washing down your mouth, body and soul. All at once the clouds and the bay rise in the gap over the Baydar Gate. ” So, wrote Vladimir Mayakovsky.

The blue unlimited sky merges with the boundless sea and against the background of clouds, one can see the silhouettes of grey rocks and the greenery of forests. At the top of the steep cliff above the valley stands the snow-white Foros Church of 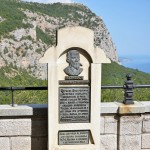 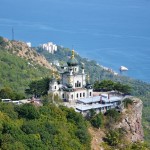 Christ’s Resurrection. The Church was built in 1892 on the Red Rock by the merchant A.G. Kuznetsov, the owner of a large tea company. He bought the land around Foros and built a mansion surrounded by a park. He dedicated the church to the miraculous rescue of the Russian Tsar Alexander III and his family in 1888 during a train crash from Crimea to St. Petersburg.

The church in Byzantine style is not facing east, like all Orthodox churches, but out to sea. In the years of Soviet power, when the Bolsheviks decided not to believe in God anymore, the church was closed and many church relics, icons and valuables disappeared without a trace. During the war, border guards hid in the church, the outer walls were damaged by bullets and shell fragments. When the Germans entered the Crimea, they used the church as a stable.

Once in the postwar period, an Iranian Shah travelled across the Crimea, accompanied by the 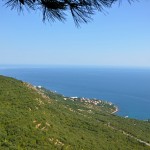 leader of the Soviet Union, Nikita Khrushchev. He invited the Shah to

a restaurant, which was opened in the Ascension Church after the war. To Khrushchev’s surprise, the Shah refused to have dinner in a holy place, considering it a sacrilege. The Soviet leader was indignant and ordered the restaurant to be demolished. By some lucky chance the church managed to survive and in 1991 after the restoration, it was transferred back to the Russian Orthodox Church and now serves its original mission. 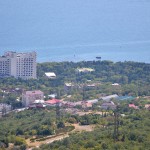 From the observation platform nearby, fabulous landscapes can be viewed around Foros which is located near the cape of Sarych, the 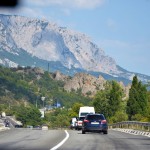 southernmost point of the Crimea. Foros was founded in the 5th century BC by the Greeks who named the village Foros meaning ‘tax’. This small village was recognized worldwide in 1993, when Mikhail Gorbachev, past president of the Soviet Union, who was here at the presidential dacha during the coup d’état. 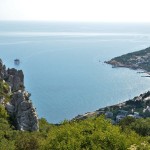 The southern coast of the Crimea is bounded from the west by Cape Aya, from the Greek word means “Holy” and stretches to Kara-Dag. 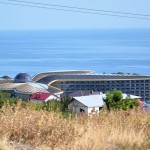 The Crimean southern coastal landscape resembles that of the Côte d’Azur of France, only Europeans do not hear about it because they do not visit Crimea very much. Europeans only hear about this peninsula from history and current political news.

From the Baydar Gate to the Foros church, the road winds its way past cliffs and descending paths down to Yalta.