I always remember with a special thrill this small town on the Black Sea coast of Crimea, because this place has an exceptional appeal and I try to visit there at least one day a year. Novyi Svet has an extraordinary natural energy; I get a new charge of vital energy for the year ahead after visiting this place. This town has a turquoise sea, blue skies with a piney and juniper forest, no wonder it was previously known by the name of Paradise.

The only road leading out of the city of Sudak to Novyi Svet, 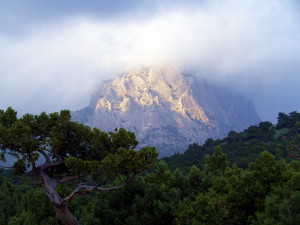 hangs over the sea along the mountain cliffs and only experienced drivers should use this beautiful meandering road around the mountains. You can take a bus from Sudak to the town of Novyi Svet and get there in just 15 to 20 minutes. I recommend hiking along this road which is only about 6 km as the combination of pine aromas and pleasant sea breezes contribute to the delight of the pedestrian with its unusual and natural beauty.

At the end of the road you will reach the east side of the town dominated by Mount Sokol “falcon” in Russian also known by the ancient name of Kush-Kaya “bird rock”, standing at a height of some 477 m, it is called so, because of it’s shape in the form of the folded wings of a bird. Sokol is Europe’s largest ancient coral reef, same as all the other mountains in this area. They contain fossilized coral and shell fossils in their limestone composition. In bright sunlight the rock appears white and at sunset or after rain it becomes a shade of purple. In any case, do not try to conquer this mountain, as there have been occasions in the past where the most courageous tourists had to be rescued by helicopter. On the northern slopes there is a small trail leading to the top but you can only go there with an experienced guide. This mountain is only to be attempted by experienced climbers. Mountaineers from around the world go there to train on its steep southern slopes with special equipment.

At the bottom of Mount Sokol you will enjoy a view overlooking the town. Novyi Svet winds

down like a beautiful natural amphitheater to a Green bay with a sand and pebble beach. The water in the local bay is considered a benchmark for seawater cleanliness throughout Crimea. From the east, north and west the settlement is surrounded by mountains, that’s why there is always a unique microclimate in Novyi Svet.

On the west side of the bay we have another Mount called Oryol known as “eagle” in Russian and the ancient name Koba-Kaya “Cave Mountain”. In this mountain there is a 7 km tunnel hacked out of the rock and where sparkling wines are stored. This is why it’s necessary for me to tell you something about the history of this area as it is directly related to the development of Russian wine making in Crimea.

According to the history of Crimea, after its conquest by Russia in 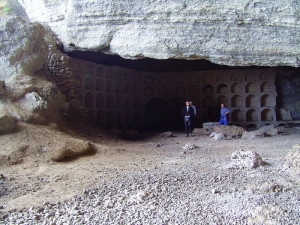 1783, this area named Paradise for some unknown reason was presented to a Savoy nobleman named Galere by Catherine the Great of Russia which was then bought by Princess Galitzina a religious woman who liked the fact that it was called Paradise. She eventually sold it to Prince Kherhulidze who changed the name of Paradise to Novyi Svet (Exact Russian translation meaning New Light, or New World) and tried to set up the first winery in Crimea. When he died it was inherited by his two daughters, one of the daughters Nadejda Zasetskaya who was then married with children in Russia fell in love with the neighbor, a rich Russian Prince named Lev Sergeyevich Golitsyn.

Golitsyn fell in love with the beauty of this natural landscape and in 1878 moved there permanently with Nadejda as his common-law wife. When the romance was over and they finally parted, he bought the land from her and her sister which was then simply a wild landscape.

The Prince then married Countess Maria Orlova-Denisova in 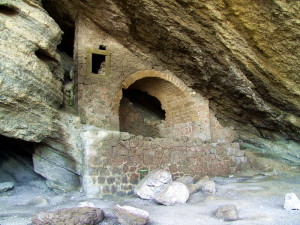 1883 and invested all her money buying additional land to expand his vineyards. He erected a wine factory on the slopes of mount Koba-Koya and constructed a road along the mountain track with tunnels through the rock from Sudak to Novyi Svet. He employed specialists from Greece to build underground tunnels so he can safely store his wines in a constant temperature. There is a natural grotto carved out by the sea 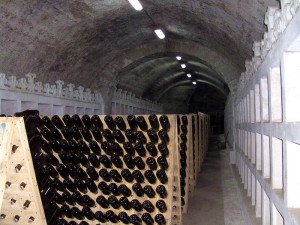 on the south side of Koba-Koya were he created niches along the walls to lay down his wines for guests. A stage 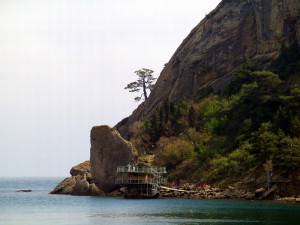 was erected in this cave for the entertainment of his visitors and legend has it that the great Russian opera singer Feodor Ivanovich Chaliapin sang there once. To this day this cave is known as the Chaliapin Grotto. Although, there is no evidence that Chaliapin had ever visited the town. If you walk along a stone path by the sea next to the rock of Koba-Koya you can reach this grotto where you can still see the niches where wines were once stored. 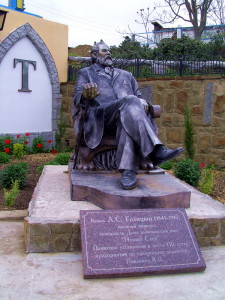 Prince Golitsyn studied at the Sorbone in Paris when he was young and as a student of science and medicine soon acquired the art of wine-making becoming an excellent connoisseur of French wines. The first batch of sparkling wine was produced using the French method in 1882. The quality of this wine improved over the years and in 1900 at the World Exhibition in Paris, this Russian sparkling wine from the Golitsyn factory in Novyi Svet won the gold medal in the nomination of sparkling wines. The celebration dinner was held in the restaurant at the top of the Eiffel Tower in Paris. A well known story tells about a French aristocrat at the dinner who owned a French champagne factory that he could not distinguish the Crimean champagne from his own. After his speech thanking everyone for serving his excellent French champagne, he was informed that in fact he had been drinking Crimean sparkling wine not his champagne. Prince Golitsyn thanked him for the high praise as it proved a magnificent triumph for his Crimean wine.

In 1896 a special batch of this Crimean wine was named “Coronation” and was sent to Moscow for the ceremonial dinner in honor of the coronation of Tsar Nicholas II.

The biggest batch of 60 thousand bottles with the brand name “Paradise” was bottled in 1899 which eventually became known as the sparkling wine “Novyi Svet” and still sold to this day.

To implement his goals in the development and production of this great wine, Prince Golitsyn needed huge funds but these would not be recouped except after the wine was sold in the future. After a period of successful triumphs he ran out of money and was unable to complete his dream of a Great Russian Champagne. The prince then decided to offer his factory as a gift to Tsar Nicholas II of Russia who during his stay in the Livadia Palace in Crimea in 1912 visited the Golitsyn estates where a banquet was held in honor of his first visit. There is an entry in the Tsar’s diary: “…examined grottos which were lit with sparklers, tasted a lot of wine …” As the Tsar left the Cave he was reported to have said, “Now I see everything in a new light!” which is in fact the name “Novyi Svet” in Russian. Prince Lev S. Golitsyn awarded all the wine certificates to Tsar Nicholas II and remained the surveyor of the imperial vineyards at Abrau-Dyurso. 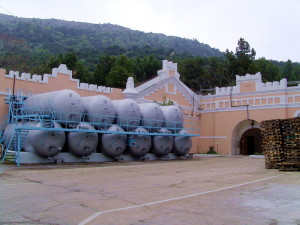 Unfortunately, after the death of Prince Golitsyn the factory 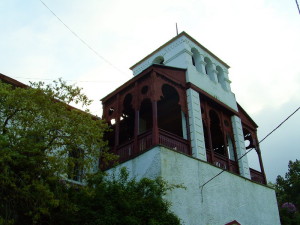 fell into disrepair due to the Russian revolution in 1917 but production of this great wine was once again resumed in 1936. This Crimean sparkling wine has received many high international awards for quality over the years and today produces 17 brands of sparkling wines with various names like “Crimea”, “Prince Lev 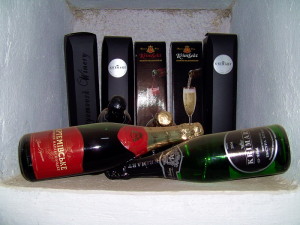 Golitsyn”, “Noviy Svet“, etc. One can visit the tasting room 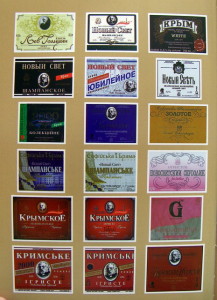 at the factory and try these sparkling wines produced from various grapes such as “Pinot noir”, “Cabernet”, “Chardonnay”, “Aliquot”, “Riesling” and “Sauvignon”. The palace built in a Moorish style, where Prince Lev. S. Golitsyn lived, is now a Museum dedicated to the history of the Crimean sparkling wines factory.

That’s all about this amazing story of the Russian aristocrat who devoted his entire life in the development of the Novyi Svet sparkling wine for the whole world to enjoy.

Lev Golitsyn once quoted “The science of winemaking depends on the knowledge of the locality where the grape is grown.” Next time I will write about the amazing nature reserves of Crimea.

Some photos made by Artem Galinskiy, traveller, and Mariya Kuvshynkina, Crimean guide