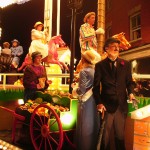 “Season of bonfires” ancient traditions in England are celebrated with torchlight processions and carnivals. Many events have been held for hundreds of years, such as Guy Fawkes on November 5, to comamorate the failed plot to blow up the British Parliament in 1605. Since then, from September to November throughout the country bonfires are set alight, where an effigy of Guy Fawkes is burnt, with displays of fireworks, other events are celebrated with processions and funfairs.

In the village of Mayfield in East Sussex, on the third Saturday of September, an annual carnival and torchlight procession takes place in memory of the Protestant martyrs burned at the stake in the village on September 23 1555, having been convicted by the British Inquisition for heresy.

Queen Mary I Tudor, who ascended the throne after the death of her brother Edward, began the restoration of the Catholic faith and the reconstruction of monasteries destroyed or closed during the Reformation, organized by her father, King Henry VIII of England, who declared royal supremacy over the English church.

Queen Mary, who was a Catholic feared Protestant nobles who had influence in society during the reign of Henry and Edward. Therefore, since 1555 in all cities, around 300 Protestants who disagreed with the Queen’s policy, including the hierarchs of the church, were convicted and burned at the stake. After this Queen Mary was later nicknamed Bloody Mary.

In memory of the Protestant martyrs in some towns of England memorials have been established. The torchlight procession in the village of Mayfield began in the 19th century when Mark Antony a schoolteacher from the town of Lewis published his book about the Sussex martyrs, five of them were convicted in Mayfield and seventeen in the neighboring town of Lewis, after that a tradition was born to hold an event in memory of the martyrs.

Residents from several villages and towns of Sussex participate in the carnival procession along Mayfield’s High street, they dress in costumes of that era, carry flaming torches and are accompanied by musical bands, drummers and sometimes groups of Morris dancers.