Poetical blue lakes, fairytale wild forests, lyrical mountain landscapes, empty beaches – all of these make up Snowdonia, the wonderful national park in northern Wales, once occupied by ancient Celts who worshiped pagan gods. They communicated with the spirits though the wildlife, they didn’t represent their deities based on an image of a human but based on natural things that surrounded them. It becomes clear when you admire this magnificent natural beauty created during the Ice Age.

Snowdon is the highest point in the Cambrian Mountains. One July morning we drove to this place along a 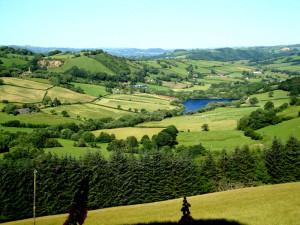 road that runs through the empty hills and mountains of the National park. Looking at these lovely hills they reminded me of the movie of the Englishman who went up a hill but came down a mountain. In Britain they tend call a hill a mountain if its height is more than 1000 feet. The story is about two Englishmen who arrived to measure hills in Wales, the proud welsh people in a small village couldn’t believe that the highest point in their district will be called a hill because it was less 1000 feet. So, all the inhabitants of the village were organized to build up this hill into a mountain, dragging earth to the top by all possible means. I smiled as I would have liked to have seen this mountain, but they told me it was only a legend and a film.

Nevertheless, in this legend the character of the Welsh people was beautifully portrayed. They are descendants of the ancient Celts who lived in Wales and they still speak the classic Welsh language as well as English. I could not understand a word when listening to the local radio station. The language was absolutely different from any others I had heard before. Maybe that is why it sounded so mysterious and mythical. This classic language keeps the history of Wales going down many generations! 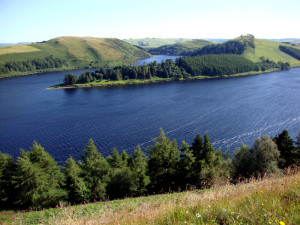 Lonely hills and blue mirror lakes along our way seemed unreal in this beautiful area, mainly because it was absolutely silent. We had a nice journey along twisting roads and the heather fields seemed to be infinite in some uninhabited areas. As soon as we approached some high mountains, the woods appeared thicker with the rivers adding a pleasant natural noise. 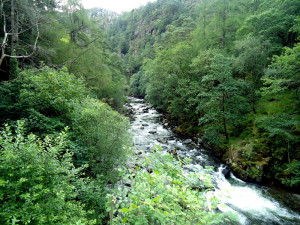 elm, and the hawthorn. They created a horoscope, describing the characters of people on the basis of trees. Who am I on a druid horoscope? A jasmine, maybe this is the reason why this blossoming tree bewitches me! I looked at my partner and I started laughing as he liked figs since his childhood and the fig tree is his sacred tree. May be the blood of ancient Druids flows in our veins? Historians and researchers say that ancient druids occupied the territory of Western Europe, and moved to the British Isles when escaping from a glacier. 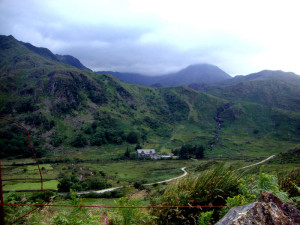 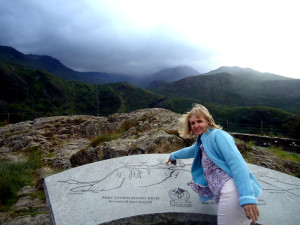 landscape shrouded in fog. The cold penetrating fog came down from the surrounding mountain; it was cold and uncomfortable standing on a viewing platform in our summer clothes. I looked at an old lonely stone house in the valley below and dreamt about a nice warm fireplace. We set off again along the empty road in total silence, with the nature passing us by on the outside echoing of myths and legends of ancient times.

In Betws-y-coed, Welsh name meaning «the temple in the wood» the tourist center was nestling among dense greenery with water falls cascading into the river, almost like the wild Rocky Mountains. You can hear the Welsh language being spoken in the street. The old culture encompasses traditions in poetry and music. Another city on our way was Corwen where tales are told about the Welsh knights and the last Welsh prince, who protected these lands from English.

Snowdon in Snowdonia, Snow Dun translated from old English means “snowball”. In winter these hills and mountains are covered with a white dusting of snow. Let’s visit this white silence next winter…