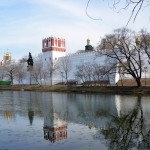 Novodevichy Convent built in the Moscovite Baroque on the river Moscow, is also known as Bogoroditse-Smolensky Monastery, built in 1524 it is probably one of the most beautiful monasteries ever built in the whole of Russia. The building is painted in blood-red and white, white being the symbol of purity and innocence. The Monastery was built on a field named Maiden’s Field (“Devichye”). According to legend, the Maiden’s Field was so called because in the days of the Mongol-Tatar invasion, Russian girls were taken for the Golden Horde.

The monastery was dedicated to the icon Our Lady of Smolensk. In 1046 the Byzantine 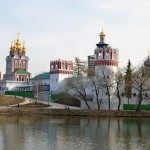 emperor Constantine Monomakh IX blessed his daughter Princess Anne for marrige with Vsevolod Yaroslavich with the icon of the Mother of God Hodegetria, painted by St. Luke. This icon became a shrine for the Russian princes and in the 12th century was moved to Smolensk by Vladimir Monomakh. Later named as the icon of Our Lady of Smolensk, it is said that in 1239 this icon saved the town from the invasion of Batu Khan founder of the Mongolian Golden horde. 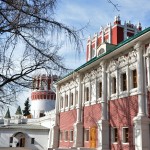 Smolensk was joined to the Grand Duchy of Lithuania in 1449. The Russian Tsar Vasili III, Grand Prince of Moscow, vowed to build a monastery in honor of the return of Smolensk to Russia. In 1514 Tsar Vasily was hailed as a victor in Smolensk with the holy icon of Our Lady of Smolensk. To commemorate his victory and the conquest of Smolensk, the Prince of Moscow kept his vow and in 1524 the Novodevichy Convent was founded.

The Novodevichy Monastery housed many ladies from Russian royalty. According to his will 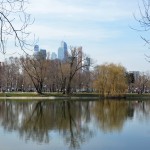 the first wife of Tsar Vasily, Princess of Solomon was exiled to Novodevichy Convent in 1525 and named Sophia, having failed to give birth to an heir after 20 years of marriage. Later the Grand Duchess was canonised as a saint. After that for two centuries, the monastery was used for the imprisonment of Russian queens. 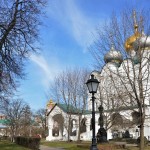 In the 16th century the monastery was burned down by another Mongol ruler Davlet Khan. In 1610 the convent was captured by the Polish troops of Gosiewski. After the Russian army had retaken the monestary, Tzar Michael Fyodorovich installed permanent armed guards. More recently in the days of the Romanov dinasty Novodevichy Convent was restored to it’s full glory.

In 1812, the Novodevichy Convent was nearly burned down up by Napoleon’ army but was 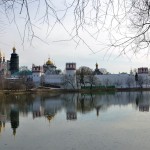 saved by the nuns, who managed to put out the fire.

In Soviet period of the Bolsheviks the Novodevichy Convent was closed down and turned into a Museum of the emancipation of women, a good name for the beginning of the feminist movement. In 1943 Stalin opened the Moscow Theological Institute in the Convent. 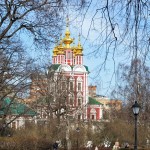 In 1994 the monastery was once again restored as a holy Christian Convent. In 2004 Novodevichy Convent was proclaimed a UNESCO World Heritage Site as an outstanding example in the Style of the Moscovite Baroque with it’s great architecture and it’s finest frescos, it is now open as a place of worship and is also one of the most visited tourist sites in Moscow.