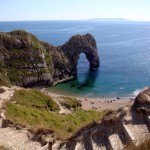 The Jurassic coast in the county of Dorset, has been beautiful patterned by the sea, caressed by wind and sun, creating unusual outlines of faults, rocks and caves. Not far from Lulworth Cove, an 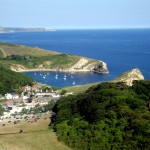 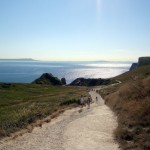 America and the Australian Barrier Reef, which have international geological significance. Durdle Door is the private property of the Welds family, which covers many miles along this coast. Overlooking the site, the nature reserve at the top of the hill is open to visitors. There you can go camping, stay in a mobile home or 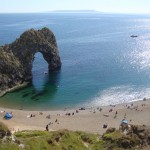 a caravan. A person can stroll along the hills of the coast, where there is a Southwest national walking trail with a total length of 630 miles, includes a path from Lulworth Cove to Durdle Door. 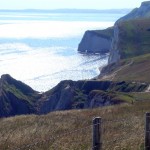 The rocky outlines of the Durdle Door Arch are clearly visible from the tops of the cliffs and surrounding hills. Most paths descend down to pebble beaches with the purest water. At the foot of the rocks, one can find many caves carved out by sea. Where calcareous rocks have not been completely washed out, rocky islets have been formed with interesting names such as The Bull, The Blind Cow, The Cow or The Calf. 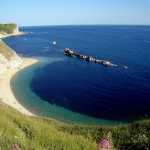 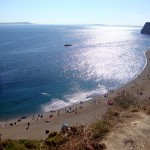 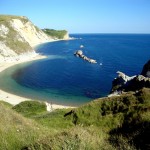 The deterioration of nature’s coastline through time, has created new natural landscape masterpieces, such is the evolution of our beautiful earth. Spending time alone within nature, 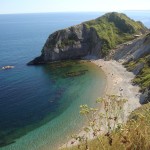 we once again return to our childhood, realising who we really are and that happiness only needs the sun, a clear sky, some mountains, a landscapes that catches one breath or the grace of the sea to inspire peace of mind. We contemplate at the wonders of nature and very rarely forget them.