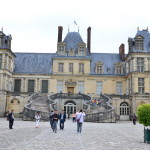 The town of Fontainebleau is 55 km from Paris and is famous for it’s amazingly beautiful Renaissance palace. In the XII century the French monarch Louis VII built a royal country house on the site of a hunting lodge near a spring in the dense forest surrounding it. This inaccessible forest, served as a defensive structure for this medieval castle. The name Fontainebleau in French means “Fontaine = spring” and “Bleau” originated from a person’s Germanic name Blizwald, who was from the family of Francs, who once lived in these lands.

Over the centuries this country house was transformed into a Royal Palace. Francis the 1st in the 16th century reconstructed and transformed the chateau into a royal residence. All the medieval buildings were demolished and the best architects from Italy built a new palace. 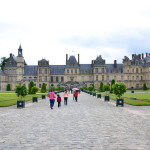 Henry II and Henry IV, as well as Louis XIII where not only born in this chateau but continued to expand it. For some time in history after the death of the last heir of the Valois dynasty the Fontainebleau palace was uninhabited, because the newly built palace at Versailles became more popular among kings. Napoleon Bonaparte revived the estate, when he was preparing to become Emperor.

Alexandre Dumas describes Fontainebleau in his novel “The Vicomte de Bragelonne: Ten Years Later”. There are also a few mystical stories about a ghost who appeared in the chateau and predicted bad events for some of the kings. Important historic events have occurred in this palace, one of them was the visit by the Russian Czar, Peter the Great in 1717. By a fateful coincidence Napoleon Bonaparte signed his abdication from throne room of Fontainebleau palace, before being exiled on the Island of Elba. Later in his memoirs Napoleon recalled Fontainebleau “… the true residence of Kings, the house of the centuries”.

From Fontainebleau we drove through the most beautiful dense forest that surrounds the estate on our way to Paris. We were warned about a railway strike, which had created difficulties moving through the city. So we bypassed Paris and on the way to Calais made a stop in the beautiful city of Amiens. 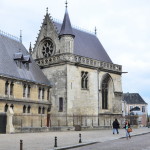 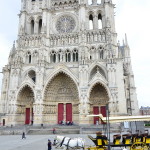 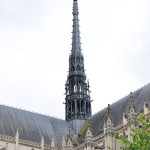 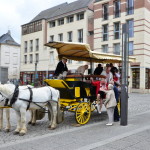 Amiens experienced many events and wars in its history and had 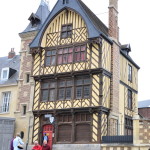 been attacked by barbarian tribes, Normans, Spaniards and Germans. Severe damage was inflicted on this city during the two world wars of the last century. Nevertheless, a lot of historic buildings have been preserved, the main one being the magnificent Amiens Cathedral built in a Gothic style. 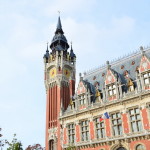 Our travel for 14 days around Europe ended in Calais. The history of this city, as I wrote earlier, was connected with the name of the French President Charles de Gaulle, who said, “There is no better country than France.” Maybe he was right in some way; in any case, I have yet to meet a person who has visited this country and not fallen in love with it’s beautiful countryside, buildings, food and music.

Like Mark Twain said “Travel is fatal to prejudice, bigotry and narrow-mindedness”. Also 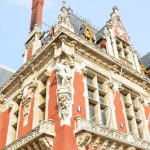 traveling makes us enjoy life and inspire us with new impressions and pleasant surprises about other places. There were plenty of these during our 16-day European voyage. Waiting for the ferry in Calais to cross the English Channel I could not help wondering when I will next travel to new horizons and what wonderful new experiences I might encounter…